Ayushi Gudwani, working at McKinsey & Company as a Senior Manager, faced a problem that most of us would be familiar with. She found it difficult to find well-fitted office clothes. She would shop abroad, but even those clothes were not a perfect fit. So, when entrepreneurship beckoned, she knew what she would like to do.

Gudwani left her job in 2015, and with an inch-tape in her bag, went on a discovery of why clothes don't fit. She measured close to 300 women and sat for hours with well known tailors and designers. The end-result was FableStreet, an online premium work-wear brand. "The idea was close to my heart. I personally associated with it," she says. But she knew that only passion won't be enough. The idea had to be scalable. "The execution was well thought out. We created a database of 1,000 measurements. We manufactured test-fits on the basis of analytics. We got it almost 80 per cent right in the first attempt," she says. Gudwani now plans to monetise her database.

To build credibility, Gudwani bootstrapped her first collection with Rs 40-50 lakh and launched it in February 2016, offering custom-fit apparel with only three body measurements. She has received the first round of seed funding from Kanwaljit Singh, MD, Fireside Ventures; Harmeet Bajaj, Investor, Impresario Hospitality and Founding Member, NIFT; Pameela P., Senior Director, Unilever Global; Fusiontech Ventures; and others. Gudwani is looking to raise more funds by the end of this fiscal year. 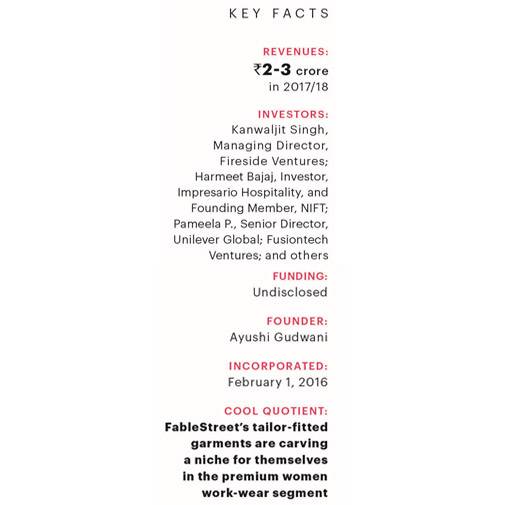 She is also planning to start a studio in Delhi and pop-up stores in various cities to onboard customers, who want to "touch and feel" the garments before purchasing them. She has a customer base in the US, Australia, the UK, Dubai, and Singapore.

Gudwani is betting on the projected rise in online retail for future growth. Apparels account for 29 per cent e-commerce retail, second only to electronics, which has a 48 per cent market share. "The rise in the number of women in the workforce has given an impetus to the adoption of western wear, especially in urban India. This, coupled with rising awareness about trends, is expected to have a spillover effect for western-wear adoption in Tier-II and Tier-III cities," says Harsha Razdan, Partner and Head, Consumer Markets, KPMG in India.

Gudwani is aware of the challenges of working in the online retail space. For one, the difference between online and offline retail space has eroded, she says. "From a marketing perspective, no matter what you do, the primary mode of ads is Facebook. Online advertisement is now as expensive as TV and billboard advertising," she says.

The sheer number of brands is also an issue. "Many brands have created lack of faith among consumers. It is very hard to make them believe this could be good. The immediate assumption is of mistrust," she says. But FableStreet has managed to grow at 30-40 per cent for the last seven-eight quarters. Interestingly, the return rate for its products is negligible, in contrast to most e-commerce players. Besides, it earns half its revenues from repeat customers. FableStreet has already done about $400,000 (Rs 28.6 lakh at Rs 74.15 to a dollar) in revenues so far this year and is expected to close FY19 at $1.3-2 million per annum (Rs 10-15 crore).

FableStreet doesn't keep inventory. It follows a just-in-time model and gets the garments made post order. The corporate office, in Delhi's Lado Sarai, looks like a quintessential garage start-up. Running a start-up as a single founder is not easy, admits Gudwani. "I have worked as a chief sweeping officer, chief admin officer and chief operating officer. I would look into a broken toilet and also speak to CXOs to raise funds," she says. What keeps her excited is the impact of what she is doing. "When customers write a personal message appreciating my work, it makes my day. It keeps me going," she says.