SpiceJet has to deal with a host of legacy issues before it starts to fly high again. 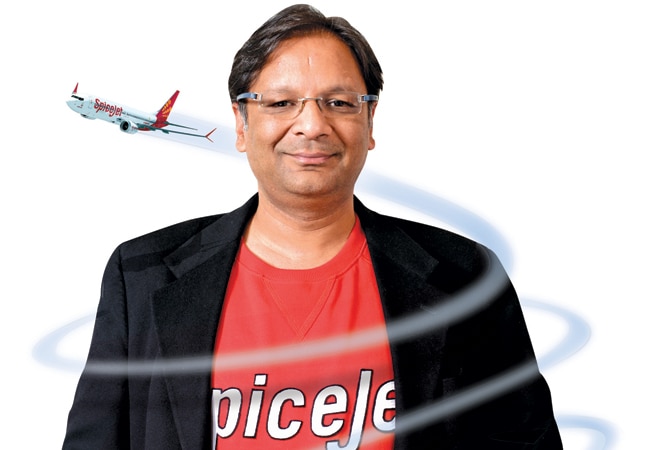 Back in the saddle: SpiceJet's Ajay Singh (Photo: Shekhar Ghosh)

Ajay Singh is a man on a mission. Singh, who co-founded SpiceJet in 2005, emerged as the airline's saviour in late December after the low-cost airline came close to shutting down. He is now spending roughly 13 hours a day at work trying to put the airline back on its feet. Operating out of the first floor of SpiceJet's Gurgaon office, Singh is trying to reverse some of the big steps that were taken by the previous management, including the decision to introduce 78-seater turboprops by the former CEO Neil Mills.

But the turnaround won't be easy, given that the airline has a slew of legacy issues. Its problems include two types of aircraft in its fleet, a pile of dues, a high employee-plane ratio, mounting losses and a brand image that has been hurt in recent months due to a series of flight cancellations and passenger dissatisfaction.

As a first step, SpiceJet has to move towards the low-cost carrier (LCC) model. Globally, successful LCCs such as Southwest Airlines, Ryanair and JetBlue have followed the one-aircraft model. SpiceJet, even though it is an LCC, has two types of aircraft - Bombardier Q400s and Boeing 737s.

SpiceJet bought Q400s in 2011 for short-haul flights connecting large cities - Hyderabad, Delhi, Chennai - with regional hubs as many airports in these smaller towns were not capable of landing large aircraft. For instance, airports at cities like Dehradun and Dharamshala have runways capable of handling only small aircraft (ATRs and Q400s). Moreover, Q400s made sense because they are fuel-efficient. Without realising that it could potentially increase the overall costs in the long term, SpiceJet placed an order for 30 such aircraft.

SpiceJet report card
Today, it has 15 of these jets in its 32-strong fleet. The problem is that a fleet containing two different types of aircraft increases operational, financial and managerial complexities. For instance, an airline needs to keep different sets of pilots, engineers and crew; different contracts and additional cost of maintenance, repair and overhaul (MRO). "If I was there, I would not have bought them. Now that they are there, I have to see how best I can use them so that they are profitable for the company," says Singh.

Also, SpiceJet owns these Q400s, unlike the Boeing 737s that it has leased. So, the company cannot return the Q400s and the options it has is to either sell or lease these jets. For now, the Q400s have been included in the summer schedule because Singh doesn't want to create a vacuum all of a sudden. "These planes can be sold. Let me see if I can first make money from them. If I sell them, I don't know what price I will get. We will have to consider everything," he says.

Amber Dubey, Partner and India Head of Aerospace and Defense at global consultancy KPMG, says the aviation industry in India and Asia-Pacific is seeing growth of regional carriers. This may provide SpiceJet a chance to sell or lease out the Q400s, though it may take some time to address the contractual issues.

In order to be profitable, an LCC should fly to only a few airports and build frequencies on those routes. SpiceJet, which recorded a net loss of Rs 275 crore on revenue of Rs 1,311 crore in the quarter ended December 2014, earlier operated at several airports that had only a handful of daily flights. That is changing now. As part of its proposed summer schedule, the airline has suspended services to six cities, including Belgaum, Indore, Aurangabad, Lucknow, Surat, and Thiruvana- nthapuram. "Around 30 per cent of the routes were not profitable to operate. A large number of those routes have been removed in the revised schedules," says Singh.

At the same time, it has added more flights to a number of domestic sectors such as Delhi-Amritsar, Bangalore-Mangalore, Delhi-Jaipur, Delhi-Udaipur, and Hyderabad-Tirupati, among others. "SpiceJet has to completely restructure its route network, and Singh and his team will have to set this right at the earliest," says Kapil Kaul, CEO (South Asia) at aviation consultancy CAPA.

Since last year, SpiceJet's daily departures are constantly moving up and down. Till last July, there were some 345 departures, which have come down to 209. The departures will increase to 280 in summer as the fleet size will reach 40 with the addition of more Boeings. "We want to increase the fleet to 46-47 in the winter schedule depending on demand. The expansion is happening on the Boeing fleet," says Singh.

Strengths and weaknesses
Singh's turnaround plan for SpiceJet has gained momentum over the past few weeks. On February 23, the entire 58.46 per cent stake of media baron Kalanithi Maran and Kal Airways Private Ltd in SpiceJet was transferred to Singh. The deal has also received approvals from the civil aviation ministry and the Competition Commission of India.

The regulatory clearances were followed by Singh pumping money into Spicejet, which was used to clear statutory liabilities - service tax and tax deducted at source, employee salaries and bank debt. Currently, all salaries are paid on time, he says. Since the change of ownership, SpiceJet has seen infusion of some Rs 500 crore from Singh. As per the plan, the airline will get Rs 1,500 crore of fresh infusion in three equal tranches of Rs 500 crore by the end of April. Singh says he doesn't have any partners right now. "I am the only investor. The equity belongs to me and I am the only person involved. For the subsequent pieces of infusion, there are offers from both equity and debt investors. The stock price is low now. We have to take a call on whether we want to infuse equity at this stage or do we need to wait for a while," he adds.

The airline still owes around Rs 1,000 crore to vendors and lessors, as well as engineering payments and some airport dues. Singh says he is working with these partners to draw a payment plan. "It is tough to put a timeline now [on the repayment schedule]. We are hoping that in the next one quarter we will arrive at the settlement regarding payment plans," he says.

Besides repaying dues and rationalising its network, SpiceJet is working on other areas to bring down non-fuel costs. It has rationalised its workforce. However, more needs to be done. As per the global LCC standards, an airline should not have more than 90 people per aircraft. In early 2013, this figure stood at 140 for SpiceJet. It has been brought down now. In the summer schedule, it will be 95-97 people per aircraft, according to Singh, who adds that "some people have been asked to go, some have gone by themselves."

A major factor in SpiceJet's favour is the drop in aviation turbine fuel (ATF) prices. ATF prices, which account for some 45 per cent of costs, have declined by over 34 per cent since October 2013. Lower ATF translates into 13-15 per cent reduction in an airline's overall costs.

One of the main reasons that brought down SpiceJet under Marans was the frequent flash sales - fares offered at lower rates to drive ticket sales. It seems that even the new promoter is following the same path. Since January 28, there have been six flash sales by SpiceJet, the most recent being the "Colour the Skies" offer for Holi where tickets for domestic flights are sold at Rs 1,699 and international flights at Rs 3,799. A total of 1,00,000 seats are on offer under this sale. Singh says these are the seats that would otherwise remain unsold. "It would not be more than four to five per cent of total seats. Also, [flash] sales are an interesting way of stimulating demand. Due to suspension of service, the carrier had become a little unreliable. People had stopped thinking of flying on SpiceJet. These sales allowed people to sample SpiceJet again," he says.

Meanwhile, investors have shown a renewed interest in SpiceJet's stock. Since the beginning of 2015, the stock price has jumped about 31 per cent. The investors are looking at the growth potential of the aviation market in India. The total passenger traffic is likely to surge from 101 million in 2014 to 367 million in 2034, the trade group International Air Transport Association (IATA) estimates.

In January, the airline's passenger load factor (PLF), an industry term for measuring seats occupied as a percentage of total available seats, was at 80 per cent, which was the lowest in the last six months. Singh is hopeful that the PLF in February is going to be in the mid-80s. "Our on-time performance is going to be one of the best in the industry. Every flight which is delayed by even five minutes needs to be reported to me. I am getting regular text messages. When people know that I am looking at each flight, then everybody tries to be careful. Once you see flights follow schedules, you see improvement in bookings," Singh says.

In his previous stint of poll campaigning with the BJP, Singh helped the party to reach new heights. He hopes to revive the airline's fortunes in the same fashion.