Private equity funding of asset reconstruction companies will transform the bad loan market, but for that complete control over the acquired assets is a necessity. It was in February 2014 that the board of International Asset Reconstruction Company (IARC) met in Mumbai to discuss the company's growth plan in the distressed assets market. They took a look at the big picture. The pile of bad loans in the hands of the Indian banks was huge and they were trying hard to improve their asset quality. For the fifth-largest asset reconstruction company in India (ARC), this meant more growth opportunities. IARC decided to chase large assets in the ARC space.

The logical next step was to look for resources to expand. A decision of the Reserve Bank of India (RBI) in December 2013 turned out to be propitious. The RBI had made a few key changes in the ARC regulation that opened the gates for private equity in the ARC market. It was around this time that the New York-based global investment firm KKR and Co was looking for a toehold in India.

For KKR, setting up a new ARC would mean at least 18 to 24 months just to get permission. The next feasible option was to pick up a stake in any of the 14 cash-starved Indian ARCs. "The RBI wanted private equity (PE) firms to come into the ARC market at a time when we were scouting for partners to support our additional capital requirement," says Birendra Kumar, Managing Director and CEO of IARC. 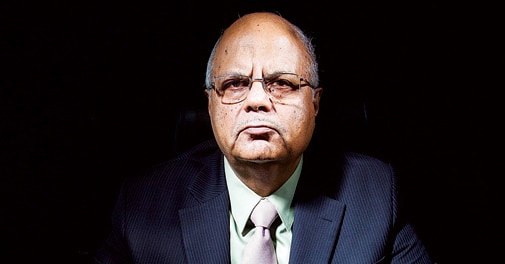 A senior industry official said that KKR wanted to enter the market on its own but the RBI wanted the company to enter quickly and ease the burden of banks. Looking for global partners with expertise and bandwidth, IARC found a perfect choice in KKR. The PE firm will initially pick up a 15 per cent stake worth Rs 300 crore, which in the next three years will go up to 51 per cent.

Rs 2,000 CRORE
Amount IARC will be able to raise from the market after the fund infusion from KKR

In return, KKR will get a toehold in the ARC space with rights under the Securitisation and Reconstruction of Financial Assets and Enforcement of Security Interest Act, 2002 (Sarfaesi Act). The Act gives the lender the right to acquire the assets of the borrower if it fails to repay within 60 days after a notice is served. The deal is likely to be ready by the end of 2014/15. "We are awaiting some government clearances, including an approval from the Foreign Investment Promotion Board," says Kumar of IARC.

This implies a front-door entry for PE players in the bad loan market. Recently, Hong-Kong-based SSG Capital Management had acquired a 49 per cent stake in Asset Care Reconstruction Enterprise (ACRE). While KKR did not say much about the deal, it did say that it is serious about the distressed asset space in India. "PE requires the teeth and ARCs provide just that, which is why they [KKR] have tied up with us. The real idea is to go in for a complete buyout of the distressed asset, take over the management and revive it, which is the international model," he says.

With KKR's fund infusion, IARC will be able to raise Rs 2,000 crore from the market, too. "While we look for more business, KKR will bring with it global experience in risk model, turnaround and underwriting. Capital will come from KKR, too," says Kumar.

THE ROLE OF PEs

PEs are often seen as predators but inviting them to the ARC space was the last option left with the RBI. The non-performing assets (NPAs) - restructured and stressed assets - had piled up to Rs 6-8 lakh crore. The new capital needed to revive could only come from PEs as Indian banks are struggling with liquidity issues. P. Rudran, managing director & CEO, ARCIL
"With bigger players coming into the market, we can see more buyouts. Banks will also be willing to sell the assets if they get money upfront,"says P. Rudran, Managing Director and CEO of ARCIL, the second-largest ARC by asset under management (AUM).

Fund infusion into ARCs would help it pay upfront and get assets at a cheaper price. More funds at disposal means ARCs can wait for a longer period so as to increase the asset value. Also, PEs or non-banking finance companies (NBFCs) can give additional funding for working capital by priority funding or by fund infusion in equity capital.

"Converting 26 per cent of the debt into equity is possible under the restructuring scheme. ARCs can cash upon such conversion after three to five years when the company revives. However, such cases aren't many and the ARCs do not have the capacity to wait for a long period," says Rudran. According to Kumar of IARC, due to fund crunch, ARCs often end up looking for smaller assets where settlement is the option. "When you look at large assets, we think of recovery and revival. Only when revival fails do we go on to acquire assets. With strategic investors like KKR, the mindset is to recover the asset by infusing more capital," he says.

Currently, the total outstanding security receipts of the ARCs is only about Rs 52,000 crore. Of this, Edelweiss ARC, ARCIL and JM Financial ARC account for three-fourth of the market. But even the RBI move to bring in PE firms won't see a large-scale shift in the crucial role played by ARCs in supporting the banks' NPAs. "The question is: are enough assets available to ARCs at the right price so that their [PE] return expectations are satisfied,"says Siby Antony, Managing Director and CEO at Edelweiss ARC, the largest ARC by AUM. While there will be some deal wherein large funds look for and get large distressed assets, a majority of the NPAs will remain outside the purview of fund infusion, says Antony. Another reason is that market regulations don't allow PE players a complete buyout of assets through the ARC route. "Today the regulations are not conducive. In India, management takeover is allowed but once you revive the asset you have to return the asset to the old management. There is no upside for the investors. There is no risk-based return," says Anuradha Unadkat, President and CIO, IARC. However, Kumar is confident that this norm will change soon. "We have made a presentation to the RBI for this if we have to attract foreign money. I think the RBI is seriously considering it," he says.

In Budget 2015/16, Finance Minister Arun Jaitley has treated NBFCs with assets of Rs 500 crore as financial institutions under the Sarfaesi Act. "Today ARCs will be able to buy assets from NBFCs," says Rudran. Though an indirect buyout is possible, Rudran says, until the regulations are not changed, a complete buyout in distressed market is not possible.

He also stressed the need for a level-playing field between NBFCs and ARCs. While ARCs are highly regulated institutions focused on asset recovery related business, the spectrum of activity for NBFCs is different, says Rudran. Allowing full access to PE can definitely give a new lease of life to ARCs mainly because the RBI, in the last two years, has been tightening the operational parameters.

Initially, ARCs were allowed to buy assets from banks without paying anything in cash. ARCs used to issue security receipts (SRs) of the value of the assets to the banks. In September 2006, the RBI asked ARCs to put in five per cent of the value of the acquired asset. This was further revised to 15 per cent in August 2014.

The aim was to improve the ARC's stake in resolution of NPAs. But this became a deterrent in the sale of NPAs by banks to ARCs, leading to a dip in the number of deals between banks and ARCs. According to the ARCs, banks are not agreeing to bring down the valuations even when ARCs are paying three times more than what they were required to pay earlier.

Form IV
"Earlier, in five per cent you could buy assets for 80 cent for a dollar. Now you can't. It would depend on recovery potential and second the management fee will depend on the lower range of the Net Asset Value (NAV). You have to get additional funding," says Kumar of IARC.

The RBI raised the capital requirement because ARCs still managed to make easy money and the real purpose of reconstruction was defeated. ARCs get 1.5 per cent as AUM fee, which meant on a five per cent investment they were making a 30 per cent rate of return in fee. With the increase in capital investment, this has dropped to 10 per cent.

Also, earlier ARCs could recover the AUM fee based on the outstanding amount but now it is based on the NAV ratings of the SRs. For instance, today you may have an NAV of 100 but if the rating on the NAV is around 75 and 100 then the fee would be based on the lower end of the NAV.

"Today recovery becomes an important factor. With increasing contribution, selling banks are not reducing their reserve price. They need to bring it down," says Rudran of ARCIL. Antony of Edelweiss ARC underscores it by pointing out that the biggest challenge for an ARC is capital. "The cost of capital for them is high. Return expectation is a function of the cost of capital for an ARC. All players look for returns upwards of 25 per cent. In that sense return expectation of 20-22 per cent is reasonable and thus valuation will change and pricing will depend on the ability to recover," he says.

So today ARCS need additional funding and that's where PEs and NBFCs come into relevance. In 2013/14, the principal outstanding amount was 70 per cent, which means if the asset was worth Rs 100, banks were selling the asset to ARCs at Rs 70.

Today due to the 15 per cent mandatory investment by ARCs, banks will have to lower their prices. They will have to sell the same asset at Rs 50. "For a 20 per cent internal rate of return (IRR), the acquisition cost was 70 per cent for the industry. Despite that ARCs were left with money on the table. Today with the new norms if ARCs have to maintain an IRR of 20-22 per cent, pricing of the asset has to change," says Rudran of ARCIL.

Meanwhile, the ARCs have become more choosy in asset buys and capital allocation. This has slowed down the rate of deals forcing the NPA sellers to make the asset price more realistic and attract ARC capital. In the last six months, banks have not been selling distressed assets and the NPA levels are going up. It is not that banks don't want to sell. Their worry is if they sell an asset at 50 to 60 per cent discount, then the branch manager will be asked how he/she lost 50-60 per cent of the asset value.

"Sooner or later the lid will blow as banks can't sit for a long time with superficial reserve prices," says Kumar. "The ARC was always a deep-pocket game. The problem was because players had shallow pocket the unfair practice of management fee came into effect and banks too weren't bothered as they were able to push their bad assets and get money. They did not look if the asset is redeemed or not."

With banks raring to increase liquidity and with the entry of PEs, it is only a matter of time when pricing expectations get aligned and deal-making picks up. The need for more capital together with the restriction on complete buy-outs means that funds will flow through the ARC route is the more likely outcome than a shake-out or consolidation within the sector.