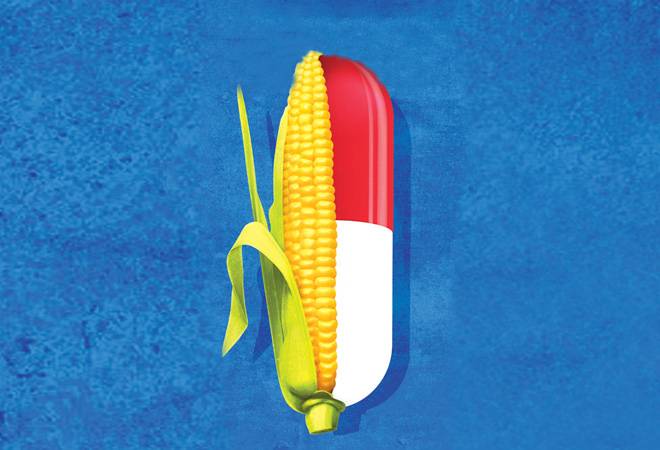 A far as mega mergers go, the one between Bayer and Monsanto did not get off to a great start. Just months after Bayer bought Monsanto in a $63 billion deal, its shares were battered after a Northern California jury asked it to pay more than $2 billion to a couple who said they developed cancer after using the company's glyphosate-based weedkiller Roundup, part of the Monsanto portfolio. Though a court later reduced the penalty to $86.7 million, the damage had been done, with Bayer losing almost 30 per cent market capitalisation since the merger. The allegations around Roundup have triggered thousands of cases against Bayer across the world, mainly in the US.

In India, the world's fourth-largest producer of agrochemicals, things have been calm. The merger, in fact, is progressing smoothly, with Bayer and Monsanto managements expecting substantial savings from synergy and a big impact in the $4 billion (Rs 28,000 crore) Indian agrochemical market (where the top five-six players account for majority market share) that the merged entity - with 14-15 per cent market share of the organised crop protection market - hopes to dominate. The market is expected to double to $8 billion by 2025, according to a Ficci report. Bayer and Monsanto, with a number of complementary strengths, are seeking to make the most of this high growth. 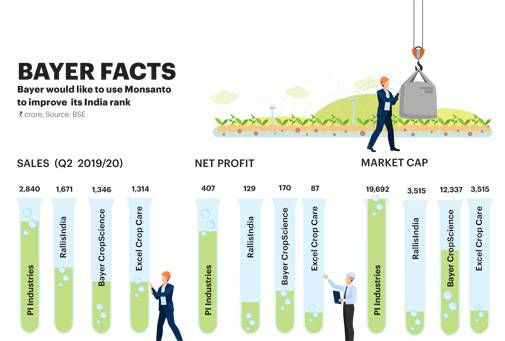 Bayer's crop science business in India has four manufacturing sites, including a global site at Vapi and a multi-crop breeding centre in Chandippa, Hyderabad. It is strong in crop protection products such as Infinito (fungicide), EverGol Xtend (seed growth), Velum Prime (insecticide), crop nutrient supplement Ambition, herbicides Alion Plus and Council Activ, hybrid seeds like Arize and vector control (mosquito management) insecticide Aqua K-Othrine. It has strength in plant and soil health, chemistry skills, and has a solid biologics platform.

Monsanto, on the other hand, has three manufacturing facilities in India - a herbicide plant in Silvassa, a corn conditioning plant in Shamirpet, Telangana, and a vegetable seed production plant in Deulgaon Raja in Maharashtra, besides three breeding sites, including a station focused on corn and vegetables in Kalinayakanahalli, Karnataka, a corn breeding station in Udaipur and a global R&D centre in Bengaluru.

This is apart from strength in seeds with leading brands like Dekalb, one of India's largest selling hybrid maize seed brand and India's largest selling glyphosate herbicide Roundup, besides vegetable seeds under the brand Seminis. Besides, Monsanto is good in R&D in breeding, improving yields, digital farming and next generation technologies. Though their market share varies from product to product, both have multiple leading brands in different crop protection and seed segments. Both have been listed in India for decades.

In India, the 'Scheme of Amalgamation' of Monsanto India Ltd with Bayer CropScience Ltd became effective on September 16. The integration is on. Will it be a safe 'marriage' in India considering the trouble the merged entity is facing elsewhere due to glyphosate and other issues? After all, in the US, the merger had faced intense regulatory scrutiny and was approved only after Bayer agreed to sell its competing Liberty herbicide business, cotton, canola, soyabean and vegetable seed businesses, some R&D projects, and its digital agriculture business, so as not to create a monopoly. Competitor BASF bought these for $9 billion. 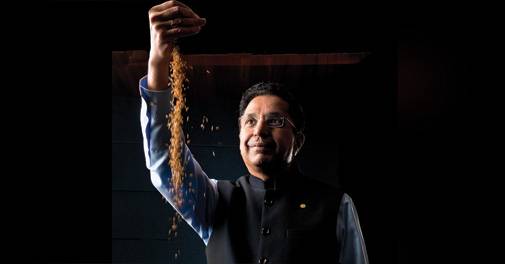 "Indian farmers have known both Bayer and Monsanto for decades and coming together of the two will help them access a better and larger portfolio of crop protection products and seeds," says D. Narain, Senior Bayer Representative, South Asia; and MD, Bayer CropScience -- Photograph by Rachit Goswami

"Unlike many global mergers, we don't see any cultural integration or other issues here. Both Bayer and Monsanto have been in the Indian agriculture space for decades and are truly Indian than MNC subsidiaries," says Simon Wiebusch, Chief Operating Officer, Crop Science Division of Bayer for India, Bangladesh and Sri Lanka. "Indian farmers have known both Bayer and Monsanto for decades and coming together of the two will help them access a better and larger portfolio of crop protection products and seeds, next generation agricultural practices, and improve their yields and profits," says D. Narain, Senior Bayer Representative, South Asia, and Managing Director, Bayer CropScience.

Bayer CropScience has considerable strengths in crop protection and environmental science products and hybrid seeds. The Vapi site, where it has invested over Rs 860 crore, produces active ingredients and intermediates for application in crop protection, animal health as well as home and garden applications. Bayer Cropscience had a total income of Rs 2,787 crore in 2017/18 and Rs 2,722 crore in 2018/19. Besides Bayer CropScience, Bayer has third-party manufacturing arrangements for pharmaceutical, animal health and consumer health products in India and a joint venture in pharmaceuticals with Zydus Cadila, called Bayer-Zydus Pharma.

Monsanto has also been present in India since 1975. Monsanto India (MIL) focuses on corn seeds, formulation and sale of glyphosate-based herbicide and has an IT-based mobile platform that provides farmers information on agronomic practices. Besides, Monsanto operates a private company Monsanto Holdings, which sells vegetable seeds and offers contract research and shared services. Monsanto Holdings also has a joint venture with Maharashtra Hybrid Seeds Company (Mahyco), Mahyco Monsanto Biotech, which licenses cotton traits to various Indian seed companies. For half year-ended September, the combined entity of Bayer CropScience and Monsanto had revenues of Rs 2,296 crore, compared to Rs 2,140 crore in the corresponding period a year ago, and PBT of Rs 497.8 crore, compared to Rs 491.3 crore in the year-ago period (after regrouping accounts to align with the global merger on June 7, 2018).

The Merger and Inherited Troubles

Four years ago, Bayer decided to re-invent itself as a life-science company focused on health and agriculture. The trigger was the massive changes in the global agriculture space where some of the biggest players were merging. In 2017, DuPont merged with Dow Chemical to form DowDuPont, and a year later, ChemChina acquired Syngenta.

Bayer's acquisition of Monsanto, two years later, was part of a vision to create the world's biggest agrochemical and seed company. Monsanto, a predominant seeds company, offers Bayer an opportunity to become bigger in seeds and related technologies. Besides, Monsanto was one among the first to establish the futuristic 'digital agriculture' business. The merger was completed in June 2018. Weeks later, the glyphosate issue blew up. The International Agency for Research on Cancer, part of the World Health Organization, issued a report in early 2015 which said that glyphosate could cause cancer. Though drug regulators and agencies like the US Environmental Protection Agency and the WHO did not endorse this view, thousands of litigations were filed in the US against Monsanto. However, in early May 2019, the US Environmental Protection Agency came up with a report saying that glyphosate is not carcinogenic, which Bayer extensively publicised. Now, Bayer is facing over 40,000 cases, and may have to spend billions of dollars to settle these, say industry insiders. 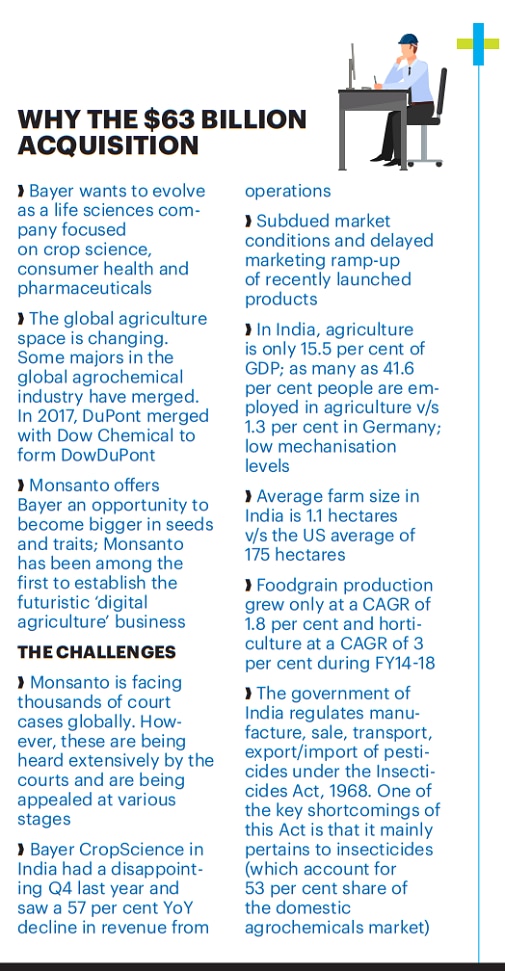 Unlike in the US, the glyphosate issue has not been a problem in India, though Kerala and Punjab had earlier volunteered to restrict its usage. A known molecule in the Indian market for over 40 years, glyphosate is used mainly in crops like tea, sorghum, wheat, maize, soybean, sunflower and cotton. Its market is estimated to be around 30 million litres for which around 90 players with over 70 brands compete. Roundup is the market leader with sales of around Rs 185.66 crore, about 28 per cent of Monsanto's net sales of Rs 667.44 crore in FY18, according to a news report.

Barring the possible repercussions of the glyphosate issue, Bayer is looking at huge synergies with Monsanto in India. "Revenue and cost efficiencies expected from the merger by 2022 will be to the tune of Rs 120 crore per annum and so far the integration progress is on track," says Rolf Hoffmann, Chief Financial Officer, Bayer South Asia, and Director on the Board of Bayer CropScience. The broader areas of synergy would be revenue (leveraging mutual portfolio and channel presence), procurement and supply chain efficiencies and administrative (including IT infra). The one-time integration costs are expected to be Rs 180 crore.

"The merger will bring additional value to Bayer's core portfolio through complementary products from Monsanto India. The merged entity numbers and roll-forward FY21 estimates expected are 18 per cent revenue CAGR and 33 per cent EBITDA CAGR over FY18-21E," Amar Mourya and Himanshu Binani, analysts with brokerage firm Emkay, said in a report in February. As per the data of the Department of Chemicals and Petrochemicals, the production capacity of agrochemical players in India is around 2,92,000 million tonnes (MT) and production grew at a CAGR of only 4.3 per cent during FY14-18. Bayer (with Monsanto) is expected to grow in double digits. The analysts' view is that the merged entity will show acceleration in revenue growth. Given that Bayer has more touch points than Monsanto, the latter's seed (maize) and agrochemical businesses can see acceleration, they said. Their estimate was revenues of Rs 3,994 crore in FY20 and Rs 4,489 crore in FY 21 for the merged entity. 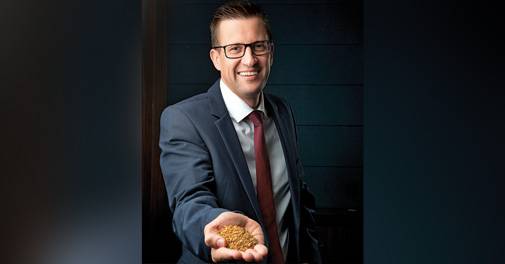 "Revenue and cost efficiencies expected from the merger by 2022 will be to the tune of Rs 120 crore per annum and so far the integration progress is on track," says Rolf Hoffmann, CFO, Bayer South Asia; and Director on the Board of Bayer CropScience -- Photograph by Rachit Goswami

However, analysts with Prabhudas Lilladhar differed after Bayer had a disappointing Q4 last year, when it reported a 57 per cent decline in revenues with high costs leading to loss at EBITDA and PAT levels. They expressed concern over subdued market conditions and delayed marketing ramp-up of recently launched products, while admitting that the aggressive launch pipeline (50 new products by 2022) and the most extensive and professionally planned distribution network were advantages. "The negative publicity around glyphosate and its (possible) ban within India's few states also creates short-term uncertainty," observed Prashant Biyani, an analyst.

The situation has changed following an extended monsoon this year and the merger can bring a lot of new technologies and benefits across the agriculture value chain for Indian farmers, says Narain, who was with Monsanto since 1998 and joined as the Bayer CropScience Head in December 2018.

Farmers will remain the key focus of the merged entity. "We have 5,000-plus field staff to inform farmers about new agricultural technologies and have launched projects to improve their incomes. Our technology and services have reached two crore small farmers. Also, a total of 91,000 farmers have benefitted from food chain partnerships and the Better Life Farming initiative," says Narain.

Also, Bayer has projects like Farmrise, which helps farmers with modern tools such as drones and digital farming. Bayer is also launching Better Life Farming, an initiative to empower 2.5 million small farmers through creation of 5,000 agri-entrepreneurs in horticulture, corn and paddy by 2025. The other partners in the initiative are Yara Fertilisers, International Finance Corporation (IFC), Netafim, DeHaat and Big Basket. "Unlike many global mergers, we don't see any cultural integration or other issues here. Both Bayer and Monsanto have been in the Indian agriculture space for decades," says Simon Wiebusch, Chief Operating Officer, Crop Science Division of Bayer for India, Bangladesh and Sri Lanka -- Photograph by Rachit Goswami

"Cost-effective financing is one of the most critical issues for small farmers and we are looking at roping in partners who can provide viable financing options to small land holders. Our alliance partner, International Finance Corporation, is helping us conduct cost-benefit assessments for the Better Life Farming business model," says Narain.

Considering the focus on farmers, the Bayer-Monsanto combine is sure to remain a key player in India's crop protection and seeds industry.