As footfalls decline at Auto Expos globally, what is the way forward? 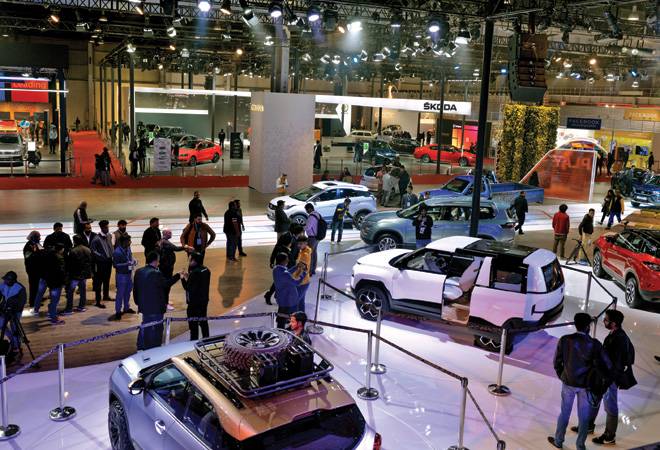 Rajesh Menon, Director General, Society of Indian Automobile Manufacturers (SIAM), one of the main organisers of India's biggest auto show, Auto Expo, heaved a sigh of relief on Sunday evening as the gates shut for the day. The weekend had passed off without a glitch with more than two lakh people visiting the show on the two days. The show could now be called a success. He had not taken it for granted, though.

"I can breathe a bit easy now," Menon said on Monday morning. "The weekend has gone off well. We got the crowd we expected. It is all good."

The intense slowdown in the domestic automobile industry - sales dropped 14 per cent in 2019 - the steepest ever annually in more than two decades, led to a number of dropouts this year. Regulars such as Honda Cars, Toyota and Nissan and luxury carmakers BMW, Audi, Jaguar Land Rover and Nissan decided to miss the expo. They were joined by commercial vehicle makers - Ashok Leyland, Volvo Eicher - and almost the entire two- wheeler industry, including Hero MotoCorp, Honda Motorcycle and Scooters India, TVS, Bajaj and Yamaha. The organisers feared this may land a telling blow to the show and footfalls may drop. The New Delhi Auto Expo is not an isolated case. Globally, major automobile exhibitions are facing an existential crisis as new-age customers, mostly millennials, prefer to stay away from the traditional exhibition format. The axing of the Frankfurt Motor Show - among the biggest shows globally - from the schedule for next year is a case in point.

"The number of auto shows globally is going down and participation in some of the biggest shows such Frankfurt and Tokyo have come down," Rajan Wadhera, President of SIAM, said in December. "Even we were thinking of postponing the event by a year taking into account the slowdown and the disruption that we are facing due to the transition from BS IV to BS VI emission norms in April 2020, but we ultimately decided against it as it would have done a grave disservice to the stature of Auto Expo which has been painstakingly built over the last decade or so."

Participating in a global automotive exhibition is a costly affair and not for the faint hearted. The average rack rate per square metre of space for the Indian expo is around Rs 9,000. This compares favourably with Paris, Frankfurt and Geneva, while Tokyo and Shanghai are a tad more expensive. Effectively, companies end up spending anywhere between Rs 5-20 crore for the week-long event. At a time when the industry is going through a period of prolonged slowdown, not many companies see merit in participating in an expensive marketing event like an Expo. "A number of manufacturers are missing this time as the industry is going through a tough time... In India, the potential is still big, so an event like Auto Expo is important," says Kenichi Ayukawa, MD and CEO, Maruti Suzuki India

"It is a very 1980s concept and needs to be reimagined. Then there was no social media or Internet, so the Expo was a good platform to showcase products. Now things have changed," says a senior official with a two-wheeler firm. "I can create an event on my own for less than a tenth of the cost and still meet targets on customer acquisition. I am not even sure if people who come to the Expo are interested in buying vehicles at all."

Further, the industry is bracing itself for a number of disruptions in the future like electric mobility, which is likely to test the financial mettle of the industry. Conserving resources is the buzzword. What makes matters worse for companies in India is the inequitable growth in the industry. In passenger vehicles, the top three companies - Maruti Suzuki, Hyundai Motor and Mahindra and Mahindra - command a near 75 per cent share of the market, leaving the last quarter for the rest of the players to fight over. That's 18 companies fighting for a 25 per cent share. Similarly, in commercial vehicles and two-wheelers the top two players account for 70 per cent and 65 per cent of the market, respectively. This top heavy structure makes it extremely difficult for fringe players to make money or newer players to find traction.

"It is a very unique situation in India where only two companies have a double-digit market share and the market leader has a 50 per cent share," says Jnaneswar Sen, Partner at Maven Partners, a consultancy firm for automobiles and component industry. "Only these two companies manage to sustain sales for a particular product over the lifetime. In most other cases, one product works at one point but others don't. This creates stress in the system which reflects in their balance sheets."

The dominance of the bigger players makes it difficult for fringe players to break in or for new entrants to gain traction. It also dims the attractiveness of the world's fourth-largest car market that is tipped to become the second-largest by the end of this decade. An example is the failure of American companies in the market exemplified by the exit of General Motors in 2017. It grabbed a lot of headlines then but did not come as a surprise. The other big American auto firm Ford also decided to exit the market last year, leaving most of its operations, including production facilities in a joint venture with Mahindra and Mahindra. Even the Europeans have not found the going easy. The Volkswagen group that has been in the mass market here for over two decades with Skoda and more than a decade with the VW brand also admitted it did have an option to exit two years back before drawing up a new plan with fresh investments. "A few years ago, our plan was weak and it was a time when we could have decided to exit the market," says Jurgen Stackmann, Head - Sales and Marketing, Volkswagen group. "We had to decide to either stay weak and play along or go bold. Our decision to invest into a new platform for India is a statement that we believe in India's future. It is a very tough and competitive market but market dynamics will always change faster in an economy like India. It is the potential at the end of the day that is attractive, which is why we decided to embark on our India 2.0 plan and stay invested."

Many of these fringe companies are also not profitable which, in turn, impairs their ability to participate in an exhibition that costs a lot of money. Even luxury carmakers that always attract more eyeballs, make more money per car but are faced with a stagnant market for almost five years now, have felt the strain. The slowdown in the market, in its 20th month now, has not helped.

"A number of manufacturers are missing this time as the industry is going through a tough time, but in other countries the problem is bigger as young people are not so much interested in buying cars. In India, the potential is still big, so an event like this is important," says Kenichi Ayukawa, Managing Director and CEO, Maruti Suzuki India.

Rajeev Chaba, President and Managing Director, MG Motor, has been a regular at the Expo and admitted it felt a bit scaled down this year. "It obviously feels a bit scaled down this time. It only makes sense for a company to be here if they have anything exciting to show or tease consumers with," he says. "We had to be here because we are new and have so much to show. Same goes for Great Wall Motor, which is making an entry into India. Everybody takes a call based on their needs."

Sen, a veteran in the industry having worked with Maruti Suzuki and Honda Cars, however, believes the higher number of no shows this year was largely due to the downturn and most will be back in the next edition.

"The bigger question is whether the aspiration to own a car is going down? The jury is still out on this one but, I believe, except for a small fraction of the market, consumers still want to own a vehicle," he says. "Yes the way in which information is consumed has changed a lot with the Internet and social media and the consumer behaviour is also evolving rapidly. Everybody from manufacturers to even show organisers have to keep pace with it."

There is one silver lining. Unlike the Frankfurt show, footfalls did not decline at the Indian expo this year. Industry would now hope, some of those would make their way to the showrooms as well.