Cracks in the Hinduja Undivided Family

Hinduja family seems headed for a split. Why a family constitution may have helped Over the past 50 years, the Hindujas have epitomised bonding, as they dined, prayed and holidayed together, even as the family expanded from the second generation to the third and fourth generations. The business empire also grew as they moved headquarters from Shikarpur in Sindh province of today's Pakistan to Tehran and then London, though most of their businesses are headquartered in India.

In fact, it was the unity of the second generation - the four sons of patriarch Parmanand Deepchand Hinduja - Srichand (84), Gopichand (80), Prakash (75) and Ashok (70)- that helped them sail through political controversies, including the one in London in which a British cabinet minister lost his job, and the Bofors scandal, which shook Indian politics in the late 80s. 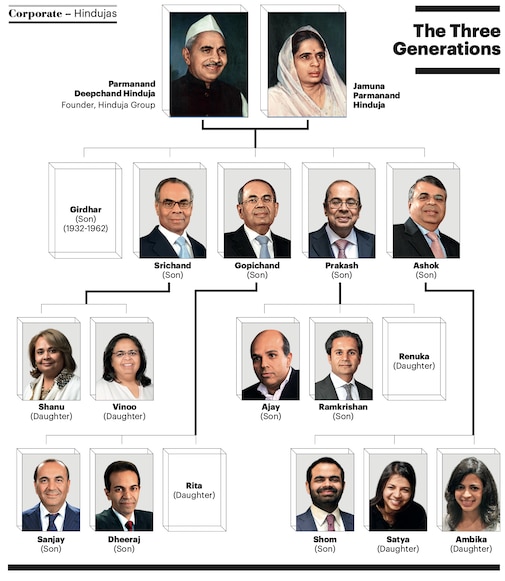 That was then. Today, the Hinduja Group is on the verge of a vertical split as the three younger brothers rally against the family of Srichand P. Hinduja, the chairman of the group who was instrumental in creating its financial institutions, including IndusInd Bank and Hinduja Bank (Switzerland). The five group companies which are listed together generated revenues of Rs 65,700 crore and profits of Rs 5,500 crore in 2018/19.

The root of the current rift lies in 2014, when the brothers signed a letter that assets held by one brother belonged to all. The three younger brothers allegedly tried to use the 2014 letter to take control of Hinduja Bank (Switzerland), which was in Srichands sole name, resulting in the legal battle. The cracks started surfacing as the third generation -the children of the four brothers - started moving up the ladder and holding vital positions in family businesses, say sources in the know. "Though the brothers were close initially, problems cropped up between daughters of Srichand and their cousins, who are on boards of group companies," says a source from another business family.

Documents submitted to the High Court in England show the family dispute had started way back in 2015. Srichand Hinduja himself sought to disavow the agreement signed with the other three brothers on July 1, 2014.

The elder Hinduja sought a meeting with his brothers in 2015 to discuss an exit route, but that did not work out. They had an unpleasant discussion during a board meeting in 2018 too. By then, the family had two camps - Srichand's daughters Shanu and Vinoo on one side and the rest of the family on the other. Prakash Hinduja, the third brother, who initially supported Srichand for nullifying the 2014 letter, also switched sides, says another source in the group.

The current legal battle is over ownership of Hinduja Bank (Switzerland), though it may not stop there.

Vinoo Hinduja moved the High Court of Justice in London, acting on behalf of her father, asking for separation. She wants her family to get control of Geneva-based Hinduja Bank (Switzerland), in which her father is chairman emeritus and elder sister Shanu is chairperson. Shanu's son Karam Hinduja was appointed CEO of the bank in mid-June; this had added fuel in the simmering feud.

In India, the Dalmias, GMR Group promoters, the Burmans of Dabur and Murugappa Group promoters have formal family constitutions. The Singhania-run JK Group has an elaborate family parliament called the JK Organisation.

The Hinduja battle is similar to that of the Bajaj family where also it was one brother versus the rest. Shishir Bajaj's family finally separated from Rahul Bajaj and cousins to chart out a new journey. The families of Rahul Bajaj and his cousins reached a family agreement to ring-fence businesses from future disputes. Management responsibilities have been given to qualified family members - Rajiv Bajaj got the responsibility of Bajaj Auto and his younger brother Sanjiv Bajaj got Bajaj Finserv - but every third generation family hold stakes in all businesses. It is time for Hindujas to consult the Bajaj's.

The three Hinduja brothers, who are defending the case, said in a statement that Srichand's health has been deteriorating for a number of years. He is suffering from Lewy Body disease, which is a form of dementia. "It is very unfortunate that these proceedings are taking place as they go against our founder's and familys values and principles," they said.

Presiding over a private hearing in the Chancery Division of the High Court, Justice Sarah Falk agreed that Srichand Hinduja's daughter, Vinoo, could act on her father's behalf as his "litigation friend" and safeguard her fathers interests due to his ill health. Sources close to Srichand's family say that though the initial claim is for the Swiss bank, the matter will grow to gain control of one- fourth of the entire assets of the Hinduja family. Both the parties did not comment on detailed questionnaires from BT.

The Hinduja Group is largely controlled by the four brothers. But operations of most businesses - Ashok Leyland, Gulf Oil, Hinduja Renewables, GOCL, Hinduja Bank (Switzerland) among others - are headed by the third generation, except IndusInd Bank, where professionals are in charge. However, the promoter holding company of the bank is controlled by youngest brother Ashok Hinduja as chairman.

Outsiders are intrigued why Srichand's family has staked their claim only for this bank. "It is likely that they are counting it as an asset outside the overall family assets of the Hindujas. They will claim their portion of other businesses as well," says a banker in Mumbai.

Srichand's daughter Shanu holds the position of Co-Chair at the UN Global Accelerator, in addition to being Chair of Hinduja Bank. Vinoo, who has filed the litigation against the uncles on behalf of her father, is director of Hinduja Ventures Ltd, Hinduja Group India Ltd and GOCL Corporation.

Hinduja Bank (Switzerland) was founded by Srichand Hinduja in Geneva in 1994. It is a small bank with assets of 343 million Swiss francs (Rs 2,744 crore) as of 2018. The bank offers personalised services to its high net worth customers. It also owns close to 5 per cent in Ashok Leyland.

Gopichand's two sons - Sanjay and Dheeraj - are heading two prominent businesses in the group. However, daughter Rita is not in business. The management control of the automotive business is under Dheeraj Hinduja. He is chairman of the second-largest manufacturer of commercial vehicles in India, Ashok Leyland. Dheeraj is also the chairman of Hinduja Tech, the engineering and digital technologies service provider for automotive manufacturing industry, and Hinduja Leyland Finance Ltd, a non-banking financial company for vehicle financing.

Sanjay Hinduja is chairman of Gulf Oil International and India-listed Gulf Oil Lubricants India Ltd. Gulf Oil has a manufacturing facility in Silvassa and over 350 distributors and 50,000 retail counters in the country. Ashok Hinduja's son Shom is director in the Indian business. It is one of the largest independent downstream lubricant companies in the world with sales in over 100 countries. It owns blending plants in Argentina, China, India, the Philippines and the United Arab Emirates. Gulf Oil Lubricants India posted a profit of Rs 203 crore on a revenue of Rs 1,644 crore in FY20. Another Hinduja group company, GOCL, acquired US-based specialty chemicals maker Houghton International Inc. for $1.05 billion in 2012.

Prakash Hinduja has two sons, Ajay and Ramkrishan, and a daughter, Renuka. Ajay is Chairman of GOCL Corp. The second son, Ramkrishan, was vice chairman until March 2019. GOCL operates in real estate, land development, infrastructure contracts, commercial explosives (through DL Explosives Ltd), detonators, mining, chemicals and accessories. The company's realty division is building a 40-acre IT township, 'Ecopolis', in Bengaluru in association with Hinduja Realty Ventures, which is headed by Ashok Hinduja. Ajay is also on board of IndusInd International Holdings Ltd, the promoter of IndusInd Bank.

Ramkrishan Hinduja was Chairman of Hinduja Global Solutions until last year, while Shanu was co-chairperson and Vinoo a director on the eight-member board. But the cousins left the board in September 2019 after a bitter battle. Sources said differences among family members were impacting the functioning of the business. The tension within the family was building up for over a year.

Ashok Hinduja has two daughters, Ambika and Satya, and one son, Shom. Shom joined Hinduja group in 2014 after working with KPMG. He is now Chairman of Hinduja Renewable Energy Private Ltd and a director on Hinduja National Power Corporation Ltd and Gulf Oil Lubricants India Ltd boards. Ambika Hinduja is a former Bollywood film producer who produced movies Teen Patti and Being Cyrus. She is married to producer Raman Macker. The second daughter, Satya, is a DJ and music producer.

Each brother has been assigned separate business responsibilities. Besides Hinduja Bank, Srichand also holds chairmanship of the entire group and the CSR arm, Hinduja Foundation. He conceived the idea of IndusInd Bank and executed it with contributions from the NRI community.

Gopichand is co-chairman of the Hinduja group, but he is in charge of operations of Hinduja Automotive Ltd, UK, as chairman. The two eldest brothers, Srichand and Gopichand, are based out of London. Gopichand led the transformation of the group from a Indo-Middle East trading operation into a multi-billion dollar transnational conglomerate. He also spearheaded acquisitions of Gulf Oil and Ashok Leyland in the 1980s.

The third brother, Prakash, heads Hinduja Group (Europe), as chairman. He joined the family business in Tehran and later moved to Geneva and took charge of the groups European operations. In 2008, he moved to Monaco.

Youngest brother Ashok Hinduja, Chairman of Hinduja Group of Companies (India), is based out of Mumbai. From an operational point of view, he has a bigger role among the brothers. Ashok joined the familys expanding business at a young age, looking after affairs in India. He serves as Chairman of IIHL (Mauritius), the parent promoting company of IndusInd Bank. He is also Chairman of Nxt Digital Ltd, the media and entertainment vertical, and Hinduja National Power Corporation Ltd, the company that runs a 1,040 MW thermal power plant. He is also Chairman Emeritus of BPO firm Hinduja Global Solutions,.

The Hinduja brothers had in 2014 signed on a document saying the assets held by one brother belong to all and that each of them will appoint others as their executors. But now, family patriarch Srichand Hinduja and his daughter Vinoo want the letter to be declared of "no legal effect" and the familys assets be separated as per his wish.

Based on this, it appears that one of the key questions here for the court is whether the 2014 document, at the centre of the dispute, is an informal agreement, a will or a family arrangement, says Ramesh Vaidyanathan, Founder and Managing Partner of Mumbai-based law firm Advaya Legal. "If such an arrangement is entered into bona fide and terms are fair in the circumstances, the courts will readily give consent to such an arrangement than to avoid it. A family arrangement will bind all the parties to the arrangement and will preclude the brothers from revoking or challenging the same if they have taken advantage under the agreement," he adds.

"As far as the Hinduja brothers are concerned, their conduct in public and the manner in which their shareholding is held in their Indian businesses (no direct ownership, all holdings through multiple promoter companies) suggest that they are in it together. It was never really known to the general public how much each brother held in these companies," says Vaidyanathan.

Given the Hinduja brothers' high profile, their large circle of influential friends can potentially act as mediators. So, experts refuse to ignore the possibility of an out-of-court settlement. "If the family wants to retain the $13 billion fortune as joint property, they should introduce a family constitution to avoid disputes. Like in the Bajaj group, the separation of management control and cross-ownership of promoter families can be possible only through family settlement agreement," says an executive. Perhaps, the brothers may wish to go along on similar lines.

The Return of Micromax