Corporate India's fragile credit health is fast becoming a cause for concern. 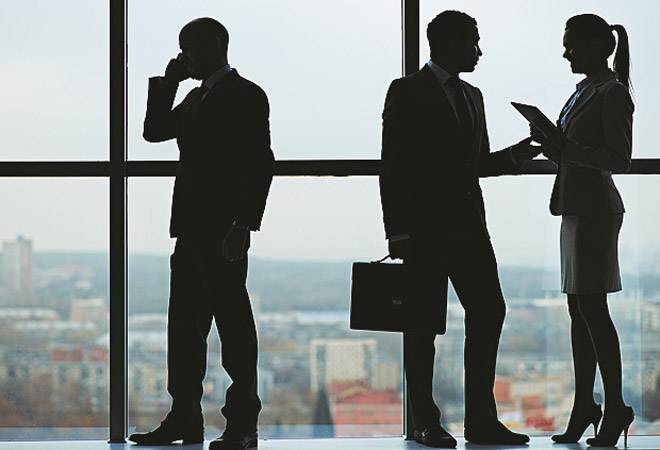 Vidya Bala, Head - Mutual Fund Research at Fundsindia.com, is advising investors not to invest in short-term debt funds that are chasing returns by taking higher credit risks than warranted. Mutual fund investors have been unable to handle the credit risk when faced with a fall in net asset values (NAVs) because of downgrade of and default on debt instruments, as seen in the instances of Amtek Auto, JSPL and BILT. It's been difficult to convince investors to stay away from the chart toppers as funds taking higher risk are giving 70-150 basis points (bps) higher return than those with a low-risk strategy. But when the tide turns, investors risk losing even their principal.

Until now, the banking system faced the brunt of default from India Inc., but that is changing fast. Crisil Rat- ings indicates that India Inc.'s overall credit health in 2016/17 continues to remain fragile, and India Ratings expects 50 per cent (Rs15 lakh crore) of the total corporate debt, including non-bank debt to remain vulnerable (default on its debt repayment). It's a consequence of weak asset quality and stressed cash flow. There are concerns that any untoward incident, from currency depreciation to global and domestic event risk, could create a huge dent in the portfolio of investors who have been making record investments in corporate debt. After all, non-bank debt stands approximately at 25 per cent of the total corporate debt of Rs30 lakh crore. 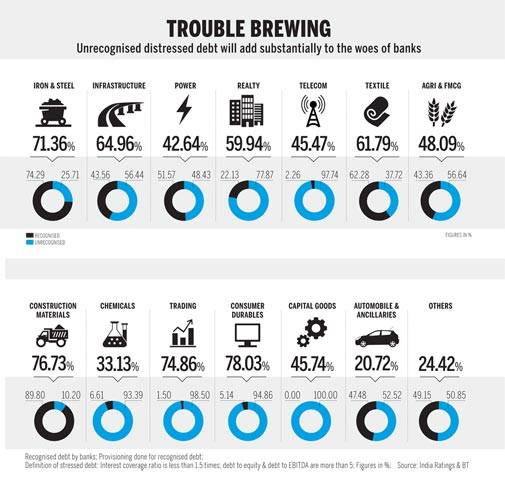 "We are asking investors to avoid funds that are chasing returns by taking higher credit risk. We ask investors with less than two years of investment horizon to stick to funds with lower average maturity and lower credit risk. We advise investors to stick to funds that are buying quality papers, which are triple A-rated in ultra short-term category and AA plus in the short-term category," says Bala. Meanwhile, Securities and Exchange Board of India Chairman Ajay Tyagi has warned mutual funds from adding bad debt to their portfolio. Besides following the ratings of credit agencies, they should do their homework as well before investing in debt instruments, Tyagi said on June 29, 2017, at amfi's first ever mutual fund summit in Mumbai.

But with interest rates falling, generating returns have become difficult for fund managers. To generate high yields, they tend to look at high-risk debt papers. According to Fundsindia.com, in the short-term bond fund category, papers below AA plus ratings are finding more weightage in portfolios. On an average, holding below AA plus rating in a short-term debt fund's portfolio is 16 per cent compared to 10-12 per cent two years ago. In some of the funds, investment in paper with below AA plus rating is as high as 80 per cent. Similarly, in the ultra short-term fund category, two years ago there were no holdings with A rating, but it now constitutes 3-4 per cent of the portfolio. Then, on an average, papers below AAA rating have gone up to 25 per cent now, compared to around 20 per cent two years ago, in the ultra short-term fund category. This clearly indicates that fund managers are chasing returns at the cost of safety. "We have told investors to stick at the shorter end of the curve and not to time the market. Second, we have been investing with the large fund houses as even in case of default investors interest is safeguarded," says Hemant Rustagi, CEO, Wiseinvest Advisors. He is hinting at the JSPL fiasco where Franklin Templeton took the hit on its own balance sheet taking care of investors. Similarly, ICICI Prudential managed to throw its weight and get the interest payment from the company. 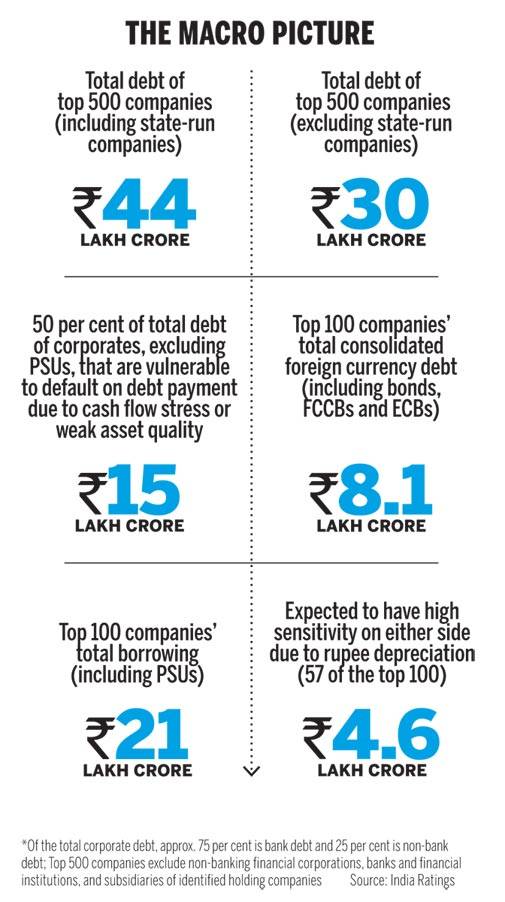 While Rahul Bhuskute, Head of Structured Investment & Credit at ICICI Prudential AMC, agrees that mutual funds have been taking credit risk with an aim to generate better returns, he feels there isn't much risk to the overall portfolio if one diversifies and makes small investments. "Taking small exposure in a diversified portfolio may not have an impact on the portfolio even in an adverse event. In the last three years, while there hasn't been a single default in triple A-rated paper, the probability of default in three year double A is at 0.77 per cent as per CRISIL data, which is negligible when considering to the return one makes from investing in double A-rated paper as compared to triple A," says Bhuskute. "Second, the amount of default is minuscule to the overall investment in the bond market." 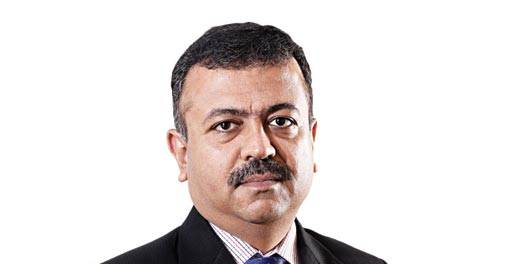 Rakesh Valecha, Senior Director and Head - Core Analytical Group, at India Ratings, isn't worried about the rising investment in NCDs and debt paper of Indian corporates. "Over 95 per cent of mutual fund investments in bonds and NCDs are typically in entities which are categorised as high ease of refinancing (HER) and medium ease of refinancing (MER), a small proportion being in the elevated risk of refinancing (ERR) category," he says.

According to India Ratings, the liabilities of the top 100 indebted companies, including state-run, stands at Rs21 lakh crore. Of this, Rs8.1 lakh crore is the foreign currency debt. It is estimated that 57 of these 100 companies account for Rs4.6 lakh crore of it and is highly sensitive to rupee depreciation. In fact, 64 per cent of the foreign currency is unhedged, making it more vulnerable to rupee movement with oil and gas, metal and mining, power and telecom sectors, accounting for 75 per cent of the gross foreign exchange exposure. "A 5 to 10 per cent depreciation in rupee could have a severe impact on the credit profile of these companies," says Valecha.

Now, given the confidence of foreign investors in India, non-bank debt has become a key market for corporates. Indian companies have been able to raise money at lower cost than bank debt through corporate bonds, domestically as well as overseas. Bank debt still amounts to three-fourths of the total debt of India Inc. "While it is reasonable to expect that stress in the system is by and large known, though all of it may not be recognised by banks, some additional surprises could erupt due to risk aversion by banks and the slow pace of deleveraging," says Valecha. "In the next 12 to 18 months, I expect the additional slippages to net performing asset (NPA) in the banking sector to be 3.2 per cent of the total bank credit, or Rs2.62 lakh crore of the Rs17.5 lakh crore stressed corporate exposure of the banking sector."

According to Valecha, sectors like infrastructure - particularly toll roads, thermal power and real estate - have a negative outlook and could potentially add to the challenges of the banking and financial system. These three sectors account for 38 per cent of the sectoral exposure of the Indian banking system with an absolute debt of close to Rs7 lakh crore. Over 50 per cent of the debt in these sectors is considered as unrecognised stressed debt. Meanwhile, in sectors like chemicals, trading, consumer durables and capital goods sectors, banks have not accounted for contingency where unrecognised debt in some of them is at 100 per cent. Barring automobile companies, over 65 per cent of the debt is in stress across iron & steel, infrastructure, consumer durables and construction material companies. In iron & steel, the stressed bank debt is at 71.4 per cent. Similarly, in infrastructure (65 per cent), real estate (60 per cent), construction material (77 per cent), consumer durables (78 per cent), textiles (62 per cent), agri & FMCG (48 per cent), capital goods (46 per cent) and telecom (46 per cent), the stress is higher.

"The pain of India Inc. doesn't seem to be ending anytime soon. In fact, the rolling snowball is becoming a bigger animal which can take down with it many companies and banks. In the past two years, the provisioning coverage ratio (PCR) of banks has gone up from 23 per cent to 37 per cent," says Pramod Gubbi, Managing Director & Head of Institutional Equities, Ambit Capital. With private sector investment demand unlikely to pick up and the pace of deleveraging remaining slow, stressed entities are likely to persist with a trajectory of even lower EBITDA growth in 2017/18. In such a scenario, the financial health of these entities will continue to remain fragile.

In hindsight, it can be said that India Inc.'s capacity expansion exercise was wrongly timed. But today with no credit offtake (For February 2017, the non-food credit offtake was at 3.3 per cent), the money earned as well as raised is used to service debt. In most of the cases, the money raised or borrowed is to refinance the existing debt. This has sent the private placement (debt) at an all-time high with close to Rs6.88 lakh crore being raised from the market in 2017/18, nearly three times the amount raised in the last five years. In 2011/12, the amount raised through private placement was at Rs2.51 lakh crore.

While the government has been intervening to help different sectors, including steel, power and infrastructure, experts feel it isn't going to help India Inc. in short-term. Companies in these sectors are still EBITDA-negative, which means that they aren't even generating free cash flows to service debt, they point out. In sectors like sugar and metal & mining, the leverage is at 11 times. While in sectors like infrastructure, real estate and power, the leverage of companies is between 7.5-9 times. "Government intervention in key sectors has helped companies to at least service their working capital loan which have kept the banking system alive, but India Inc. is nowhere close to shedding flab (debt). In short, India Inc. is still on ventilator, and it needs heavy dose of antibiotics or surgery to come out of its sickness," says Gurunath Mudlapur, Managing Director, Atherstone Capital Market, a Mumbai-based investment bank. 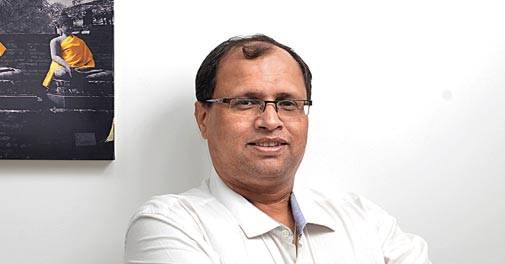 Banks will have to adhere to the Reserve Bank of India diktat. But bankers feel resolution is better than litigation and this is the prime reason why banks aren't willing to take a huge haircut on the assets. "It's not easy as one will also have to see how the banks provide for these loans if they are considered as NPAs. It has also to be seen if banks can afford to take a huge hole on their P&L," says a senior fund manager on condition of anonymity. "It's not just the loan amount, banks will also have to forego interest accumulated over the years. After all, these are loans which have been taken when the rate of interest was around 9-10 per cent and today the money, including principal and interest, must have got doubled."

Sale of assets is an option. However, lower inflation is adding to the woes of India Inc. as asset prices have plummeted. Until inflation rises, prices aren't going up, which means debtors can't get the most from sale of assets. Adds Mudlapur: "The overall problem is fairly challenging and may not have easy solutions. However, any solution for it to be lasting would necessitate structural changes which not only address the current challenges but also lays a foundation to avoid reoccurrence in the future." In short, near-term troubles of India Inc. aren't ending anytime soon and banks and investors would feel the heat.