With the government spending liberally on overcoming the water crisis, companies offering water solutions are thriving. 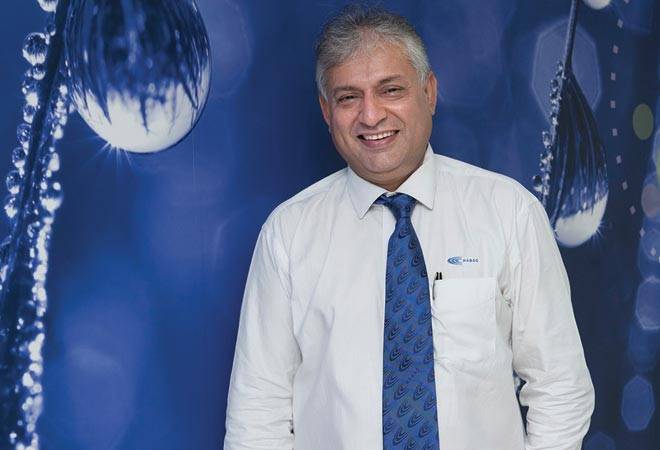 Among the biggest players in the water business in India, Larsen & Toubro (L&T) has laid water pipes across 40,000 km and built water treatment and wastewater treatment plants of a total capacity of 3,400 million litres a day (MLD). Executive Chairman A.M. Naik is convinced the vertical will get even bigger. "We're thinking of making the water business an independent company," he says. "It's currently a $1.5-billion business and in the near will easily touch $2.5 billion." Winning more water management tenders, tying up with technology partners to build desalination plants and bigger wastewater treatment plants, recycling water and canal modernisation projects are among L&T's immediate plans.

L&T is not the only one. Betting big on India's water story are French major Suez Environment, local heavyweights such as Thermax, IVRCL, VA Tech Wabag and Ion Exchange, all of whom are seeing their order books swelling. VA Tech Wabag, for instance, trebled its revenue in the past five years. Earth Water Group estimates the current size of the water treatment market in India at Rs 17,907 crore. "It is a very attractive and significant market, growing at 17-18 per cent," says Hariharan Subramaniam, Chief Operating Officer, Earth Water Group.

ALSO READ: Safety in a Bottle

Water treatment can be divided into four broad segments: municipal water supply, municipal wastewater treatment, industrial water and wastewater treatment, and seawater desalination. (See Flow of Funds.) Of these, the first two are the fastest growing. There are around 20 major players in the fray, along with nearly 700 smaller companies. "Many contracting firms are entering the market as they see more opportunity, particularly in the municipal sector," says Nutan Zarapkar, Director, Climate Change and Sustainability Services Advisory, EY India.

Opportunities are multiplying because both the Centre and state governments have realised the urgency and magnitude of the water problem. A big driving force is the millennium development goal of sanitation and water access for all. Programmes such as the Jawaharlal Nehru National Urban Renewal Mission (JNNURM), the Urban Infrastructure Development Scheme for Small and Medium Towns (UIDSSMT), the Atal Mission for Rejuvenation and Urban Transformation (AMRUT) and Smart City Mission all include water solutions as an important component. Separately, there are plans to clean up rivers, such as the Namami Gange and the Yamuna Action Plan. 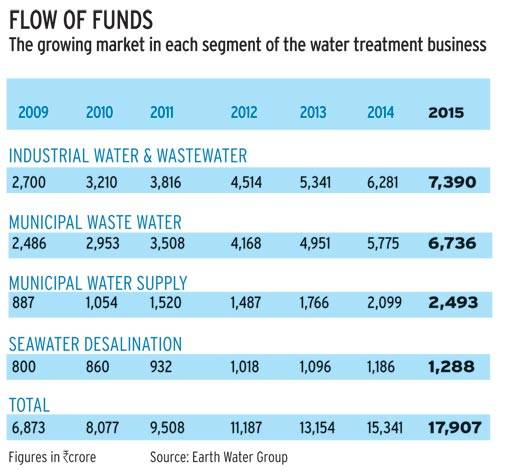 "The high potential in advanced water management and wastewater management has attracted both foreign and domestic players," says Ranen Banerjee, Partner, Government Reforms and Infrastructure Development, PwC. "The government has announced large-scale plans. This is expected to attract investment across the value chain." Subramaniam of Earth Water Group expects an investment of Rs 10,150 crore in water supply and another Rs 28,098 crore in wastewater treatment over the next six years. "India has confirmed its determination to treat wastewater, and protect its rivers and groundwater," says Shyam J. Bhan, CEO, Suez India, Suez Environment's Indian arm.

Suez is one of the biggest beneficiaries. In January this year, it won six government contracts for a total of e67 million (Rs 502 crore) - three of them with the Bangalore Water and Sewerage Board (BWSB) and another three with Rajasthan's Public Health Engineering (PHE) department. Two of the Bangalore ones relate to the TK Halli drinking water plant, 90 km from Bangalore, and the third to the Kengeri wastewater treatment plant. "At TK Halli, we have to build a 300-MLD drinking water plant and rehabilitate another one of similar size," says Bhan. "We have to complete the project in 30 months and maintain the units for seven years, which will bring in total revenues of e20 million." In Rajasthan, Suez is building drinking water units in Bikaner, Hanumangarh and Sriganganagar.

But it is not only the government that is promoting the water business. With environmental norms becoming stringent, many private companies are also investing heavily in water treatment. The Central Ground Water Authority (CGWA) has mandated that in water stressed areas, all those extracting groundwater need to first get a no-objection certificate (NOC) and that, as far as possible, industries in these areas should try to treat and reuse wastewater. Some pollution control boards have suggested that specified industries should achieve zero liquid discharge (ZLD) status - not release any wastewater at all. Haryana, for instance, has mandated it for its textile mills.

Indian industry consumes around 40 billion cubic meters (BCM) of water a year and discharges wastewater of about 30.7 BCM. "Many industries are realising that the wastewater they generate could well be their cheapest and most reliable source of water," says Subramaniam. "Activities such as maintaining gardens, landscaping, washing and especially running cooling towers need huge volumes of water, but this does not necessarily have to be of high purity. Recycled wastewater can serve the purpose very well."

Some companies have been recycling water on a large scale for years - Rashtriya Chemicals and Fertilizers in Mumbai, Maruti Udyog in Gurgaon or Ford Motors in Chennai, for instance - but many more are now following suit. The trend is a big boon for water treatment specialists. Thermax, for example, sells around 1,000 water treatment plants a year, at prices ranging from Rs 2 lakh to Rs 2-3 crore. Apart from industry, hotels, malls and even housing societies are setting up water treatment plants, further adding to the Rs 7,390-crore market.

Increased awareness has also led to the adoption of new technologies. Effluent discharge by the textile mills of Tiruppur, Tamil Nadu, for example, used to be considerable. In 2015, however, the mill owners partnered with Dow Water & Process Solutions (DWPS). "As a result, our application development team created a product we called Fortilife, which enables minimum liquid discharge (MLD) from textile plants," says Sudhir Shenoy of Dow India. "The pilot project achieved a quick turnaround and now the product is being rapidly adopted by the industry." Shenoy maintains MLD is a better option than ZLD. "ZLD completely purifies wastewater, but is not a realistic solution for all industries because of its steep cost," he says. "MLD, achieved by the process DWPS has formulated, is more cost effective and sustainable."

"Water is grossly underpriced in India. The ability of municipalities and governments to pay for water treatment thus remains a question mark"

Also gaining traction is the seawater desalination vertical, which to most experts is still an unpredictable sector, depending on a handful of large projects. As per the Earth Water Group, the current market is sized at Rs 1,288 crore. For urban areas close to the coast, desalination plants are also an option to provide clean water, but such water does not come cheap. Two desalination plants of 100 MLD have been set up in Chennai by IVRCL and VA Tech Wabag in 2010 and 2013, respectively. "Desalinated water costs around Rs 35-45 per litre cube," says Rajneesh Chopra, Global Head of Business Development, Wabag. The company earned revenues of Rs 2,435 crore in 2015. "It is not cheap, but is better than having no water at all." Chennai faced an acute water shortage in the 1980s and 1990s, but has overcome it with an array of solutions that included strict curbs on water use by industries as well as the two desalination plants. Setting up two more such plants, of 200 and 400 MLD, is being discussed.

The picture, however, is not entirely rosy for the water companies. The biggest challenge is the low cost of water in India. "Water is grossly underpriced and, thus, the capacity of municipalities to pay for water treatment remains a question mark," says Chopra of Wabag. It also prompts them to opt for the cheapest technology. "Projects tend to be awarded purely to the lowest financial bidder after common screening for technical proposals," says Shivanshu Chauhan, Director, Government Reforms and Infrastructure Development, PwC. "Better technical solutions cut little ice." Add to that the traditional slowness of government decision making. "The Chennai desalination projects took 20 years from conception to becoming a reality," says Subramaniam. "There is still no consensus on their cost viability."

Indeed, lately, the tardiness in awarding contracts has become more pronounced. "Funds from schemes like the JNNURM and the National Rural Health Mission are no longer available to the local administration as freely as before," says M. S. Unnikrishnan, CEO and Managing Director, Thermax. Policy ambiguities over PPPs persist, delaying their signing. This has led to a number of multinational water companies - such as Cadagua, Tritech, Manila Water, Kobelco Water - having problems scaling and in some cases even trimming their Indian operations.

But there are also the optimists. In contrast to the quitters, Suez has deepened its footprint in India by acquiring a majority stake in local water company Driplex Water Engineering Ltd, in January this year. "Water in India is a good business to be in," says Chopra.

How firms are cashing in on drip irrigation