Vishal Mehta has had limited success as an online retailer with Infibeam.com. But he is back in the hunt with e-commerce infrastructure provider BuildaBazaar.com.
Arpita Mukherjee, Anand Adhikari,and We have to have the visibility of returns in a capital intensive business... It is not what you raise (that matters), but what you return: Vishal Mehta, founder & CEO, Infibeam Incorporation (Photo: Shailesh Raval)

Circa 2007. Vishal Mehta, a former employee of Amazon, set out to launch his own venture. Mehta was keen to create online stores on the cloud for brick-and-mortar-retailers. "We decided to first build a platform for a large retailer because we didn't have much idea about India and the challenges. And if we could do it for one big client, then we can do it for all other smaller and mid-sized retailers," he says.

Mehta had few takers for his business proposition. He had little to show for his efforts when he returned to Ahmedabad after a series of meetings with big retailers in Mumbai. "It was a long flight back home. It seemed like forever," he says. Mehta then decided to turn his business upside down. "Let's use the platform ourselves. Let's understand the problem ourselves. Let's become a retailer first," said Mehta to his business partners, most of them former employees of Amazon. That's how the online retailing arm Infibeam.com was born.

Infibeam was launched at a time when online retailing was in its infancy in India. It initially focused on the automobile segment. In November 2008, Infibeam acquired the photo printing portal Picsquare to enter the gifting space. The product basket was gradually expanded to include everything from mobiles to footwear. Infibeam made an impact to begin with, and there were rumours initially that Amazon was planning to acquire it to enter India. 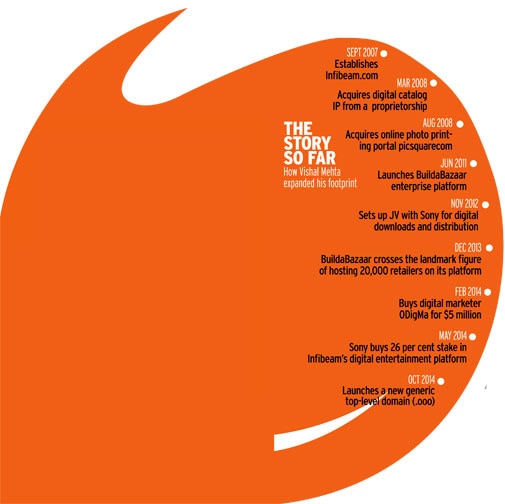 Infibeam: The story so far
Today, it seems that Infibeam.com has lost its way. A part of the reason is its aversion to raising external funds. At a time when Flipkart, Amazon and Snapdeal - who have raised big money from private equity players -are slugging it out in the thriving e-commerce market, Infibeam is nowhere in the picture. There are some who say that the retailer has failed to develop a distinct brand identity unlike its rivals. For instance, Flipkart and Snapdeal are known for deep discounts and diversity of products. Amazon has also focused on good service besides offering hefty discounts. Fashion is the USP of Jabong and Myntra. "Infibeam is an online marketplace which could never build itself into a shopping destination. It offers discounts but why would someone go there instead of Snapdeal or Amazon who also offer heavy discounts. If an e-tailer doesn't have a proposition for consumers, it is very difficult to sustain the onslaught of large players," says an industry expert.

Those who have worked with Mehta say that he has mostly been averse to external funding and hefty marketing spends. Most investors who approached Mehta sought a high stake in the start-up, so he decided to run the show on his own. "They had the first-mover advantage but they compromised on growth due to this approach," says an online retailer. Mehta's explanation is that private equity money comes with costs and riders.

There was a time when Flipkart and Infibeam were almost head to head, according to Niren Shah, Managing Director at Norwest Venture Partners, a venture capital company. "In the past Infibeam was very focused on capital efficiency, and so it did not raise large sums of money. Unfortunately, the Indian market has chosen winners based on scale and the lack of fund raising may have impeded Infibeam's progress."

Clearly, Infibeam lags behind retailers like Flipkart and Snapdeal in terms of volumes and advertising spends. When other e-tailers invested heavily in offline and online marketing, Infibeam chose to stay low-profile. In 2013, it came out with its first TV advertising campaign but since the return on investment was low, it did not continue.

BACK TO SQUARE ONE

Infibeam's web of businesses
After trying his luck in e-commerce for a few years with limited success, Mehta decided to go back to his original idea of building e-commerce platforms for other retailers. Infibeam Incorporation launched BuildaBaazar.com in June 2011. Mehta asserts that the venture is at the core of his business activities. "That's where the whole opportunity lies," he says.

BuildaBazaar helps merchants build a platform to sell their products online . In contrast, other e-commerce players such as Flipkart only let retailers list and sell their products on their platform. Indeed, BuildaBazaar is an end-to-end infrastructure provider with an IT backbone, marketing support, payment gateway and logistics support. Its direct competitors are Zepo and KartRocket. Indian retailers, especially SMEs, need continuous support and handholding in setting up shops online.

BuildaBazaar has a tie-up with payment gateways of HDFC Bank, Axis Bank and Paypal. It also has tie-ups with three dozen third-party logistics players to deliver products. Today, BuildaBazaar hosts more than 30,000 retailers including Crossword and The Mobile Store, home appliances maker Prestige, leather goods maker Hidesign and mobile companies such as MTS India and Airtel.

BuildaBazaar earns one per cent of the sales on its platform. It is perhaps the largest infrastructure provider for SMEs in the country. "We want to have 10-20 lakh merchants in next 12-18 months globally," says Mehta. In September 2013, his company forayed into West Asia, which will add significantly to the group's revenues.

Abhay Deshpande, CEO of Martjack, is a bit sceptical of BuildaBazaar. "If you just create a store and provide technology, it is not going to solve the problem of merchants. How will he get the transactions for SMEs? If a retailer is not successful, neither the platform nor the service providers will be successful." Martjack provides enterprise platform for retailers who want to build an online presence and have an offline turnover of over Rs 500 crore.

Martjack believes that small retailers cannot compete with Flipkarts and Snapdeals of the world when it comes to discounts and product catalogue. Small retailers, Deshpande feels, can set up their shops online but they can only do well if they are dealing in niche products, have a strong brand name or a robust online budget. It is not going to be smooth sailing, then, for Mehta going forward.

In high-growth industries, entrepreneurs generally chase growth, with profits coming later as they build a critical mass. E-commerce companies follow the same principle. But Mehta has a different business philosophy. "We have to have the visibility of returns in a capital intensive business. If you burn a few thousand crores, it is very difficult to get it back. It is not what you raise (that matters), but what you return," says Mehta, adding that sticking to a business plan requires a lot of discipline.

In the current fiscal year 2014/15, the consolidated revenues of different businesses of Infibeam Incorporation are expected to be between Rs 400 crore and Rs 500 crore with earnings before interest, taxes, depreciation and amortization in the range of Rs 30-50 crore, according to Mehta. The company had broken even in 2013/14.

Mehta believes in profitable growth than just building sales volumes. He equates his business philosophy with that of companies like IndiGo and HDFC, which focus on growth with profitability. "Retail is very competitive. The shareholders would like to have returns at some stage and then it would be difficult to service them," he says.

Meanwhile, Mehta is ready to take the plunge and raise money from the Indian equity markets. An initial public offering (IPO) is planned in 2015. This will make Infibeam Incorporation the first e-commerce company to get listed on Indian bourses. The plan is to expand the equity capital. The IPO will target raising Rs 1,000 crore - it will be used to expand in international markets, build infrastructure and platforms, and manage supply chain logistics.

How Infibeam fares in comparison to other e-commerce players
Mehta refuses to be drawn into a debate on the surging valuations of Flipkart and other retailers. After the latest round of funding, Flipkart's valuation has reached $11 billion. "I think the valuations are justified," says Mehta, but adds a caveat that retailers have to generate profits. "Businesses are not built to lose money but to make money," grins Mehta.

An Infibeam IPO could pave the way for a public listing by other Indian e-commerce companies, particularly those who are now on the revival path, says Ashutosh Maheshvari, MD and CEO, Motilal Oswal Investment Advisors. "Infibeam is a good candidate because it has already gone through the curve," he says.

Maheshvari sees local search provider Justdial as a proxy for valuation. Justdial IPO was priced at Rs 590 per share. It is now trading around Rs 1,350 per share. "Justdial is digital classifieds. Vishal has gone one step further with the subscriber-based model, which keeps the cash coming," says Maheshvari. "There is a uniqueness factor and their competition is limited, so Infibeam has reasons to go public."

Crisil Research states that when investing in an IPO, investors should assess elements such as business model, management capability and sustainability of that model, among other things. "In case the company is not making profits currently, visibility of future profits should be assessed," the ratings firm states.

Mehta, with a 1,000-odd workforce, is focused on building a sustainable, long-term company. He has made it a point that every new hire has to work in Ahmedabad, Infibeam's headquarters, for at least six months. "The idea is that they should understand the vision of the company, culture and ethos," says Mehta.

Will Mehta's shift in focus from pure play e-commerce to a services-driven model pay rich dividends? It's early days yet but with an IPO in the works, the performance of his businesses will be closely followed by investors and analysts alike.