Move over e-commerce, it is now s-commerce's turn in the sun.
By Venkatesha Babu | Print Edition: April 10, 2016 When Kiran Kumar, 37, a testing engineer with a leading software company in Bangalore, recently bought his own apartment, he was delighted, but also worried. "The flat needed plenty of work before my family and I could start living comfortably there," he says. "We had to get some electrical tweaking done to connect the back-up power supply. We wanted additional wood work. We wanted a wash basin in a corner of the dining room. My daughter wanted a different colour on the walls of her room."

Two years ago, getting all this done would have required Kumar to hunt down an electrician, a carpenter, a plumber and a painter separately, negotiate rates with each of them and closely supervise each one's work. He would have had to search for them through his network of family and friends, or else by poring over directories, whether online or offline. "I did neither," he says. "Instead, I downloaded an app called UrbanClap and got all the services together."

First, UrbanClap had displayed prices clearly - and that, too, was an experience very different from what he had feared. "The prices were transparent, both for material and labour," he says. "And there was no haggling, which I hate." Thereafter, the handymen - whose backgrounds UrbanClap had thoroughly checked in advance - turned up punctually every morning and completed the work to Kumar's satisfaction.

E-commerce, or goods being sold online and through apps, is a multibillion dollar industry in India, but s-commerce, or services being provided online through apps, is only now gaining traction. This, too, has gone through various stages - from individual handymen pitching their availability on websites to the rise of the likes of Justdial, Askme, Sulekha, Getit and Asklaila, which are essentially directories of local and home service (LHS) providers with telephone numbers and other contact details listed. The latest wave, however, consists of names such as UrbanClap, LocalOye, Housejoy, Taskbulls, FixMasters, Qyk, Frilip, Yelo, EasyFix, DoorMint, Zimmber, Taskbob, Reachu and Jack On Block, each with its own app, which take full ownership of the tasks to be carried out, leaving the house owner only to pay the bill. 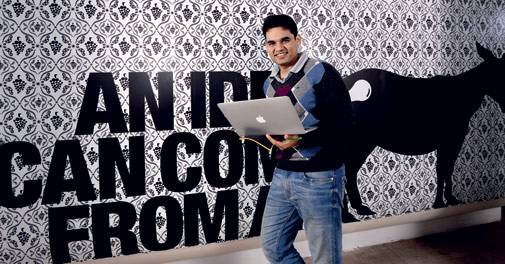 "Early on, we decided to not be a mere matchmaking platform, but take end-toend responsibility for delivering services"

"The Justdials and Sulekhas are essentially directories based on the old Yellow Pages model," says Abhiraj Bahal, who, along with IIT-Kanpur batchmate Varun Khaitan, founded UrbanClap in October 2014. "Early on, we decided we were not going to be a mere matchmaking platform, but would take end-to-end responsibility for delivering services," Bahal says. UrbanClap whets the skills and verifies security of the people it enlists to perform the 80 services it offers - from mundane plumbing and carpentry to niche services such as yoga training, wedding photography and bridal make-up. "We have weeded out around 1,500 service professionals because they did not meet our service standards," he adds. The company also sets terms and accepts payments on behalf of its service providers, taking a commission from the fee paid by the customer.

There are already over 180 start-ups in this segment, 70 per cent of them having begun in the past two years, according to Tracxn, a research platform for private investors. The market being so nascent, there are yet no estimates of its current size, but the potential, says Bahal, is around $100 billion. While most have contractual arrangements with service providers, a few such as Jack On Block, keep them as full-time employees. 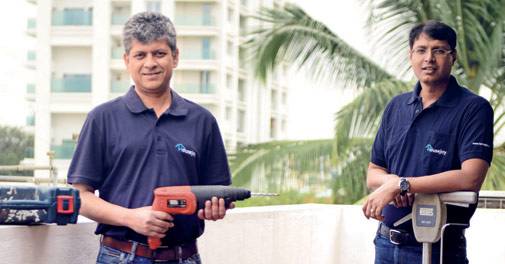 "There is intense competition for screen space. Any vendor who provides all services beneath one roof will succeed"

As in e-commerce, the players are essentially of two kinds - the generalists and the specialists. Just as Flipkart and Snapdeal are platforms selling everything under the sun, s-commerce leaders UrbanClap, Housejoy and LocalOye offer a vast horizontal spread of services. (Housejoy provides a record 140 of them, including chauffeurs, house painters and pest control.) Just like Myntra, which focuses on fashion only, or Lenskart, which specialises in spectacles, the s-commerce segment has apps such as Wassup offering laundry services alone and FlatPebble focusing only on wedding photography. There are even apps for dog trainers, marriage counsellors and birthday party planners.

The generalists believe the specialists are unlikely to live long. "Consumers won't want different apps for an interior decorator, a photographer and a house painter," says Arjun Kumar, Founder of Housejoy, which he launched in 2014 along with Sunil Goel. "There is intense competition for screen space, and we believe any vendor who provides all services beneath one roof will succeed." Both Kumar and Goel spent years in the IT industry before their latest venture - Kumar with ValueLabs and Bookadda, Goel with Tesco and TutorVista. Some generalists like UrbanClap are keen to extend their range of services even further, through acquisitions, if necessary.

But there are some essential qualities both kinds know they need to succeed. "Assured quality of service, affordability and convenience, as well as the capacity to inspire trust are key factors, whether an LHS is offering standard services or non-standard ones," says Aditya Rao, a BITS Pilani graduate and Founder-CEO of LocalOye. The company, begun in 2013, offers 120 categories of services.

UrbanClap offers services across seven cities (See Flood of Funding), and claims to get 5,000 requests daily. "Our average ticket size is Rs 7,000," says Bahal. "We've had 500,000 downloads of our app. We have links with 20,000 service professionals." LocalOye is present in three cities and Housejoy in nine, getting 4,000 and 2,500 assignments, respectively, each day. "We are connected to around 4,200 service providers," says Rao of LocalOye. "Ticket sizes vary from as little as Rs 500 to a few lakh for specialised tasks such as high-quality wedding photography. Our repeat customers are more than 60 per cent." Sharath Vatsa, CEO and founder of Jack On Block, one of the earliest players in the segment that has preferred to confine itself only to Bangalore, claims it has served 22,000 customers so far, including Café Coffee Day.

Survival of the Fittest

Private equity funding has been pouring into the LHS segment. UrbanClap recently raised Series B funding of $25 million from Bessemer Ventures, in addition to the $11.5 million it had raised from investors Accel Partners and SAIF Partners earlier. Housejoy has raised Rs 175 crore ($27 million) from Amazon India and Matrix Partners. LocalOye is backed by Tiger Global Management and Lightspeed Ventures with funding of $5 million. Jack On Block obtained Rs 1 crore from Unitus Seed Fund.

Some of the erstwhile online directories like Justdial and Sulekha, too, have aggressively embraced the app wave. Sulekha, since 2000, has pivoted to an app-heavy model to provide LHS. In April 2014, it raised Rs 175 crore from Singapore's sovereign wealth fund GIC and Norwest Venture Partners. Satya Prabhakar, CEO of Sulekha, says: "We have been in the market for a long time and understand its needs well. The LHS market is lucrative and we want to be a one-stop-shop providing all services." How well are these apps doing? Most players decline to discuss revenues, maintaining it is early days yet, though UrbanClap's Bahal claims Rs 10 crore a month, while Jack On Block's Vatsa puts his at "a few crore rupees" per month. All agree that margins are high, around 25 to 40 per cent, and that growth, not maximising revenue, is the key focus at present. Revenue and profit will also vary according to the service model the company follows, the footprint it has and the segment it operates in.

But there is also consensus that not all of them will thrive. "There cannot be 180 winners," says Bahal. "At best, a handful will prevail - those with deep pockets, substantial funding and execution capabilities." Housejoy's Kumar agrees. "I think this is a winner-takes-all kind of market," he says. "Already there is a lot of land grab (poaching of customers) happening to emerge as the largest player." Those hit are taking precautionary steps: LocalOye, for instance, has laid off 60 of its call-centre employees. "We're prioritising efforts at better monetisation," says Rao. Vatsa notes that technology is not all in this business. "This is a people business, where growth will be slow and will need a methodical approach," he says.

The inspiration for LHS apps no doubt comes from overseas. In the US, it is a thriving market, with companies such as Thumbtack, Red Beacon, ServiceMagic, Zaask, Hourville, TaskRabbit and Angie's List among the heavyweights. Thumbtack alone provides around $1.8 billion worth of business to local service providers annually, as per an estimate. Amazon, which has invested in Housejoy, has its own Amazon House Services in the US.

The big e-commerce players are watching these developments closely. What will happen if they, too, jump into the fray, providing services alongside goods, is anybody's guess.