The dip in crude oil prices is a huge positive for the Indian economy, but PSU oil firms still have a long way to go. In July 2014, when Finance Minister Arun Jaitley was presenting his maiden Budget, the NDA government had just taken over. Talks of deficient monsoon rains were in the air. Crude oil was surging amid the uncertainties in Syria and West Asia. In fact, global crude oil price, which was between $107 and $112 per barrel and was expected to touch the $150 mark, could have thrown a spanner in the works of the new dispensation at the Centre.

However, crude prices turned out to be the FM's biggest facilitator in pushing reforms. The benchmark Brent crude crashed below $45 a barrel on August 24, 2014, for the first time since March 2009. By October 8, the price of the Indian crude oil Basket, computed by the Petroleum Planning and Analysis Cell (PPAC) of the petroleum ministry, was down to $49.81 from $55 per barrel. For the Centre, it was a godsend, providing Jaitley with the opportunity to clean up the books of Indian oil companies and look beyond the subsidy maze.

Along with Dharmendra Pradhan, Minister of State, Independent Charge, Ministry Of Petroleum and Natural Gas, the finance minister pulled the plug on cash subsidies on diesel in October 2014 and, subsequently, launched a scheme for direct transfer of subsidy for liquefied petroleum gas (LPG) in March 2015. Pradhan is now working on subsidy disbursement of kerosene as well with chief ministers of all the states. What's more, Jaitley is not having to eat away into the profits of PSU oil companies (ONGC, GAIL and Oil India) to compensate oil marketing companies (Indian Oil Corporation, Hindustan Petroleum Corporation and Bharat Petroleum), nor provide budgetary support, to sell products at subsidised rates. In the first three quarters of 2014/15, the Centre had compensated the OMCs with Rs 67,091 crore worth of assistance from upstream firms including ONGC and OIL. Gas transportation company GAIL was exempted from sharing the subsidy burden earlier.

"Low prices of crude oil and petroleum products in the international market worry me. But it is a great opportunity for importers like India to set their house in order; rework the web of subsidies and make them more efficient," says Michiel Soeting, Global Chairman Energy and Natural Resources, KPMG LLP, adding: "I don't see the surge in prices happening in the near future, so there is some time in hand as well." 'While many of the global E&P companies have responded to this situation by cutting down their investments, ONGC takes this as an opportunity to build its assets in this environment of lower costs,' says D K Sarraf CMD, ONGC
After rationalisation, ONGC's net realisation improved to $58.92 a barrel in June this year from $47.14 a barrel a year ago. The single biggest contributor was the no-subsidy-burden-sharing move. So it was for Oil India. Now, the NDA government is pushing the oil companies to create assets and to start new projects with the surplus money. The rigs and other essential equipment are now available at cheaper rates and this could help a majority of the national oil companies to expand their exploration activities.

Private oil producers, such as Anil Agarwal's Cairn India, are, however, still under stress. The company has decided to reduce its capital expenditure by 60 per cent, from $1.2 billion last year to $500 million in 2015/16. It also plans to produce only from those wells that are viable. It operates the country's biggest on-land oil block at Barmer and offers crude at a 15 per cent discount to Brent. But the prices are withering away its profits, as it has to pay a fixed amount of Rs 4,500 per tonne of oil produced from the two blocks that were awarded before the New Exploration Licen-sing Policy (NELP) of 2014, came into effect.

ONGC, on the other hand, is expected to spend Rs 36,000 crore as capital expenditure from Rs 32,309 crore last year. "There is an opportunity to explore more. ONGC has called in fresh tenders to engage rigs and other equipment. The outlook for oil prices is very positive and prices are bound to go up. The assets in North America - shale plays and oil sands, along with marginal fields - are under immense pressure to cut production. We have this window to make the most of it," says R.S. Sharma, Chairman of industry lobby group FICCI's hydrocarbon committee and former chairman and managing director of ONGC. Dinesh Kumar Sarraf, the incumbent CMD, agrees. "While many global exploration and production companies have responded to this situation by cutting their investments, ONGC has taken this as an opportunity to build its assets," he told his shareholders in September.

ONGC has submitted a field development plan for KG-DWN-98/2 block - a deep water block off the eastern coast of Krishna Godavari Basin. It could be the biggest find for ONGC after Bombay High. Therefore, it is busy debating how to make the project commercially viable despite the recession in the crude oil market. 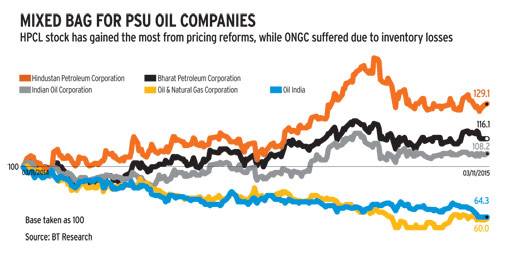 The NDA government is also auctioning 69 of the 165 marginal fields (86 onshore and 79 offshore) owned by ONGC and OIL, because at current prices, it is not commercially viable for the PSU oil companies to produce from these fields. Smaller technology and equipment companies are expected to bid for these blocks with 89 MT of oil and gas reserves. If the Centre's plans are realised, it will not only improve the balance sheets of ONGC and OIL, but will also improve the reserves of the country. Globally, smaller players have put their money on shale reserves in the US, oil sands in Canada, and gas projects of many other countries including Africa and Australia.

The lower burden of subsidies has also helped oil marketing companies in the past one year. Following the price decontrol of both petrol and diesel, oil marketing companies are free to review the prices every fortnight, based on the average international prices, exchange rate of the US dollar and excise duties. However, according to sources, politics still plays a role in determining the prices of the products. For example, in mid-September, OMCs did not revise the price of diesel and petrol despite a deprecation of the rupee and a slight increase in prices, globally. "There could be aberrations, but revision of the prices is happening regularly, this is good enough to improve the cash flow of these companies," says a top executive of a private oil marketing company, adding: "The revision of prices should be sacrosanct to improve the market environment." RIL, Shell and Essar Oil compete with the PSUs in the downstream segment.

However, LPG and kerosene subsidies could still be a drag on the Centre. With an average crude oil price of $60 per barrel, LPG and kerosene subsidies for 2015/16 will be around Rs 18,000 crore and Rs 13,000 crore, respectively. "If you transfer the subsidy amount directly to the bank accounts of consumers, it improves the cash flow of OMCs. This would allow timely payments from the finance ministry. And OMCs would not have to take debt to meet operational expenditures," says Narendra Taneja, noted energy expert and former national convener of the BJP's energy cell. According to the PPAC report of May 2015, IOCL, BPCL and HPCL collectively borrowed Rs 88,681 crore in 2014/15, compared to Rs 1,38,749 crore last fiscal - a fall of over 37 per cent. Analysts believe this is largely because the cash flow of these companies has improved. Inventory loss is the difference between the buying price of crude oil and the selling price of finished products. Sample this: without the inventory loss, the gross refining margin of IOCL should have been $6.82 per barrel in the second quarter (July to September), but it reported a margin of only $1.95. Besides, the retailers were impacted with the continuous fall of the Indian currency. "IOCL lost Rs 1,100 crore (out of the total loss of Rs 329 crore) in the second quarter alone because of forex losses," says Ashok of Indian Oil.

Other PSU retailers are also facing a similar problem. There is a surge in demand as well. During 2014/15, the demand for refined petroleum products grew by 4.2 per cent to 165 million tonnes. This year, too, it is expected to grow by 5 per cent. Because of low prices, revenues might be down for the PSU companies, but over the long term they might be at an advantage if they take the opportunity to get the fundamentals right. If the government chooses to continue with its reforms measures even when crude oil prices surge, Indian oil companies might find themselves well-oiled to meet the growing demand.