As Mukesh Ambani's children play a greater role in Reliance Industries, the group is adding muscle to its digital, retail and petrochemicals businesses 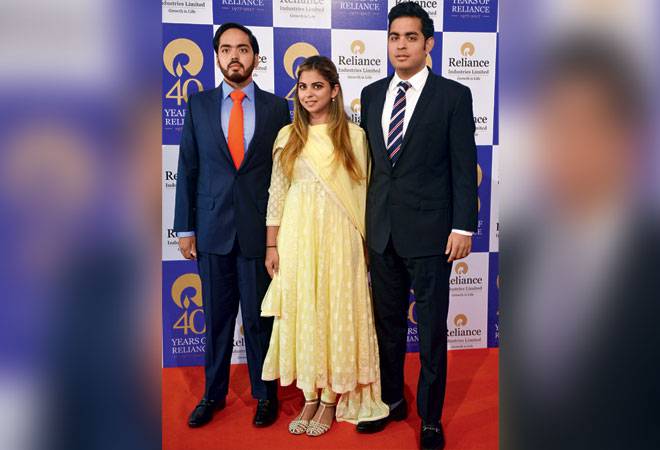 If you thought Mukesh Ambani and Mark Zuckerberg sat across a table, assisted by a battery of experts, to frame the Facebook-Jio deal, you are mistaken. Ambanis twin children Isha and Akash led talks for sale of a stake in Jio Platforms (JPL), flying down multiple times to Facebook headquarters in Menlo Park, California, for negotiations. The senior Ambani was given the minutes of the negotiations by the children. The details were shared often at dinner time in Antilla.

The stake sale is a step towards transforming the business empire founded by late Dhirubhai Ambani as a yarn trading company in Mumbai's Masjid Bunder about 63 years ago. One aim is to rid Reliance Industries (RIL) of a bulk of the massive Rs 3.36 lakh crore gross debt accumulated to fund growth businesses - Reliance Jio, Reliance Retail and petrochemicals. The other is to prepare the group for a digital/consumer future. For years, petrochemicals and refining stood taller than others. That is changing. In fact, Ambani doesn't even call RIL an oil and gas conglomerate any more. Instead, it's being positioned as a technology company so that the larger objectives are clear: build three businesses - refining & petrochemicals, digital & telecom and retail - of global scale; cut off financial inter-dependence of these businesses; create debt-free balance sheets.

Facebook is buying 9.99 per cent equity in JPL for Rs 43,574 crore. This values the digital and telecom company at Rs 4.62 lakh crore. This has come amid the coronavirus pandemic that has brought the world economy on its knees and a 41 per cent fall in RIL stock price over the last few months. The deal typifies what Ambani once said, "Our fundamental belief is that for us growth is a way of life and we have to grow at all times". JPL signed four more deals within two weeks of the Facebook announcement with American private equity giants - Silver Lake, Vista Equity Partners, General Atlantic and KKR - worth a total Rs 78,562 crore, and launched a rights issue to raise an eye-popping Rs 53,125 crore. Saudi Arabia's $320 billion sovereign wealth fund, Public Investment Fund, is also in talks to pick up a stake in JPL.

The massive fundraising to deleverage RIL is not over. The world's largest publicly listed company, Saudi Aramco, is doing due diligence to buy a 20 per cent stake in the refining and petrochemicals business for Rs 1.14 lakh crore. Aramco will pick up the stake in the newly floated subsidiary, Reliance O2C Ltd, in which oil and petrochemical businesses are being shifted. Ambani has already completed negotiations with British oil giant BP Plc for selling 49 per cent stake in his fuel station business for Rs 7,000 crore. The brand will be renamed as 'Jio-BP. The mission is zero net debt by March 2021. However, the pace at which the deals are being signed, the target will be met by December 2020, says V. Srikanth, Joint Chief Financial Officer, RIL.

RIL is also looking for buyers for a stake in retail holding company Reliance Retail Ventures Ltd. It will also divest the optical fiber investment trust (InvIT), land parcels that it bought for building special economic zones in Mumbai and some financial investments. Ambani had mentioned in the last shareholder meeting that RIL is "de-emphasising" its loss-making shale gas business in the US and will focus only on India, hinting he may sell the US shale gas business, which is bleeding because of crude oil price crash.

The intention seems to be to unlock value for now and convert group companies into technology driven, zero liability, entrepreneurial entities like Alphabet or Microsoft or Amazon. Building three equally strong businesses may also ease transition of power to the third generation - Isha, Akash and Anant. The twins are fully into the business and part of RIL's technological transformation; Anant is yet to join the business.

Refining and petrochemicals were accounting for 90 per cent of RIL's cash till recently. The money was being ploughed into consumer businesses - retail and telecom - that were growing at a frenetic pace. The retail arm, for years a small player, way behind Kishore Biyanis and Aditya Birla groups businesses, grew at a scorching pace post 2015. In telecom, launched in 2016, cracking into fiefdoms of giants Bharti Airtel, Vodafone and Idea looked nearly impossible. But the bets are paying off. In the January-March quarter, digital and retail businesses combined contributed 35 per cent to RIL cash flows. Refining and petrochemicals contributed 60 per cent.

Ambani took the bet to invest nearly Rs 4 lakh crore to build Reliance Jio and the supplementary digital businesses. The effort started 10 years back. Besides debt, he used the large cash flows from refining. Reliance Retail was founded in a similar way in 2006.

The journey was not smooth. In some states, Ambani initially failed to scale up Reliance Retail because of opposition from local kiranas and political parties. However, he persisted, and managed to turn things around in the last five years. Reliance Retail has achieved multifold growth since 2015, and that too during a period when established players such as Future Retail and More weakened and e-tailers like Amazon and Flipkart failed to expand to Tier-II and Tier-III cities. In FY20, retail posted earnings before interest and tax (EBIT) of Rs 8,263 crore, 49 per cent more than in FY19. Its EBIT was Rs 417 crore in 2014/15. The revenue has risen from Rs 17,640 crore to Rs 1.63 lakh crore in the last five years. Reliance Retail is India's biggest retailer today.

Deloitte has ranked Reliance Retail as the fastest growing retail company in the world. It added 30 per cent more space and over 1,500 stores in FY20. A recent Bernstein research report says, "In retail, slower-than-expected footfalls, increase in capital expenditures and higher competition are key downside risks." The company is set to scale up e-commerce venture JioMart for countering Amazon and Walmart-owned Flipkart.

The digital services business, though smaller than retail in revenue, is valued much higher, at Rs 4.9 lakh crore. One reason is fast growth. Reliance Jio Infocomm posted a 87.65 per cent rise in net profit to Rs 5,562 crore in FY20 driven by subscriber additions and third-quarter tariff increase. It posted a 63.5 per cent rise in EBIT to Rs 14,363 crore and a 40.7 per cent rise in revenue to Rs 68,462 crore. Jio continued to extend its lead over rivals in January by adding 6.56 million users even as cash-strapped Vodafone Idea's subscriber base eroded, according to data from the Telecom Regulatory Authority of India. Reliance Jio's subscriber base at the end of January was 376.57 million, while Vodafone Idea was second at 329 million. Jio's subscriber base further increased to 387.5 million at the end of March. Ambani aims to take Jio Fiber to more than two crore households and is targeting 99 per cent population coverage. The company is also planning to target five crore-plus households for cable networks DEN and Hathway.

Mark Zuckerberg, CEO of Facebook, told analysts during the recent earnings call, "Certainly, all the products and technology that we're building to enable that (Jio) partnership are going to be things that we want to do around the world." Facebook, through its WhatsApp platform, brings in synergies for RIL's JioMart initiative. There are also immense possibilities in e-payments, blockchain and social media transactions. Facebook has got one board seat in JPL.

In the traditional business, Ambani wants to switch focus from fuel manufacturing/refining to high-margin petrochemicals as the fossil fuel business is facing hardships due to advent of electric mobility and falling demand due to a global slowdown. RIL has invested about Rs 1 lakh crore to expand petrochemical capacities in Jamnagar, Gujarat. Saudi Arabia has agreed to invest Rs 1.14 lakh crore in Reliance O2C Ltd for a 20 per cent stake.

Ambani wanted to do the Aramco deal quickly in view of his plan to make RIL a net debt free company by March 2021. While the world was waiting for the details of the Aramco deal, the coronavirus pandemic and crash in crude oil prices played spoilsport. It was at this point that Isha and Akash managed to pull off the deal with Facebook.

The Aramco deal could provide RIL financial muscle, says HSBC Global Research. Besides creating a benchmark valuation for RIL's O2C business of Rs 5.7 lakh crore, it will provide an additional Rs 1.1 lakh crore in cash flow, taking it to a strong net cash position from a net debt position, the research firm says in a report. "With a stake in RIL, Aramco would not just have a stake in one of the worlds best refineries and largest integrated petrochemical complexes but also access to one of the fastest-growing markets - a ready-made market for its crude and offering a potentially bigger downstream role in future," says the report.

Zeroing in on Debt

Ambani recently sold the tower InvIT and pipeline infrastructure to Brookfield for Rs 25,215 crore and Rs 13,000 crore, respectively, as the first step to pare debt. RIL has net debt of Rs 1,61,035 crore. The outstanding debt stood at Rs 3.36 lakh crore in March 2020 while cash and cash equivalents were Rs 1.75 lakh crore. The standalone balance sheet has a debt of Rs 2.62 lakh crore, while Jio and Reliance Retail have debts of Rs 23,000 crore and Rs 4,600 crore, respectively.

JP Morgan Equity Research says, "Given increase in debt and continued elevated capex, the deals are welcome and should allow for deleveraging." It says transfer of Rs 70,000 crore debt to two InviTs in tower and optical fibre, pending capital expenditure payments of Rs 50,000 crore and spectrum fee of Rs 20,000 crore are not part of the gross debt of Rs 3.36 lakh crore. However, Bernstein says stake sales and rights issue will reduce net debt to net cash of Rs 50,000 crore by next financial year. Besides, slowing capital expenditure and rising free cash flow will accelerate deleveraging.

Does this mean all challenges have been overcome? India Inc has seen huge investments by global corporations in the past also, including acquisition of Flipkart by Walmart for $16 billion; Essar Oil by Rosneft for $13 billion; and Hutch by Vodafone for $11 billion. In many cases, including Docomo's stake in Tata Tele, Daiichi Sankyos stake in Ranbaxy and Walt Disneys stake in UTV, foreign acquirers burnt their fingers. Chevron, which picked up a 5 per cent stake in Reliance Petroleum, also had to exit in losses. BP Plc had to write off a part of its $7.2 billion investments made in 2011 in RIL's exploration and production assets due to losses. The new entrants in RIL are expecting a more profitable journey.

Whose Food is It, Anyway?