Wings of their own

Lost among the flood of newspaper reports on March 31, the day after the keenly fought and politically charged India-Pakistan World Cup semifinal match was held in Mohali, was this little snippet: "76 private jets and charters land in Chandigarh."

From the $60-million (Rs 270-crore) Airbus Corporate Jets of Reliance Industries chief Mukesh Ambani and UB Group's Vijay Mallya, to the under-$5 million second-hand Beechcraft Turboprops used by lesser-known tycoons, they all landed at the usually sleepy Chandigarh International Airport on March 30, giving air traffic controllers there, unused to so much airport activity, a harrowing time. They dropped off their high-profile passengers and promptly took off again to park at Delhi airport 250 km away.

Chandigarh has only three parking bays since, on normal days, it needs to handle only 22 to 26 flights. With the economy booming and private industry flourishing, private jets have, over the years, become a regular mode of transport for the doyens of Indian industry. They spell glamour, success and indeed, corporate excess. So, if Ambani owns as many as three planes - an ACJ 319 and two Bombardier Global 5000 jets - younger brother Anil has two as well - a Dassault Falcon 2000 and a Bombardier Global 5000. Flamboyant businessman Mallya also owns two jets - an ACJ 319 and an Airbus 133.

"Private jets give us a lot of flexibility in flying to areas not accessible by commercial flights or when we are short of time. As our businesses expand, it's a sure and convenient way of saving time and effort," says Gautam Singhania, Chairman and Managing Director of Raymond.

Singhania, too, flew in his nineseater Challenger 604 jet to Chandigarh to support Team India at Mohali. He was also in the stands to cheer the Men in Blue at Nagpur and Ahmedabad against South Africa and Australia, respectively, flying to both venues in his private aircraft.

Says aviation analyst Rajan Mehra: "Business aviation, or the use of private planes and helicopters by companies, is on the rise as a result of the sustained economic recovery of the country. Companies realise that owning your own jet is value for money. It saves time, cost, effort and adds to convenience and comfort."

Biggest market in Asia
The flourishing private jets market in India constitutes 12 per cent of the global market and is bigger than that in Asian superpowers China and Japan. The country has the maximum number of private jets in Asia - 142 against China's 93 and Japan's 76, according to Frost & Sullivan, the global business research and consulting firm - and manufacturers and analysts expect the number to double by 2021.

Naturally, global manufacturers such as Gulfstream, Bombardier and Embraer are all betting big on India. Bombardier of Canada leads the pack having sold 24 jets in this country - a mix of small Learjets, mid-size Challengers and bigger and longdistance Global business jets.

According to a Bombardier forecast, India's business jet fleet will grow to 440 aircraft by 2019. "We expect industry-wide deliveries of 325 aircraft in India till 2021," says Nilesh Pattanayak, Managing Director, South Asia, Bombardier Business Aircraft.

Brazilian jet manufacturer Embraer, which has three jets in India and hopes to take the number to 20 in the next two years, aims to garner $1 billion, or Rs 4,500 crore, in sales in India by 2018. Gulfstream is eyeing 40 per cent of India's longrange business jet market. "Thanks to Indian businessmen and their expanding interests, the country has developed into a successful market for Gulfstream, with the number in use growing from five in 2001 to 21 in early 2011," says Jason Akovenko, Vice President of Asia-Pacific Region at Gulfstream Aerospace Corp. 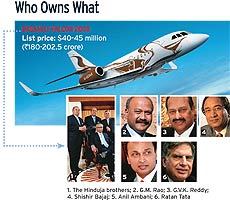 Click here to Enlarge
The jet makers will not divulge the names of their target customers but obviously it is India's growing number of billionaires they are aiming at. The Wealth Report 2011 compiled recently by luxury property firm Knight Frank and Citi Private Bank found super rich Indians most keen on buying private jets over the next five years.

For those who cannot afford to buy a jet, a more convenient option is to charter a flight. Charter flights, too, are a booming business. Sanjay Godhwani, CEO and Managing Director of Religare Voyages, a Delhibased provider of air charter services, says the industry is growing at an astounding 70 per cent. Religare Voyages's client base has over 500 companies, which book 400 to 600 hours of flight time on an average each year. The Rs 1,200-crore firm currently has 12 aircraft and helicopters, and plans to increase its fleet to 20 in two years.

There are other charter companies like Taj Air from the Tata Group, Air Charters India and Private Jet Charter, which offer prompt and hassle-free charter services to those wishing to avoid the inconveniences of travel by commercial flights.

Ground view
Maintaining a jet, however, is an expensive affair, too. To comply with national and global safety norms, a private jet must be looked after regularly. The operating costs include fuel, labour and maintenance charges, aircraft insurance, crew training and crew salaries. The allocation of parking space, as seen in Chandigarh, is also a problem. The jets can only be parked at airports in metros such as Delhi, Mumbai and Bangalore, which have the space for them. But there are problems given the commercial nature of these airports.

The landing and parking charges depend on the aircraft's weight, number of seats, landing time and duration of use of parking facilities, and the choice of airport. Landing charges vary between Rs 436 for a very light jet and Rs 14,000 for heavy ones. "Duty and taxes on the import of business aircraft, the need for additional aviation infrastructure, stringent government norms, long procedures and payment are major hindrances to our business," says Bombardier's Pattanayak.

The constraints, for now, have done little to dissuade the high and mighty from buying jets. For them, the existing constraints are but minor irritants before take off.