From a regional player till 2013 to 107 showrooms in 21 states in 2020, Kalyan Jewellers has come a long way. It is now looking to take on Tata Group's Tanishq for the No. 1 spot in the countrys organised retail jewellery segment 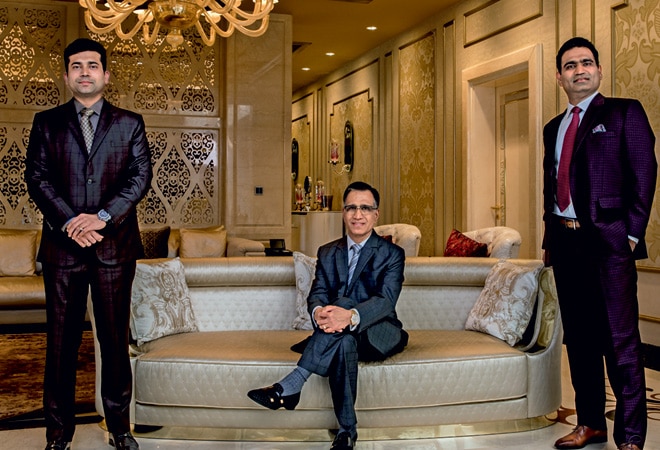 Kalyan Jewellers' Chairman and Managing Director T.S. Kalyanaraman's grandfather moved about a century ago from Kumbakonam in Tamil Nadu to start textile shops in Thrissur, the cultural and economic capital of Central Kerala. In 1972, he inherited a textile shop and in 1993 thought of diversifying to jewellery. His customers, who came to Thrissur for weddings and festival shopping, gave him the idea of starting a jewellery shop in the same town. At that time, there were a few known shops in Thrissur such as Ayodhya, Chiriyankandathu and Fashion, but options were limited and orders placed based on sample show pieces were delivered only after a waiting period running into weeks. It prompted Kalyanaraman, known locally as 'Swami', to offer a new jewellery shopping experience - a plush and well-decorated shop on a 4,000-square-feet area, with four salesmen, car parking facilities and a wide choice of ready-to-wear ornaments. The venture started in 1993, which cost Kalyanaraman around Rs 75 lakh (Rs 25 lakh own funds and Rs 50-lakh debt), became an instant hit. However, it took him another seven years to open a new showroom at Palakkad, about 70 kilometers from Thrissur. By 2003, Kalyanaraman had opened only five showrooms in South India, while other jewellers were setting up many branches. The strategy was to study the local market deeply and go for 'hyperlocalisation'. For the next 10 years, Kalyan continued to be a traditional gold jeweler with a strong regional grip, 25 showrooms and Rs 1,000 crore in revenues.

Today, the company is the second-largest domestic jewellery retailer, and possibly the only competitor to Titan's Tanishq brand. With 107 showrooms in 21 states and 30 abroad, Kalyan is now preparing the ground for the next level of growth. It plans to launch an initial public offering (IPO) worth Rs 1,750 crore. "Our target is to double revenues and number of showrooms by 2025," T.S. Kalyanaraman told Business Today during an interaction last year.

Growing In These Times

Kalyan's growth plans come at a time when Covid-19 has disrupted the sector. According to rating agency Crisil, which recently studied the performance of 92 retail jewellers, the number of new store additions is expected to reduce to almost a third of the average between 2016/17 and 2019/20, while capital investments are expected to go down by 70 per cent to Rs 650-700 crore this fiscal. Sales are expected to be lower by 35-40 per cent, the steepest on-year drop in over a decade. "Increased inventory holding owing to a sharp decline in sales volume, and lower store expansion, will affect the credit metrics of jewellers," says Mohit Makhija, Director, Crisil Ratings.

Titan Company, which has 1,736 stores selling watches, eyeware and jewellery items, clocked revenues of Rs 21,204 crore in 2019/20, but saw a 62 per cent year-on-year decline in the first quarter of 2020/21 due to Covid-19. The jewellery division recorded Rs 1,783-crore revenue during the quarter, a 56 per cent fall from Rs 4,047 crore a year ago. Jewellery is Titan's largest and most consistently growing business - from Rs 16,030 crore in revenue and Rs 1,948 crore in profit in 2018/19 to Rs 16,738 crore and Rs 2,061 crore in 2019/20. "We expect to get back to normalcy by the fourth quarter of this year. The companys reassessment of its cost structure and strong balance sheet will help create a stronger base for a sustainably higher profit margin business," C.K. Venkataraman, MD, Titan, said recently.

Hyperlocal To Pay Off

But that does not mean Kalyan is on a back foot, say independent industry observers. Its strong point is its hyper-localisation strategy. In Deloitte's Global Powers of Luxury Goods 2019 report, Titan was ranked 27th, the fourth fastest-growing global luxury goods company. Other Indian companies that made it to the top 100 include Kalyan Jewellers (35), PC Jewellers (40), Joyalukkas (47) and Tribhovandas Bhimji Zaveri (87).

Independent observers say if Titan launched Tanishq as an aspirational premium brand and later extended it to other categories of jewellery retailing, Kalyan built its position from a regional gold jewellery seller to an aspirational brand. Titan started Tanishq in 1996 as a premium jewellery brand. It later added Zoya as a pure luxury brand, followed by Mia in 2011, targeting the youth. In 2016, it acquired majority stake in online jewellery player CaratLane. As of June, Titan has 333 Tanishq stores in 207 towns, 92 CaratLane stores in 33 towns, and 39 Mia stores in 20 towns.

Compared to Titan, hyperlocal Kalyan operates its stores in Tier-1, Tier-II and Tier-III cities, and has restricted itself to a jewellery retailer. Its Chennai showroom is over 40,000 sq feet, and other flagship stores in Delhi, Mumbai, Trivandrum, Kolkata, Bengaluru and Hyderabad are over 10,000 sq feet each. Even Tier-III showrooms are in the 5,000-7,000 sq ft range, and in each of these showrooms there is a local inventory of ornaments in over 20 sub-brands. Every year, the country accounts for 10 million weddings and related 300-400 tonnes of gold purchase. About 70 per cent of Kalyan's revenues come from the sale of wedding jewellery. It has an exclusive wedding collection, 'Muhurat', and uses 761 'My Kalyan' service centres with a field force of 2,000-plus executives to sensitise villagers on gold buying and attract them to the stores, instead of relying on traditional, unorganised local players.

"Kalyan's strategy is to compete with established local players and organised retailers in different geographies. You cannot sell the same jewellery having demand in Thrissur in Jalandhar or Dispur, as preferences in India are influenced by lots of factors, which Kalyan leveraged nationally," says an industry analyst, who did now want to be quoted because of the company's impending IPO.

Competition for Titan and Kalyan are limited, since most of the remaining organised chains are regional players, who follow a franchise model for expansion. Take the case of unlisted Calicut-based Malabar Gold & Diamonds, which claim to be Indias top jeweller in terms of revenues and one among the top five gold and jewellery retailers worldwide. Of its 260 showrooms, over 140 are outside India and follow a unique model of co-operative entrepreneurship with over 4,700 investors and 100-plus operating companies under one holding company. "Our target is to double the number of showrooms in India and enter 10 more countries within the next three years to become the worlds largest jewellery chain with revenues of Rs 50,000 crore," MP Ahammed, Founder and Chairman of Malabar Gold, told Business Today in January. Other competitors such as Joyalukkas is predominantly West Asia based, local player PC Jewellers has seen revenues falling from Rs 8,461 crore in 2018/19 to Rs 5,016 crore in 2019/20, and listed ones like Tribhovandas Bhimji Zaveri and Thangamayil are yet to clock revenues in excess of Rs 2,000 crore per year.

As the industry tries to shrug off the pangs of Covid-19, Kalyan is readying for a renewed start to become India's leading retail jeweller.