The future of telecom belongs to large players. Smaller ones have already started packing their bags.
By Manu Kaushik | Print Edition: July 3, 2016 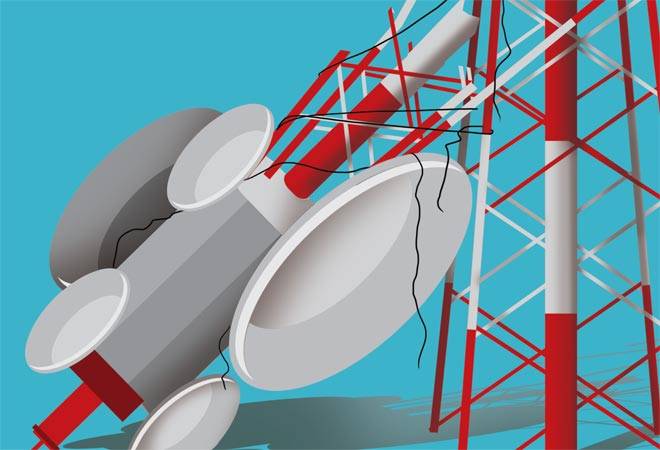 In a meeting last September, Arvind Bali, CEO of telecom operator Videocon Telecom, told Business Today: "We have to run this business for the long term." His confidence was understandable, given that the government was about to announce trading and sharing norms for telecom spectrum. Such norms would allow telecom players - not just Videocon, but others as well - to transfer their idle spectrum to other service providers who are facing a spectrum crunch, or pool spectrum to bring together their fragmented spectrum holdings, resulting in better spectral efficiency. It was something Videocon Telecom was looking forward to. In October, the government announced the guidelines. In the November 2012 spectrum auction, the company had regained spectrum in six circles - after losing most of the 18 circles it held earlier when the Supreme Court famously cancelled 122 licences given in 2008 by the then telecom minister A. Raja - and had plans to launch 4G services there, but the market was not fully ready. So, like other telcos, it had been waiting for trading and sharing norms to come into force. "We are in discussion with three large operators...we will start with [spectrum] sharing," Bali had said.

However, last November, Videocon sold its spectrum in two circles to Idea Cellular before scrapping the move and finalising a Rs 4,428-crore deal with Bharti Airtel for its spectrum in six circles. It earned a hefty profit, given that the spectrum was bought at just Rs 2,221 crore. Videocon Telecom refused to participate in this story, but a senior executive of the company said it no longer has an India strategy: "We are left with just Punjab circle."

What made Bali change his mind - from sharing the spectrum with other operators to nearly exiting from the business? Telecom has been a loss-making venture all along for the $5-billion Videocon group, but that's not all. In the telecom sector, the scenario is changing rapidly. Technology - 3G, 4G, WiMAX - is changing fast, and smaller operators are not in a position to invest adequately to upgrade their networks. On the other hand, the strong network holdings and large investments by big telcos have made it difficult for smaller players to survive on their own. As a result, large operators like Bharti Airtel, Vodafone and Idea Cellular are growing their subscriber base at a significant pace (see Current Wireless Subscriber Base), even as most of the smaller ones see their share of the pie shrinking. The impending launch of Reliance Jio's 4G services, expected to be a big draw for consumers, has further queered the pitch for small telecom companies.

Unsurprisingly, a slew of deals has surfaced in the past few quarters (see Cross Connections), which is expected to change the landscape of the telecom sector. "The structural issues such as rising spectrum prices, mounting losses and high debt levels are forcing smaller operators to either sell their spectrum or consider merger or even shut shop," says Bhupendra Tiwary, analyst at ICICI Securities.

Videocon may not be the only one exiting. Norwegian telecom company Telenor is also analysing its strategy for the Indian market. In the March quarter, Telenor posted operating losses of Rs 2,530 crore, which was a 19-fold jump over the losses of the corresponding quarter last year. In fact, Telenor has been posting EBITDA (earnings before interest, tax, depreciation and amortisation) losses since 2009. In April, when Telenor's global CEO Sigve Brekke announced its results, he said that "long-term presence in India is dependent on our ability to secure additional spectrum. We are not able to compete with the current spectrum portfolio we have in the growing data market...We are looking at upcoming auctions and potential trading options".

That could be challenging for Telenor, given that the upcoming auctions are expected to be the most exorbitant in the history of telecom auctions. TRAI (Telecom Regulatory Authority of India) has recommended Rs 11,485 crore per MHz base price for auction of spectrum in 700 MHz - the highest price for spectrum sold in India. Even the large players deem these prices prohibitive. For now, though, Telenor is putting up a brave face. "We do not comment on market rumours and speculations," says Sharad Mehrotra, CEO, Telenor (India) Communications. "Telenor sees India as a growth market. Last August, we announced a network modernisation programme where over 24,000 sites were to be swapped with modern equipment by Huawei. The investment earmarked for this is Rs 1,240 crore."

Then, Tata Group's telecom venture - with a mere 60.27 million subscribers as of February 2016 and presence in 19 circles - is in dire straits. Focus on CDMA technology, a confused strategy and more aggressive competitors have made Tata Teleservices Limited (TTL) one of India's worst performing operators. In the first half of 2015/16, it posted net losses of Rs 1,420 crore on revenue of Rs 5,390 crore. Over the past two years, Tata Group has been desperately looking for a buyer for TTL. Negotiations happened with various operators, but in vain. The company did not respond to an email sent by BT.

The other option is to consolidate. Reliance Communications (RCom), for instance, is planning a merger with two smaller telcos - Sistema Shyam TeleServices (SSTL) that operates MTS brand, and Aircel. RCom's and MTS's market shares have been dipping for two years whereas Aircel's is showing marginal uptrend in subscriber numbers (see Current Wireless Subscriber Base). If the merger works out, the new entity will have a subscriber base almost on par with the No. 2, Vodafone.

Analysts believe the merger will give a new lease of life to the three operators. "They would have been completely marginalised in the next two to three years," says an analyst. There are other challenges, including the fact that all three entities have significant debt on their books. As on December 31, 2015, RCom had Rs 40,479 crore of debt while Aircel, about Rs 18,000 crore. An analyst points out that Aircel's Rs 3,500-crore deal (for 2,300-MHz spectrum) with Bharti Airtel will help reduce Aircel's debt. The new entity is expected to have debt of around Rs 28,000 crore - with both RCom and Aircel contributing equally - provided RCom successfully reduces its debt by selling tower and optic fibre businesses.

Then, there are concerns over the portfolio of subscribers of this new entity. RCom's average revenue per user (ARPU) and number of postpaid users are low compared to the large operators. For instance, RCom's ARPU was Rs 157 in the December quarter, while Airtel's was Rs 194.

Experts say that RCom's inability to make sufficient investments in its networks can partly be resolved with its impending tie-up with Reliance Jio, which has already spent Rs 1.5 lakh crore in buying spectrum and building an ecosystem of services around 4G. It is expected to use RCom's spectrum as a fallback network.

Large operators hold the maximum amount of spectrum across the country, and continue to modernise their networks with significant investments. For instance, in key markets such as Delhi and Mumbai, as on January 2015, the spectrum holdings of Airtel (86.40 MHz) and Vodafone (84.40 MHz) exceeded the combined holding of RCom (58.80 MHz) and Aircel (17.6 MHz). In the case of 4G spectrum, the total holding of Airtel (560 MHz) and Reliance Jio (620 MHz) across all circles is far higher than even Idea Cellular (110 MHz) and Vodafone (80 MHz). The holding of other players is even lesser. 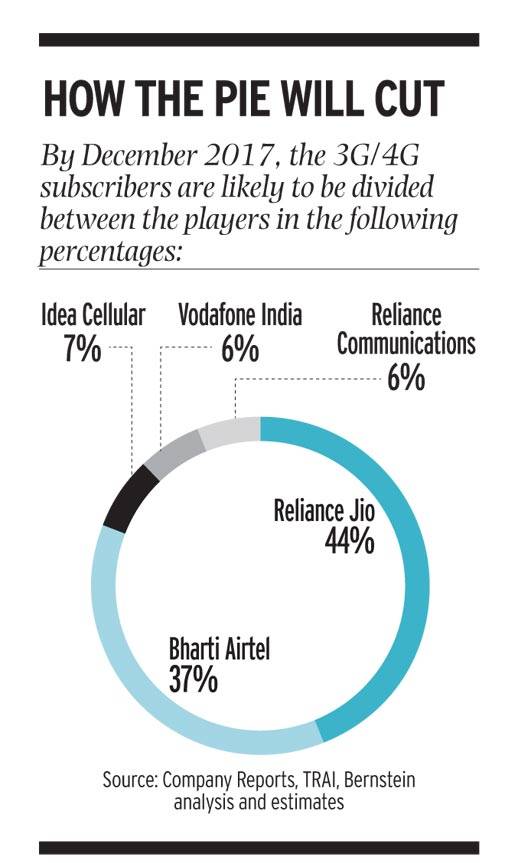 Since spectrum is limited and costly, the operators have to continuously upgrade their networks, which means putting up more towers when certain utilisation is reached. That involves both operational and capacity expansion costs. Spectrum holding alone doesn't make large players formidable. Airtel, for instance, announced a Rs 60,000-crore 'Project Leap' programme last year - a network modernisation plan - that includes doubling the base stations to over 300,000 in three years. (Base stations or BTS is a piece of network equipment that facilitates wireless communication between a device and network.) "Lack of investment in networks is the primary reason for the decline of RCom's subscriber base over the years," an analyst informs.

Adding to the growing divide between large and small telcos are the constant changes in technology and rising data consumption. It was a voice-only market, until, in 2010, the market witnessed the launch of 3G. The spectrum sold for 3G services was priced at a premium. Smaller operators rolled out 3G, too, but much slower than large telcos. Today, the focus has shifted to 4G. Expectedly, the smaller players don't have the financial muscle to invest in this new technology whereas large operators have made big investments. Smaller operators, however, have a different view. "Even 3G has not been exploited to its full potential," says Sunil Kuttam, Head, Data and Devices, Aircel. "It will take time for the larger market to adopt 4G in a big way."

Significantly, though, smartphone shipments in India crossed the 100 million mark in 2015, with 4G shipments outnumbering 3G shipments for the first time, as per International Data Corporation.

Most fringe operators have presence in limited number of circles. Telenor, for example, has presence in six circles, MTS in eight. A pan-India presence, like Airtel or Vodafone, has its benefits. "Suppose an operator is present only in two or three circles. When customers are travelling, I need to pay to some other operators to enable my users to make calls. I have to go for a commercial arrangement with other operators. That's revenue leakage," explains Sergey Savchenko, CEO of MTS India.

Sales and distribution is another key area. The bigger telcos seem to have established a distribution model that's difficult to emulate by new players. "It's as important as spectrum to win in the market place. The survival of smaller players will be tougher with large operators with deeper pockets lowering data and voice rates further," says an analyst.

T.V. Ramachandran, former head of GSM body COAI (Cellular Operators' Association of India), says, "The amount of spectrum that operators hold in India is 40 per cent of the global average. In India, the subscriber base is high and the propensity to talk is also high, but the spectrum is low. Universally, a mobile market can efficiently support three to four operators. That the market cannot support more than five players is not speculation, but an economic fact," he says. India has 12 telecom operators at present.

Most countries worldwide have licensed only three to five mobile operators. Some have seen consolidation in the number of mobile operators in the past few years. In the US, for instance, the market is now divided between Verizon Wireless, AT&T, T-Mobile US and Sprint with regional providers, including Alltel, Leap Wireless, MetroPCS and others, being acquired by large operators.

"It's a poker game with big bets. The market can sustain five players plus BSNL," says MTS's Savchenko. While more mergers and acquisitions may not improve the quality of services, they can most certainly bring economies of scale for large operators. The smaller players, meanwhile, are smart enough to understand that their days are numbered.

Bankruptcy law is ambitious in its scope