With its focus on industrial products, online marketplace Tolexo is tapping into an opportunity few have noticed so far. 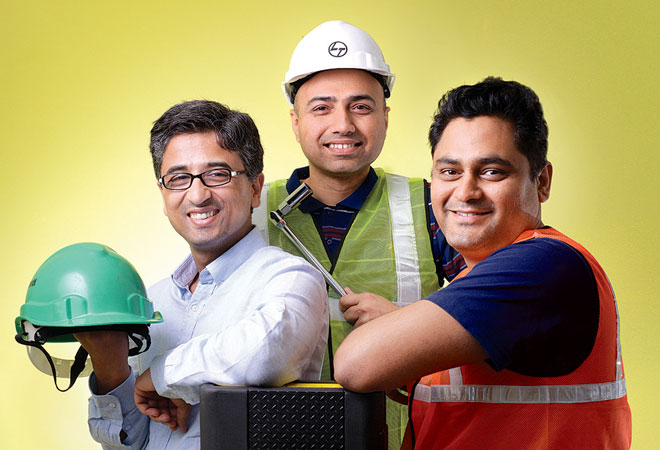 Last spring, food aficionado Karen Anand put together a Farmer's Market in the lawns of the luxury hotel Westin Gurgaon. Organic vegetables, bottled expresso, cheese, cold meats were in abundance; wine flowed. The Co-founder of IndiaMART.com Brijesh Agrawal, nearly as passionate about his spices as he is of entrepreneurship, picked up some bhut jolokia, a variety of pepper more than 200 times hotter than Tobasco sauce. He next met Navneet Rai right there to pitch a new company - according to him, an equally hot proposition.

The conversation with Rai, Co-founder of fashion e-tailer Inkfruit, acquired by Zovi in 2013, was about Tolexo. While IndiaMART is an online directory for businesses to discover suppliers and get their contact information, Agrawal was pitching a company that will be a full-fledged e-commerce marketplace for industrial finished products. He would target the small and medium enterprises (SMEs). Tolexo would list the products, the price information, facilitate online payments and track delivery.

"That afternoon, we spoke for three-and-a-half hours," says Agrawal. "We finally managed to convince each other that we will be able to build this together." Rai joined as the Co-founder of Tolexo. Harsh Kundra, the former head of technology at lifestyle e-tailer Jabong, also joined the founding team. The idea was to build a business-to-business (B2B) site but sex it up with the savvy of a consumer portal. The name 'Tolexo' doesnt mean anything - it was such a "catchy short name", says Agrawal.

Funded by IndiaMART, Tolexo Online Private Limited was incorporated in July 2014. Today, the site lists everything from safety and lab equipment to hand and power tools - it has over 600,000 stock keeping units (SKUs). The company is targeting 10 million products in the future. Its employee count is growing at a rapid pace; the firm currently has about 160 people.

"We started in mid-August, with the alpha version. We got on to the beta version in October last year," Agrawal says, sitting in his office in Noida's industrial belt. In less than a year, the company has hit a good revenue run rate - the firm is doing more than Rs 2 crore a month. "We are growing at 50-60 per cent month-on-month. Our revenue and monthly transactions are similar to what other e-commerce companies have done in their first one-and-a-half to two years. We are already there," says Agrawal. The company does not have a single dominant category yet. "People are trying to test the platform and the experience. If you look at B2B transactions where the value runs into a couple of lakh, that may take a little bit of time," the co-founder adds.

Tolexo quick facts
Tolexo's fast traction points to a large market in the industrial buying segment. There are 4.7 crore SMEs that need to secure bulk supplies. "The overall industrial and business goods opportunity in India is more than $1 trillion. The B2B wholesale market in itself is a $300-billion plus category," says Agrawal. Most of it is today offline, and so the challenge is to get businesses to buy online.

A large space attracts big competition. It is lurking nearby. The founders of Tolexo think AmazonSupply, the global retailer's industrial buying venture, will be in India soon. The United States has other successful companies in the industrial e-commerce space; Grainger, Inc., which had revenues of $10 billion in 2014, is often cited as a success.

As of now, Tolexo's India competition includes the brother-sister duo of Rahul and Swati Gupta, who started Industrybuying.com in 2013. The company has a hybrid online-offline model; apart from SMEs, it finds large customers and supplies industrial products directly. Tolexo would also have to compete with other marketplaces that don't brand themselves as niche industrial buying sites. ShopClues.com, for instance, started a wholesale business eight months ago. Although it does not target the industrial segment, sellers have listed products such as power tools and industrial gloves on its website. "We are targeting retailers, corporate houses and families right now. However, we will not stop people from listing industrial products that are more a commodity now," says Sanjay Sethi, CEO and Co-founder of ShopClues.

The SME segment has attracted other start-ups as well, although they are not competition to Tolexo. The Gurgaon-based Power2SME sources raw materials for its customers but not finished products.

But what was the need to incubate a company separate from IndiaMART? Its turns out that the DNA required to build a full-fledged e-commerce website is quite different from one that runs a directory.

"IndiaMART has a certain positioning in the market and it appeals to a certain audience. We understood that the DNA required for Tolexo would be very different - the people, the technology, the processes," explains Agrawal. People who are building Tolexo, for instance, need to know and work on both the pre- and post-ordering experience, and not just the contact experience that IndiaMART provides. "The experience can be made much more deeper by controlling it. So we tried to address the three problems that a buyer faces - convenience, selection, and pricing," adds Rai.

The founders think convenience in the B2B online segment will be the killer feature. "Ask a procurement guy the nightmare of buying from Chandni Chowk [in Delhi] and he will tell you," says Rai. Depending on the product, a small enterprise can end up stocking goods much before the time of consumption. That's where the problem of working capital comes into the picture. "Instead of something you need just 15 days before, you end up procuring it 90 days in advance. This blocking of capital is a challenge for a small company whose turnover is not more than Rs 5 crore. By providing clear delivery timelines, we help them solve this problem," he adds. The technology Tolexo has built allows forecasting of demand and matches it to the inventory sellers have.

Investors appear to be cautiously optimistic about the industrial supplies segment moving online. Is this sector ripe for disruption? "I am not 100 per cent sure. But we have to invest ahead of the curve," says Mukul Singhal, Principal at SAIF Partners. The venture capital firm recently invested $2 million in Industrybuying.com. "The B2B space is a very large market with high information opacity. But the biggest challenge will be the time taken for SMEs to adopt purchasing solutions," he says. "We have to figure out if the adoption happens over the next 12 to 18 months."

The funding Tolexo would need to keep growing and compete with Amazon will, therefore, be determined by the rate of technology adoption. IndiaMART has undisclosed investments from Intel Capital and Bennett, Coleman and Co. Ltd. But Tolexo needs more - it is looking to raise $100-150 million over the next 12 months.

"It is the market share we are chasing. We want the largest market share in the business space," says Rai. That sounds like Flipkart in its formative years. Nevertheless, it would be some time before this start-up becomes the bhut jolokia of industrial e-ecommerce.

Vistara is making a bold attempt in aviation market