Yummade, which sells fresh and preservative-free packaged food, wants to become a Rs 6,000-crore company by 2020 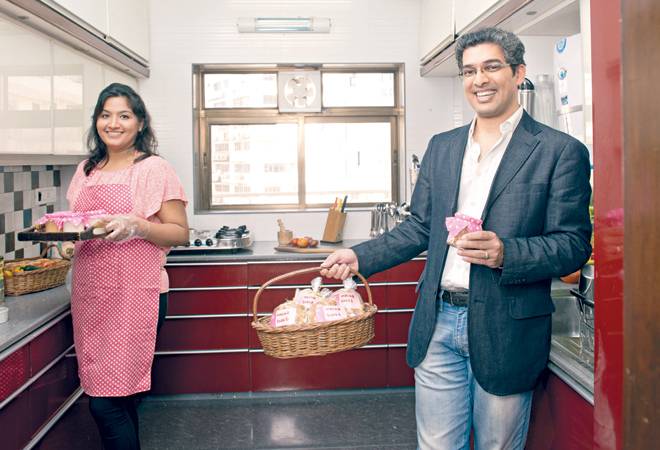 While working at A T Kearney, where he advised food companies, Gaurav Tandon started cutting down on consumption of packaged food. "I was part of discussions on tampering with recipes to cut costs. This made me wonder if packaged food was healthy," says Tandon, the 33-year-old co-founder of Yummade.in, citing the example of a company that wanted to replace cashew nut in cookies with ground nut.

"They said all they claimed was that their cookies had nuts but never specified which ones. The company was facing margin pressure and so wanted to reduce costs. This made me disillusioned," he says.

Tandon also gives the example of a bottle of mixed fruit jam in which the main ingredient is sugar, followed by fruit pulp (barely 10 per cent). Similarly, the oat content in oats noodles is just 3-5 per cent. This is enough to brand these as oats noodles.

That's why he broke ranks and started thinking about how to serve preservative-free, fresh packaged food to consumers. After all, it is an industry that is growing at rates that are impossible to ignore. Between 2010 and 2015, it grew from Rs 1,00,000 crore to Rs 2,00,000 crore, according to a Bain & Company report. The traditional category, which includes milk, bread and biscuits and accounts for 50 per cent market, is growing at 10 per cent every year. The rest of the market, which covers categories such as flavoured milk, beverages, snacks, and ready-to-eat & ready-to-cook products, is growing at 16-17 per cent a year.

Tandon wanted to tap into this huge pie but wondered if it was possible to produce jam with 70 per cent fruit pulp. He found that it was, though the price would be much higher than the Rs 70-80 that most jam bottles sell for. Also, most companies add generous quantities of preservatives to packaged jams and ketchups. This is to increase their shelf life as they are consumed weeks after they are manufactured. "After the jam or ketchup is made, it goes to a regional warehouse. From there, it goes to a distributor and, finally, to a retailer. By the time it reaches the consumer, it is five-six months old. The natural shelf life of jam is two-three months," says Tandon.

While thinking about a business model, he met his two partners, Mansharan Seth and Rohini Pangrikar. While Pangrikar is a techie, Seth was with the consumer arm of GlaxoSmithKline and took care of the Horlicks brand.

"I had just become a mother when I met Gaurav and had reservations about feeding my child packaged food. His proposition of selling preservative-free food appealed to me," says Seth.

"There is a lot more stickiness and that is showing in repeat orders, which are four-five times the first-time orders."

So, the trio decided to make food fresh and deliver it within 24 hours of online placement of the order. They decided to sell products such as cookies, cakes, jams, dips, snacks and ketchups that according to them were the biggest pain points in the packaged food segment. Cookies and dips, for instance, have a shelf life of 10-15 days, while jams and ketchups last for three months.

"We decided to build a city-level supply chain so that everything would be made in Mumbai and delivered in Mumbai," says Seth.

They also decided to work with local chefs instead of building a centralised kitchen. They roped in women who were already known in their localities for making preservative-free cakes, dips, snacks and sauces. The founders spent a good six months in getting chefs and product line in place and perfecting the tech platform. Yummade.in was launched in January this year.

In 10 months, Yummade has become a Rs 25 lakh company, says Tandon. It has over 300 stock-keeping units, or SKUs, and over 200 partner chefs. The customer base is more than 2,000. The offerings include over 150 jams, including a few exotic variants such as apple and whisky marmalade. The dips range from a regular hummus to a cranberry mustard dip.

The Yummade products are priced at Rs 250 on an average. Tandon admits he will never be able to match the prices offered by mass producers. Still, he says, the revenue is doubling every month.

"There is a lot more stickiness and that is showing in repeat orders, which are four-five times the first-time orders. If people order stuff worth Rs 400-500 the first time, they order things worth Rs 1,500-2,000 the next time," he says.

The trio is gung-ho about working with local chefs. This helps them eliminate the cost of building centralised production units and a product development centre and come up with more SKUs. "A product development cycle in a large organisation is 24 months. But at Yummade, many people are coming up with different kinds of jams and cookies. This increases the pace of innovation," says Tandon. Yummade launches at least two new products every day. 'It's a good attempt, but I am not sure that there will be a large market,' says Devendra Chawla, President (Foods), Future Group (Photo: Vivan Mehra)

After all, the biggest issue with achieving economies of scale in this business is ensuring centralised production and standardised products. Yummade has neither. If it forays into Delhi or Bangalore, it will have to build a separate community of chefs, which means standardisation will be difficult. "Yummade is a fabulous idea if it can be sustained," says Raghu Vishwanath, Managing Director of brand valuation company Vertebrand. He says since it is not a centralised model, the biggest challenge will be ensuring consistency. "I am not sure how scalable it will be since people make food their own way."

Tandon says they standardise recipes as far as possible. "For instance, in case of tomato ketchup, we call the chefs and tell them that this is recipe we are going to work with. Therefore, when we enter other markets, we will work with standard recipes." He agrees that certain products in other cities will be different from those in Mumbai, but says it is an advantage. "Our products are handcrafted. The tomato ketchup that you make will always be different what your mother makes, though the recipe may be the same. I think that's the beauty of the product. We look at it as an advantage, as when a product is handcrafted, there has to be a little difference. We have the processes to ensure that the recipe doesn't vary too much," he says.

Devendra Chawla, President (Foods), Future Group, who has advised food start-ups such as Hector Beverages (Paper Boat), says that offering just jams and dips may limit growth."When I buy into freshness, I want everything fresh from morning to evening, and not just jams and sauces. It's a good attempt, but I am not sure that there will be a large market." Chawla says premium pricing may also prevent Yummade from becoming a mass brand.

Though Tandon admits that pricing is an issue, he is putting together a strategy for bulk sourcing of ingredients to bring down costs. For now, he and his partners are anxiously waiting for a funding of $1 million, which they say will be spent on improving technology platform, supply chain and marketing.

Even though the industry is sceptical about the business model, the founders are confident that they will keep growing exponentially.

Small infra cos have prospered despite bad economic conditions