A look at sectors that will drive the start-up economy this year
By Goutam Das   Delhi     Print Edition: July 31, 2016 Anybody who attended the Start-up India launch in January this year would have felt the infectious energy at Vigyan Bhavan in New Delhi, where Prime Minister Narendra Modi announced an action plan. Hundreds of entrepreneurs and investors jostled with each other to find seats, loudly cheered every bit of the plan, and made overtly emotional speeches. Some said India's "start-up revolution was starting".

The fact is that the "revolution" is a few years old. Technology-driven start-ups had started disrupting every aspect of a consumer's life. In the process, India quickly scaled to become the third-largest start-up ecosystem in the world, after the United States and the United Kingdom, and ahead of Israel and China. It is also the fastest growing. According to product think tank iSpirt, India currently has 19,400 start-ups - the number of start-ups jumped 270 per cent in the past six years. They collectively raised $3.5 billion in funding in the first half of 2015 and $4.5 billion in the second half. Overall investment in start-ups in the past decade has crossed $50 billion. While the combined valuation of Indian start-ups hovers around $75 billion now, iSpirt believes that in 10 years, the start-up world would resemble "fireflies lighting up the sky!". There would be 100,000 start-ups, employing 3.5 million people, and with a market value of more than $500 billion.

There are multiple trends that would make this possible. The funding puzzle is looking better and even though big bang exits for investors are rarely heard about, a Nasscom report points to some encouraging numbers: the total number of active investors have grown by 2.3X from 220 in 2014 to 490 in 2015. Besides global investors such as Tiger Global, Sequoia Capital, Softbank, Warburg Princus and Alibaba, there are an increasing number of high net-worth individuals "considering start-ups as a viable investment option over other traditional investments such as gold, stock and real estate". More than 65 merger and acquisition deals in 2015, worth close to $800 million, have given some investors exit options.

Driving the start-up world in India are also a few mega-trends. Our conversations with industry watchers threw up five such sectors or trends that could see significant activity over the next few years: Businesses focused on non-metro consumers, software as a service (SaaS), fintech, healthtech, and edtech. There was a fair sprinkling of companies from these sectors in the 200-odd applications Business Today received for this edition of Coolest Start-ups. 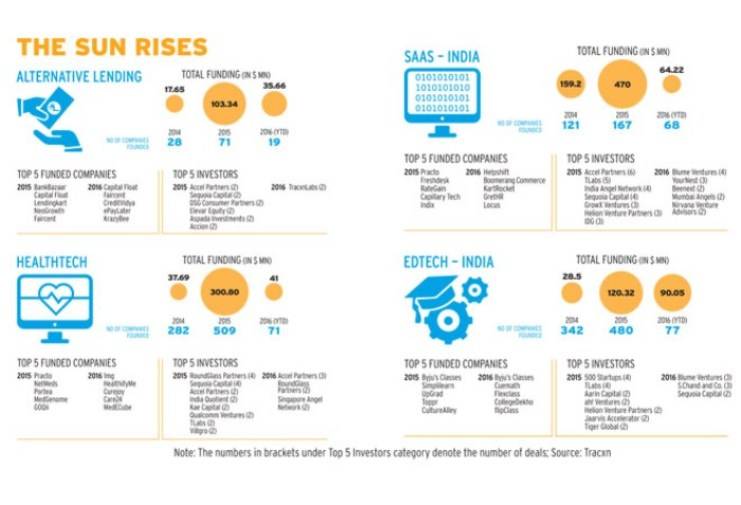 In Karwar, a town in the northern tip of coastal Karnataka, some fishermen take pictures of their daily catch through mobile phones and upload them on a WhatsApp group that has restaurant owners and chefs. The fish sells by the time they can reach the shore. 14-year- old Ritik, from Orchha in Madhya Pradesh, has used Google Translate to learn Spanish - his father owns a souvenir shop that gets foreign tourists. And A.K. Jain, Principal of the Government Higher Secondary School in Mandu, a village in Madhya Pradesh again, uses a GPS location-based e-attendance system to monitor his teachers.

Start-up NowFloats, which sells websites that can be updated by simply sending a message through its app, or an SMS, teamed up with a few other organisations for drives across the country, called 'Digital Desh'. Since May 2015, the company has been documenting how people beyond India's metros use their mobile phones. The instances above, just a few of the hundreds of stories the drives collected, underscored a mega-trend that could possibly drive many start-up companies going ahead: selling to non-metro consumers makes great business sense. "We are very clear now about customers from tier II and III towns," Founder and CEO of NowFloats Jasminder Singh Gulati says. In April 2014, when Business Today's Coolest Start-up edition featured them, the company had no plans to go to tier II and tier III. It had about 10,000 customers, in metros. Today, the company has some 250,000 customers in 25 towns and cities.

Not just NowFloats, there is a growing number of start-ups that subscribe to this philosophy. Indus OS, which started in October 2015, customised Android to develop a regional mobile operating system - one that is available in 12 Indian languages with regional keyboards, word prediction, swipe-to-text, text-to-speech and a dedicated app marketplace. Its OS is now available in 37 smartphones and the company has four million users.

According to Sharad Sharma, a founder of iSpirt, there is a downturn taking place among metro consumers. This is why e-commerce companies focused on cities are in a soup. "Those focused on 'Bharat' consumers can build very successful businesses with modest investments. There is a growth taking place in that market," he says. There are multiple factors driving the mega-trend.

"Already, there are successful companies (BharatMatrimony, Stayzilla, Dailyhunt are other examples). They act as motivators. Second, there is the adoption of the smartphone in middle India. Third is the formalisation of the Indian economy," Sharma explains.

Digital adoption could also drive other sectors of the Indian start-up ecosystem.

In March this year, Google and Accel came out with an India SaaS report - SaaS will likely grow to be a $10-billion industry in India by 2025 from under a billion dollars now. SaaS, globally, is shifting to mobile and India has an advantage being a mobile-first country.

The success of companies such as Zoho and Freshdesk has already established a powerful go-to-market model for Indian companies: selling software over the cloud that does not have have the costs associated with traditional software product selling such as packaging, distribution, and hiring of expensive sales force across the globe. Indian companies now indulge in selling from their desks. There are other success stories in this space - data visualisation company FusionCharts, workflow software company KissFlow, user engagement platform WebEngage, and recruiting software firm RecruiterBox among many others.

Business Today recently wrote about Freshdesk, which sells software that companies use to resolve consumer complaints. The company grew from four to 633 employees in six years, bought five companies. During its last funding round in April 2015, Freshdesk was valued at more than $500 million.

It could achieve all this because enterprise customers perhaps no longer want to buy custom applications. They want ready-made applications that are faster to deploy and where payments get converted to operational expenses (pay-as-you-go) versus the capital expenditure of traditional software.

It has been a year since we have been hearing a new battle cry from fintech companies: "War on cash". Growing e-commerce and the rise of smartphones have triggered the fintech opportunity, where digital transactions trump the physical. According to a report by Nasscom and KPMG, the transaction value for the Indian fintech sector is estimated to be approximately $33 billion in 2016. This is forecast to grow to $73 billion in 2020, a five-year CAGR of 22 per cent. Ask entrepreneurs, and they would say we are just scratching the surface.

"It is wild, wild, West in fintech right now," Upasana Taku, the co-founder of wallet company Mobikwik, says. "Fintech is less than 1 per cent of what it will be - which is why it is hot property."

Fintech is a small term that tries to capture a wide gamut: payments, banking, savings, lending and insurance, among others. Just the payments portion could be a $1.2-trillion opportunity in India, Taku estimates. "Of this, what is happening right now is cash. Whatever transactions are happening digitally are not even 5 per cent of overall payments," she says. That leaves enough headroom for digital wallet companies to disrupt. Similarly, India, with its young demographic, will borrow more going ahead for education and setting up of businesses or even working capital needs. Alternative lending start-ups are proliferating - amongst those who got funded this year thus far are Capital Float, Faircent, CreditVidya, and KrazyBee.

The year 2015 was remarkable for health-tech. In all, 509 companies were founded and as per data from Tracxn, total funding jumped nearly eight times to more than $300 million. Practo, NetMeds, Portea, MedGenome,and GOQii were among the top funded start-ups. The interest from both entrepreneurs and investors is because of sound reasons. The healthcare market, according to IBEF, is about $100 billion currently. It is projected to grow to $280 billion by 2020. But since India is a country with a very low doctor-to-patient ratio, tech-based start-ups are eyeing disrupting delivery.

"India being a self-pay market with very patchy access to healthcare services makes it a large opportunity for entrepreneurs to enter," says Meena Ganesh, MD and CEO of Portea, a company that brings medical care services home. "The large number of mobile users and the desire for Indians to self-diagnose and self-manage make it a market where use of technology can disrupt," she adds.

Ganesh, also part of this year's Coolest Start-ups jury, says there is a lot of demand that can be fulfilled by a combination of technology and services: Elder care and chronic disease management are areas where a combination of devices, doctors, and counsellors on call or chat as well as visit-based services help in providing a solution.

"The whole discovery of services which Practo had started is of course another area where there is a lot of interest," Ganesh says.

Like health-tech, this market is salivating too. According to some estimates, the market for online education is hovering around $20 billion now and could be worth double its current size by 2017. No doubt, the sector is seeing a rush of investments. According to data from Tracxn, total funding in edtech jumped from a paltry $28.5 million in 2014 to $120 million in 2015. There is a surge in entrepreneurs hoping to disrupt the market.

Ashvini Jakhar was a Lieutenant Commander in the Indian Navy and participated in 26/11 Mumbai anti-terrorist operations. When he decided to turn entrepreneur, he picked edtech - his company Prozo aids bulk purchases of books for retailers and distributors through its app.

"Because of our demographic dividend, more people are going in for higher education. At any point in time, the number of people looking for education is increasing in India. Even the average consumption of educational content by each individual is growing substantially," Jakhar says, explaining why edtech is a sunrise area.

There are content start-ups, such as publishers and coaching institutions, pure-play enablers who enable the content to be consumed in a better way by more number of people, and finally, distribution companies such as Prozo. Among this year's Coolest Start-ups applicants were Impartus, which provides a video-based learning platform that enables educational institutions to capture, edit, and distribute content, and Vedantu, a one-on-one live online tutoring platform with focus on grades 6th to 12th. The company says it has recorded more than 32,000 paid sessions.

We would see many more companies testing ideas, failing, pivoting, and succeeding in this sector, indeed in all the areas mentioned here, in 2016 and beyond.

How Hike has taken on global competitors