ABOUT: India's Green Revolution took place in the 1960s. The white revolution or Operation Flood - the exponential increase in dairy production - started in the 1970s, and ended in the 1990s.
By M.S. SWAMINATHAN | Print Edition: January 17, 2016 ABOUT: India's Green Revolution took place in the 1960s. The white revolution or Operation Flood - the exponential increase in dairy production - started in the 1970s, and ended in the 1990s. Since then, there has been only incremental thinking on the agricultural productivity front. And the biggest problem is that the bulk of the Indian farming community has not been able to escape the tyranny of monsoons. If the rains fail, so does our crops. How does one move beyond the over dependence on rains as many other countries have done? Professor M.S. Swaminathan, renowned geneticist and father of the Indian Green Revolution, shares his thoughts.

On the occasion of the 50th anniversary of our Republic, the then President K.R. Narayanan had identified two areas as the most significant achievements during 1950-2000. Strengthening the commitment to a democratic system of governance through elected Panchayati Raj institutions and other local bodies. Gender justice has been incorporated in the grassroot democratic institutions by first reserving 33 per cent seats for women and now 50 per cent. The second area highlighted by Narayanan was the achievement of the green revolution leading to self sufficiency in our food requirements. In the early 1960s, I had mentioned that a revolution in the yield potential of major food crops, such as wheat and rice, is an idea whose time had come. I, therefore, launched a research strategy involving changes in plant architecture and physiological rhythm. For achieving this, we had to initially import seeds of semi-dwarf varieties of wheat from Gonziro Inozuka of Japan and Norman Borlaug of Mexico. These varieties were capable of responding to good soil fertility and water management.

The idea of achieving a yield revolution through a revolution in plant type was put into practice intensively during 1963-68. As a result our farmers produced more wheat during 1964-68 than was possible during the preceding 4,000 years. This is why, William Gaud of the US had coined the term Green Revolution for indicating that we can, through green plants, achieve higher production through the productivity pathway. In the case of rice also, we first started the yield revolution with Indica-Japonica crosses. Soon this gave way to the use of semi-dwarf varieties of rice obtained from Taiwan and from the International Rice Research Institute in the Philippines. Thus, during the 1960s new opportunities were created for breaking the yield ceiling in wheat and rice and increase productivity per units of land and water. The significance of a productivity approach to agricultural self reliance will be clear from the fact that the world requires 50 per cent more rice in 2030 than in 2004 with approximately 30 per cent less arable land.

India is described as the country with the largest number of hungry people. Therefore, our government is told by foreign experts that we must give the highest priority to ending hunger and malnutrition. Both agrarian prosperity and national food security depend on the economics of farming.

Mainstreaming ecology in technology development and dissemination is the road to sustainable agriculture. The progress made by our country in food production, thanks to the green revolution symphony comprising farmers, scientists and policy makers, has probably no parallel in the world. We have now introduced a Food Security Act conferring the legal right to food to nearly 75 per cent of our population. Our Independence had as its backdrop the great Bengal Famine. We have thus moved away from famine to conferring the right to food with home-grown food. There is, however, no time to relax. The monsoon and the market are two of the major determinants of a farmers wellbeing. Monsoon behaviour is becoming erratic due to events associated with global warming. Similarly, market volatility often denies farmers the right price at the right time and place. But, how do we rescue the interests of our farmers from the vagaries of the monsoon and the market. This is the current challenge to scientists and policy makers.

2015 has been designated as the International Year of the Soil. 2016 is the International Year of Pulses. 2016 also marks the beginning of the UN sustainable development decade. Sustainable development goal No.2 calls for "end hunger, achieve food security and improved nutrition, and promote sustainable agriculture". As early as 1968, I had told the Indian Science Congress at Varanasi that: "Intensive cultivation of land without conservation of soil fertility and soil structure would lead to the springing up of deserts. Irrigation without arrangements for drainage would result in soils getting alkaline or saline. Indiscriminate use of pesticides, fungicides and herbicides could cause adverse changes in biological balance and lead to an increase in cancer and other diseases, through toxic residues present in grains or other edible parts. Unscientific tapping of underground water would lead to rapid exhaustion of this capital resource left to us through ages of natural farming. The rapid replacement of numerous locally adapted varieties with one or two high-yielding strains in large contiguous areas would result in the spread of serious diseases capable of wiping out entire crops, as happened prior to the Irish potato famine of 1845 and the Bengal rice famine of 1942. Therefore, the initiation of exploitative agriculture without a proper understanding of the various consequences of every one of the changes introduced into traditional agriculture and without first building up a proper scientific and training base to sustain it, may only lead us into an era of agricultural disaster in the long run, rather than to an era of agricultural prosperity." 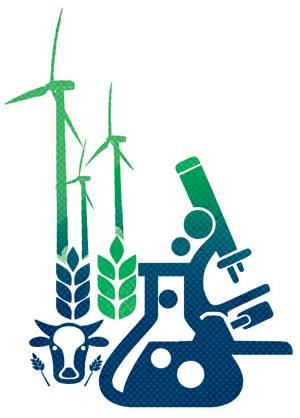 I, therefore, called for an evergreen revolution, which will lead to increase in productivity in perpetuity without associated ecological harm. The transition from green to evergreen revolution is the need of the hour. It will involve new science, such as production and application of biological software for sustainable agriculture, including biofertilisers, biopesticides, vermiculture, drip irrigation and soil health enhancement. In every block we should establish a soil health monitoring and enhancement centre that can help farmers to maintain high yield in perpetuity. President Obama also mentioned the importance of an evergreen revolution while addressing our Parliament: "Together, we can strengthen agriculture. Cooperation between Indian and American researchers and scientists sparked the Green Revolution. Today, India is a leader in using technology to empower farmers, who get free updates on market and weather conditions on their cell phones. And the US is a leader in agricultural productivity and research. As farmers face the effects of climate change and drought, we'll work together to spark a second, more sustainable evergreen revolution"

Evergreen revolution is the most appropriate idea for progress in agriculture and sustainable food and nutrition security for the next 25 years.

The World Trade Organisation (WTO ) is an inter-governmental body to promote free and fair trade. In developing principles for assessing what is fair and what is unfair, a global view is taken. This is where the problem arises. Agriculture is essentially a commercial occupation in developed countries where hardly 5 per cent of the population depend on agriculture for their livelihood. But in many development countries, including our own, agriculture is the principal occupation of a majority of rural families who depend on crop and animal husbandry, fisheries, forestry and agro-processing for both their livelihood and household food security. Also, the farm size is small and the marketable surplus is low. As a result, farm families require social protection. It is wrong to designate the limited support given to them as subsidy. It will be more appropriate to refer to the assistance given as support to sustainable farming.

India is described as the country with the largest number of hungry people. Therefore, our government is told by foreign experts that we must give the highest priority to ending hunger and malnutrition. Both agrarian prosperity and national food security depend on the economics of farming. We have now come to the stage of giving legal right to food through the National Food Security Act 2013. As mentioned earlier, India has evolved from a "ship-to-mouth existence to a right-to-food commitment. To fulfil this commitment, we have to give concurrent attention to production, procurement and public distribution. The difference between agriculture as a commercial occupation and agriculture as a means of abolishing hunger will have to be clearly understood at the 10th ministerial meeting of WTO in Nairobi this December. It is a matter of pride and satisfaction that the Union Minister for Commerce and Industry Nirmala Sitaraman has conveyed the message that support policies for food security and abolition of malnutrition are non-negotiable. The industrialised countries should understand and acknowledge the human dimensions of trade in foodgrain. Developed countries have safeguarded the extensive financial support they are giving to their farmers through the green box provision. It is high time that there is also a food security box which can help countries to adopt farm support policies that can help them to achieve the zero-hunger challenge launched by the UN Secretary General.

The Paris climate consensus essentially restores the status quo with reference to the implementation of the provisions of the 1992 framework convention. I am glad there is a commitment to limit temperature rise to 1.5 degree Celcius. Even this amount of increase will lead to the loss of 6-7 million tonnes of wheat in Punjab and Haryana. Countries in Northern latitudes will, however, benefit. I am happy that the principle of common but differentiated responsibilities has been reiterated. What is now urgently needed is the redoubling of our efforts in the area of both adaptation and mitigation. Agriculture adaptation will involve shifting our emphasis to per-day productivity of crops rather than per-crop productivity. There is also need for greater attention to reduce ammonia volatisation by replacing normal urea with neem-coated urea. Our food security can be safeguarded by promoting biogas plants, water harvesting ponds and planting of nitrogen-fixing trees in every farm. To honour our commitment to renewable energy and a low-carbon pathway of economic development, there is need for intensive attention to the R&D aspects of solar, nuclear, wind, biogas and biomass energy. This is the pathway to sustainable agriculture. Food is the first among the hierarchical needs of a human being. United Nations Development Programme's 2015 Human Development Report indicates that India ranks 130 out of 188 countries with reference to the Human Development Index. The greatest asset of a nation is its human endowment. Our first and foremost aim should be the provision of opportunities for a healthy and productive life for all. This should be the goal of the evergreen revolution which should incorporate the nutrition dimension. We should concurrently attack the problems of poverty induced undernutrition, protein hunger caused by inadequate consumption of pulses and hidden hunger caused by the poor intake of micronutrients such as iron, zinc, iodine, vitamin A and vitamin B12, etc.

It is high time that there is also a Food Security Box which can help countries to adopt farm support policies which can help them to achieve the zero-hunger challenge launched by the UN Secretary General.

Let me conclude with the statement based on President Roosevelt's remarks: New frontiers of the mind and technology are before us, and if they are pioneered with the same vision, boldness and drive with which the battle against food shortage was fought through the green revolution, we can achieve the goal of zero-hunger sooner than generally considered possible.

Ideas for the Budget of the Future

Innovations can jumpstart our manufacturing