Unswerving growth in loans, fee income and mobilisation of low-cost deposits propel Axis Bank to top our list of best banks once again.

Six years ago, Japanese process automation major, the KOSO Group, bought the control valves business of the ABB Group in India from a clutch of investors. The unit, located in Ambad in Jalna district of Maharashtra, was in a shambles. The small components manufacturer catering to the oil & gas and petrochemicals industry had no cash in the bank. Turnover was a meagre Rs5 crore. Customers were reluctant to stand by the unit - called Kent Introl - without the ABB brand.

What added to its woes was the sudden hostility from the banking partner. "This private sector bank was hell-bent on a personal guarantee from directors," reveals Gaurav Gupta, Managing Director at Kent Introl, who happened to be the only director based out of India.

"I would have given mine, but that was not enough," adds Gupta, who ran from one bank to another for a credit facility which the company needed urgently to restart the manufacturing unit. A visit to an Axis Bank branch in Nashik in 2005 - Axis was then known as UTI Bank - offered hope. That was also the time that the bank, headed by P.J. Nayak, was preparing to sharpen its focus on the small & medium enterprises or SME segment. The managers at Axis were quick to offer Gupta a blanket credit limit of Rs6 crore - without any personal guarantee. "The bonus was the flexibility to use Rs6 crore either as working capital or as an overdraft facility or as post-shipment credit," recalls Gupta. Another bonanza: an interest rate that was 1.5 per cent lower than what most other banks were quoting. 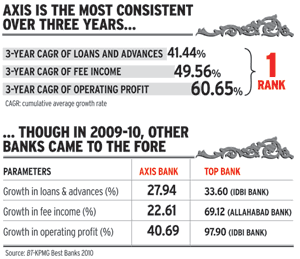 That loan from Axis brought Kent Introl back from the brink. Turnover crossed Rs50 crore in 2009-10, is expected to hit Rs70 crore by the end of this year, and the company is comfortably in the black. The turnaround in fortunes was noticed and, in a sharp contrast to the situation five years ago, Gupta was inundated with calls from bankers trying to peddle sundry products. But his company, which now has a requirement for a term loan of Rs15 crore, to partfinance an expansion, has little doubts on which bank's doors it will knock on. "We have grown with Axis. The bank is a good luck charm for us," says Gupta.

Like Kent Introl, there are many more small enterprises that have been able to scale up by availing of credit from Axis Bank. These include innovative ones, such as the Punebased sewer and garbage cleaning equipment manufacturer, Kam Avida Enviro Engineers. The Nashikbased United Heat Transfer that makes heat exchangers and pressure vessels used in industrial plants is another beneficiary of Axis Bank's thrust on SME lending.
TweetYoutube