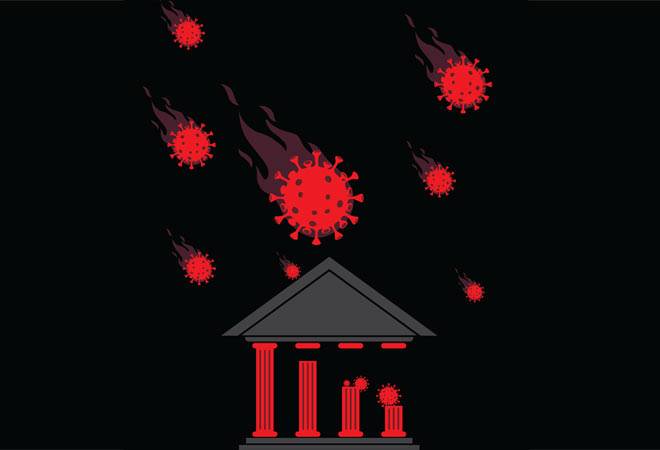 As many as five banks' capital adequacy could slip below the minimum 9 per cent level mandated by the Reserve Bank of India. Similarly, three banks' asset quality could get severely impacted if their top three large borrowers fail. That was the scenario painted by the RBI's extreme stress test in Indian banks in its financial stability report released three months ago.

Covid-19 has suddenly put the Rs 166 lakh crore industry in one such extreme stress test scenario. And the industry is not in the best of health. Two-thirds of the banks are in the midst of consolidation. Private sector banking, which has one-third market share in deposits and advances, is recovering from the failure of Yes Bank. Half a dozen banks have been tagged as weak and have restricted operations. With a low capital base and gross NPAs close to 10 per cent, banking had just turned around its operations this year.

The 21-days lockdown has opened up a new war front for banking. Not only does it have to do all the heavy lifting to support the Covid-19-impacted economy, it has to protect its own vulnerable balance sheet.

Among the measures that RBI recently announced is additional liquidity of Rs 3.74 lakh crore to counter possible risks to the organised sector. "That should help financial institutions and flow of funds to the real economy," says Shanti Ekambaram, Group President (Consumer Banking), Kotak Mahindra Bank. Easier said than done. For quite a few years, credit off-take has been in single digits despite adequate liquidity. In a low demand scenario, banks have to devise new ways to improve credit off-take. For the past 6-7 years, retail credit, especially personal loans and credit cards, has been fuelling growth. So the 21-day lockdown and supply chain disruptions could play spoilsport.

Another lurking issue is of inflationary pressure. RBI measures will create a surfeit of liquidity, which would be in addition to global liquidity. Many central banks are pumping in trillions of dollars, which will find their way into emerging markets like India. Excess liquidity will fuel inflation and push up interest rates, thereby impacting growth. The massive 75 basis point-cut by RBI, bringing the repo rate down to 4.4 per cent, comes at a time when retail inflation is elevated at 6.58 per cent.

While the economy needs lower interest rates and adequate liquidity to avoid falling into recession, RBI has to find the right balance and use all tools available to absorb excess liquidity, contain inflation and avoid any depreciation in the currency.

Rajnish Kumar, Chairman, State Bank of India, has said that these moratorium measures will not have any impact on the bank's profitability, though experts say it will impact banks in the short run.

The RBI's three-month moratorium and the government's recent announcement of increasing the minimum default limit that triggers bankruptcy from Rs 1 lakh to Rs 1 crore will go a long way in helping the industry. The pain for many companies is not going to get resolved in the next 3-6 months. Manish Aggarwal, Partner at KPMG, says there is also an urgent need to facilitate large-scale restructuring and to avoid insolvencies. "Stopping the insolvency process is necessary but not a sufficient condition to address the fundamental issue," he adds. It may be time to revisit some of the old loan restructuring schemes like converting a part of unsustainable debt into equity.

A point that needs immediate attention is that Indian banks, especially public sector banks (PSBs), are undercapitalised. Any lending by a bank has to be backed by a minimum capital ratio of 9 per cent. So, the government has to pump in more capital into banks if lending has to go up. The RBI could help by relaxing some of the risk weights for different assets, which will save some capital allocation. For example, the risk weight for consumer credit, including personal loans, is currently 100 per cent. This mean banks have to keep aside Rs 9 (minimum capital adequacy) from capital for every Rs 100 given as personal loan.

Similarly, SBI, ICICI Bank and HDFC Bank are identified as important banks, which means they need to keep higher levels of capital and capital buffers. Any relaxation in these ratios would provide more ammunition to banks in terms of capital to support the industry.

Without delay, the banking sector should hit the ground running on framing board policies, as directed by the RBI, to provide relief to companies as well as individuals. The immediate need of the corporate sector would be working capital to restart business. Banks should start recalculating the drawing powers of each company in stressed sectors. The benefit of lower interest rate should be transmitted faster to companies as their top line would be under stress for at least 3-6 months. Many banks are not keen to announce repo linked MSME loans, as RBI had advised. But it is in their interest to immediately offer the benefit of lower rates on working capital because if businesses fail, it will have a cascading effect on banks.

While RBI guidelines says the accumulated interest should be recovered immediately after the three-month moratorium period, but in reality, this would be difficult. The accumulated burden should be shifted to the remaining nine months of the fiscal to reduce burden on the corporate sector.

Learning from the Crisis

The biggest lesson from the financial crisis caused by the pandemic is that the country needs a strong balance sheet to withstand such events. India's fiscal deficit has been 3.3 per cent-plus level in the last six years despite having an oil advantage. As a result, today, the government's ability to pump in more money into the economy, without impacting its credit rating, currency and inflation, is highly constrained. The fiscal deficit was 2.5 per cent of GDP in FY08, a year before the global financial meltdown. India was able to pump in a big stimulus, which eventually pushed the fiscal deficit to 6 per cent in FY09 and 6.5 per cent in FY10.

Second, the government and RBI should have calibrated their policies or structural changes. Bunching together things like asset quality review, bankruptcy code, consolidation has left banks with no breathing space.

Third, the government needs to act swiftly by pumping in capital to protect the banking sector. No lessons have been learnt from the IL&FS crisis - the institution was left to collapse despite having LIC and SBI as key shareholders. Action on the Yes Bank issue was also belated.

Lastly, RBI has to be vigilant about developments in the financial market. The stock market crashed over 40 per cent in just a few days. Rupee's value against the US dollar has depreciated by over 5 per cent in just three months. Foreign investors have withdrawn over Rs 85,000 crore from equity and debt markets in three months. Events unfolding due to Covid-19 could disrupt India's financial stability. It is time to be quick on the feet because Covid-19's damage will be huge - on the economy in general and the industry in particular.