Banking in a global marketplace

The Indian banking system will have to deal with mind-boggling paradigm shifts in a complex global environment in the years ahead.

With yet another year of high economic growth, the Indian economy continues on a sustained upwards trajectory. The GDP growth has averaged 8 per cent over the past four years, determined by three key macroeconomic factors: 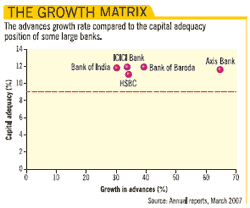 The expected impetus to the infrastructure segment is likely to further broadbase the economic growth in the years to come. The development of the debt market and the role of financial intermediaries in routing national savings to fund the massive requirements of the infrastructure segment will play a critical role in sustaining the growth momentum.

The underlying structural, demographic and economic changes have put India on the global map as one of the fastest growing economies.

The relatively slower pace of growth in the developed world and increasing de-coupling of the emerging economies is expected to alter the world economic order in less than two decades. While some banks have aggressively focussed on pure growth to create size and mass, others have focussed on the quality of growth. These widely divergent strategic approaches are likely to establish leadership positions for the future.

While growth brings great opportunities, it also creates significant new challenges for the Indian banking system—challenges that, we believe, have the potential to fundamentally change the structure of the indian financial services industry, particularly banking.

Banks are guzzlers of capital. In many ways, for banks, capital is not just a source of funds, but an enabler for growth. A study of the advances growth visà-vis the capital adequacy reflects a requirement for larger infusions of capital at shorter time frequencies in order to sustain the growth momentum (See The Growth Matrix).

The capital requirement figures are staggering compared to the capital these banks have raised in the past. Given the requirements, there is also the likelihood of banks overcrowding the capital markets with public offers.

The weaker banks, in order to attract capital and sustain growth, may have to undertake rapid restructuring across their operating models, asset portfolios, technology architectures, as well as development of human resource competencies. As the market for hybrid instruments is not well developed, equity instruments will be the preferred route for the banking system to raise capital. Indian banks may have to take a cue from their Chinese counterparts—who have raised $37 billion (Rs 1.48 lakh crore) of capital over the past two years (the Industrial and Commercial Bank of China raised $19 billion, or Rs 76,000 crore, in October 2006 through a single issue)— to actively tap the global markets to raise resources.

The success of Indian banks in raising capital from the global markets is expected to be driven by the larger Indian growth story and may potentially require a structural change in the shareholding pattern.

The expected deregulation in the financial services landscape after 2009, the high valuations in the capital markets, and high growth rates in retail financing and product distribution have attracted a number of players, both global and domestic. The new entrants are taking the non-banking finance company route to create financial services plays. With redefined business models, these players are likely to shape the future of financial services and banking. With segmented customer models, wide distribution reach, lean operating structures, and a targeted set of product propositions— funded by capital raised through private equity— the new players are targeting new pockets of profitable and affluent customers. Traditional Indian banks are being severely challenged in attracting and retaining profitable customers, in the face of this onslaught (See The New Models).

Banks that are unable to reorient themselves and attract and retain profitable customers are likely to see their returns (RoA) under pressure, despite the growth in business. A study of the growth in advances versus RoA reveals that while most banks have shown growth over the last two-to-three years, this has not necessarily translated into improved returns for stakeholders (See How They Fared).

Banks that are able to realign their business and operating models in terms of distribution reach, competitive and value-added product offerings and differentiated customer services are likely to be successful in protecting their turfs and in retaining and attracting profitable customers.

These banks are likely to achieve healthy growth, in terms of composition of income (fee income versus funds-based income), and improved returns—RoA; RoCE; and RoE (See Profitable Growth).

To meet the challenge emerging from the convergence in the financial services sector, banks will have to: 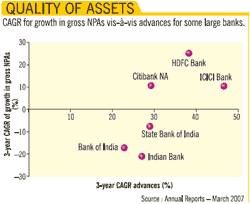 Management of liabilities is a critical driver for growth. Banks that are able to attract low-cost deposits and maintain overall lower cost of borrowings will have the flexibility to define their asset books and, thereby, attract new customers. A study of the gains or losses in market share of low-cost borrowings reveals that the private banks are gaining incremental market share at the expense of public sector banks (See The Big Picture). 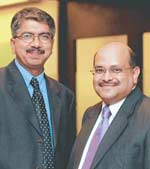 Aggarwal (R) and Trivedy
Banks that are able to move up the value chain and bundle CASA (Current Account and Savings Account) accounts (a source of low-cost deposits) along with value-added products and services will most likely be able to maintain and consistently raise low-cost deposits. This will mean moving into non-traditional banking areas. It may, however, be pertinent to point out that moving up the value chain is a difficult proposition and a number of banks will find their ability to do so being constrained by:

Asset quality and impact of the SARFESI Act

Non-performing assets (NPAs) are a double-edged sword that affects income recognition, while the provisioning on the NPAs impacts the profitability and earnings of banks. The study reflects critical trends with regard to improvements in NPAs (See Quality of Assets).

Traditionally, a large chunk of NPAs in the banking system have been with regard to corporate exposures. Public sector banks, in particular, were saddled with bad corporate exposures. The last three years have seen a significant improvement in the NPAs of PSU banks, with gross NPAs as a proportion of total advances show a declining trend. Significant improvement in NPAs and recoveries can be attributed to:

Some of the smaller banks, particularly those classified as “weak banks”, have also benefited significantly from the environmental changes. The improved position of the NPAs has been one of the key reasons for the turnaround of these banks.

However, the aggressive growth in retail assets and, specifically, non-collateralised assets like credit cards and personal loans over the last two-to-three years is likely to present a new challenge to the banking system. The first signs of recovery weakness in retail exposures are clearly on the horizon. Given the challenges in the retail recovery framework, the banking system will have to look beyond. Strengthening the loan origination framework and ensuring generation of healthy credit will be critical for a healthy retail portfolio. The banking system critically needs systemic initiatives with regards to:

Conclusion
We believe that each of the trends highlighted above will individually, and in tandem, shape the future and rewrite the rules of the Indian banking landscape. Banks that are able to innovate to keep up with emerging market trends are likely to be more successful and will establish longterm leadership positions. The fun is about to start.