Performance-linked compensation is a significant step for an old private sector bank to achieve - not because it is rocket science but because it calls for reorienting employee mindsets to the new realities of the marketplace. Some of India's oldest banks are thus beefing up their top brass with MNC talent in a bid to stay competitive.

As many as 1,300 employees of Dhanlaxmi Bank, an 83-year-old private sector bank headquartered in Thrissur, Kerala, were pleasantly surprised in November 2008. In his first meeting with trade unions, with HR Head-designate Manish Kumar by his side, new Managing Director and CEO Amitabh Chaturvedi offered a 15 to 25 per cent raise in salaries.

In return, he wanted an assurance the team would work harder to make Dhanlaxmi one of the top five private banks in five years. The employees suspected a hidden agenda - until they actually got their hikes. They now have a two-part pay, fixed and variable, with the latter linked to individual performance. The initiative has led to some results. In three years, the bank's business has soared from Rs6,000 crore to Rs17,000 crore; and the employee headcount to 4,500 people.

"We followed the practice that multinational corporations, or MNCs, first started and was then picked up by everybody else," says Kumar, since christened Chief People Manager. The move, he explains, was initiated because the top brass were convinced that their staff was underpaid, and it would make more economic sense to hike their pay than get people from the outside. 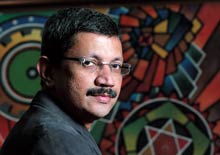 P.R. Somasundaram
Kumar's past association with MNCs such as Mannesmann-Demag AG, Germany, and Kodak India has helped him explore innovations in the bank's HR practices. The split pay structure, CEO Chaturvedi says, has led to some employees on occasion taking home double their earlier pay.

Performance-linked compensation is a significant step for an old private sector bank to achieve - not because it is rocket science but because it calls for reorienting employee mindsets to the new realities of the marketplace. And it is not just at Dhanlaxmi that such change, prompted by the induction of new and dynamic managers, is taking place. At the 84-year-old Lakshmi Vilas Bank in Karur, Tamil Nadu, the management is introducing an employee stock ownership plan, or ESOP.

"We will operationalise it soon to bring about a performance-driven culture. We are trying to tell our colleagues at all levels that security of job lies in the success of the bank,'' says P.R. Somasundaram, MD and CEO, who has worked for 25 years in Standard Chartered and Unilever. He joined the Tamil Nadu-based bank, founded by the local Vysya community leaders, with the clear-cut mandate for modernising it. "In a competitive market, aggression is important, and the challenge before me is to drive a sense of aggression in employees,'' he says, adding that the unions have been supportive of the management's desire for a change.

With more and more young executives from leading MNCs walking into old-generation private sector banks, the promoters are beginning to hear a language spoken in multinational boardrooms. The days of anointing retired public sector bank employees as CEOs are long gone. In the 1990s, it was the new private sector banks that ushered in MNC talent - ex-Citibanker Aditya Puri set out to start HDFC Bank and later Bhaskar Ghose, who was the Country Head for Bank of New York, came on board at the Hindujaowned IndusInd Bank. Now it is the turn of the traditional private banks to realise that if they have to survive, they need to infuse young blood and fresh ideas. The general consensus is traditional banks lag mostly in technology, HR practices and products.
TweetYoutube

A tale of derring duo