India has underplayed its strengths in several key sectors that could potentially be game-changers for the country.
Barnik C. Maitra & Adil Zainulbhai | Print Edition: Jan 19, 2014 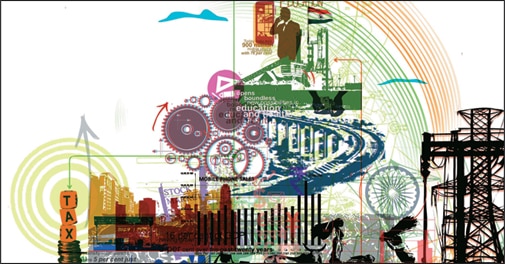 Barnik C. Maitra & Adil Zainulbhai
The frenzied optimism of the past decade has given way to despair and disappointment among observers of India, both local and foreign. The burst of economic liberalisation of the 1990s and growth in the first decade of this century has given way to slowdown, deadlock and complacency. As a result, there has been mounting frustration that India's promise may be fading. Many now question the ability of 1.2 billion people to work together to mobilise change at an adequate pace to bring about inclusive development and socio-economic transformation needed to revive India's growth story.

There is no doubt that India has made economic and social progress since 1947. The most significant aspect of this has been the growing aspirational levels of Indians and the creation of an inclusive nation state. At the same time, however, India's socio-economic and infrastructure challenges, both physical and intellectual, are substantial and real. In McKinsey & Company's new book, Reimagining India, noted public policy expert Kishore Mahbubani wryly observes, "India has a wonderfully open society - but as a nation a very closed mind. It continues to be nearly impossible to challenge conventional wisdom and sacred cows, particularly economic ones."

Like him, many other contributors to the book argue that in order for India to transform into a global superpower, the act of reimagination - whether radical or subtle - will be vital. India has underplayed its strengths in several key sectors that could potentially be game-changers for the country.

Agricultural Powerhouse?
Although a majority of Indians live in rural areas, agriculture accounts for only 16 per cent of GDP, having grown at a paltry three per cent over the past 20 years. Despite being self-sufficient in foodgrain since the mid-1990s and being the world's third largest agricultural producer (behind China and the US), Indian agriculture is far from realising its true potential. In the years to come, India is set to increase its overall food consumption by four per cent annually with food expenditure more than doubling from $245 billion in 2010 to potentially $510 billion in 2030.

The growth in demand creates opportunities to double farmer incomes and impetus for India to produce and export high-value produce (fruits, vegetables). It can make the country a top exporter of agricultural produce. However, a dramatic reimagination is needed to ensure modern farming technologies, high quality of seeds and small scale mechanisation. At the same time, the government could consider different structural measures to build an infrastructural backbone (through an authority similar to the National Highways Authority of India), processing centres, world class agriculture research universities, and an open participative extension service network.

New Industrial Clusters
Manufacturing accounts for only 16 percent of India's GDP, at least nine percentage points below where it should be at India's current stage of economic development. Estimates show that India needs 135 million new non-farm jobs in the next decade in labour-intensive sectors such as manufacturing, construction, and retail. The key is to put the essentials in place, such as infrastructure, rational taxation, and reducing bureaucracy. For example, a chemicals cluster will require the right tax structure for feedstock and products, along with efficient ports and reliable power, and a food processing cluster will require infrastructure and transport linkages to the farm-gate and big consumption centres. The real test for India will be to build 100 such clusters at scale. An ambitious plan of creating 100 to 150 new industrial cluster cities along big industrial corridors, similar to the Delhi-Mumbai Industrial Corridor, with the right infrastructure and transport linkages, a favourable policy and tax regime and participative land acquisition frameworks could create up to several million new jobs.

Education and Health-care
India's literacy rate is only 74 per cent and only one in five people in the country has access to basic sanitation. Even more grave is the figure of underweight children under five years old in India. It is 42 per cent, the second-highest in the world. In fact, the biggest failure of the Indian state is seen to be its inability to meet basic human needs, partly due to the scale of the challenge of building brick-and-mortar health care and education infrastructure. And yet, today, India stands at the threshold of one of its biggest transformations - scaling up health-care and education using readily available technology and frugal innovation.

India has the opportunity to build an effective education and health-care system, using technology at scale, and delivering the same level of quality as developed market services, but at as little as a tenth of the cost of deployment. At the same time, with the right funding and societal support, India's growing pool of committed social entrepreneurs could help address some of the toughest education and health-care challenges facing the country and the rest of the emerging world. In Reimagining India, Bharti Enterprises founder Sunil Mittal writes that the fact that three-quarter of new Internet users in India will be accessing it solely through mobile handsets or tablets "opens boundless new possibilities in education and health."

The challenge of implementing any bold vision or idea can be an onerous undertaking. However, several success stories in India, such as the technology driven green revolution, and more recently, the mobile phone revolution, have shown us that sweeping change can take place in a single generation.

In Reimagining India, both Morgan Stanley's emerging markets expert, Ruchir Sharma, and industrialist Anand Mahindra argue that India's states, when given the power to pursue their own economic growth and policy plans, could encourage inter-state competition for human and economic capital and provide the much-needed impetus for growth in the country. Sharma writes, " In an increasingly federal nation, the dynamism of the state leaders is countering the ineffectiveness of the centre." Mahindra concurs, saying, "The best way to propel the economy may be to encourage different parts of the country to go their own way."

Mobilise the Masses
An essay in Reimagining India by Bill Gates serves as a profound testimony to the power of empowering and mobilising masses of people for change. He writes about India's success in winning the war against polio - an amazing feat achieved by enlisting 2 million polio vaccinators and the support of the full sweep of Indian society. With the same inclusive model, Gates writes, India can provide the most vulnerable sections of its community other vaccines, clean water, education, advice on maternal and child health, and support for agriculture. By encouraging greater participation from every section of society, especially women and marginalised castes and classes, and creating coalitions of different stakeholders such as businesses and youth who work in the social sector, India could see a wave of transformation and new ideas that are needed to bring about change.

Leapfrog with Technology
Technology and innovation are at the core of India's success in business, both at home and abroad. Today, India has 900 million mobile phone subscribers with 76 per cent teledensity - compared to a mere 5 per cent just 14 years ago. And the technology and business process outsourcing industry has also proven that Indian companies can drive world-class innovation and business transformation at scale. However, there is still much more scope for innovation in India today.

By encouraging greater participation from every section of society ... India could see a wave of transformation and new ideas needed to bring about change

In Reimagining India, venture capitalist Vinod Khosla writes about how India could employ a "leapfrog mentality" to find unique new pathways to a better future. In fact, the use of technology and the internet could circumvent the need for brick-and-mortar schools and colleges by ensuring access to self-paced learning for students, potentially meeting India's education challenges at a fraction of the cost of traditional approaches.

As is so often the case in India, its potential is enormous and so are its challenges. The silver lining - according to Reimagining India's 65 global thinkers in business, academia, policy, and culture - is that India does not need a fundamental, systemic overhaul to realise its potential. As experience shows, progress may be fitful, but when India's people can imagine, mobilise, and implement, 10 years can change almost anything.