With global markets losing between a fifth and, in some cases, close to half of their value, fear, pessimism and panic grip the Street.

Wednesday, March 29, 2006 was a momentous day on Dalal Street. In the course of trading on the Bombay Stock Exchange (BSE), the benchmark index, the Sensex, for the first time ever, overtook its counterpart on Wall Street, the Dow Jones Industrial Average. When the 30-share Indian index hit 11,157, it went past the 11,154 that the Dow had closed at the previous day. The two indices are strictly not comparable—for instance, the value of the stocks that make up the Dow is $2.68 trillion (129 lakh crore), against $325 billion (Rs 15.6 lakh crore) for the 30-Sensex stocks. But the Sensex going one up on the Dow was a major shot in the arm of traders who thrive on sentiment, and little else. Perhaps it was also another sign of the beginning of a shift in economic power—the Sensex, after all, was offering annual returns of around 75 per cent; the Dow for its part was inching ahead in single digits. Click here to Enlarge
In the days ahead the Sensex duly stole the thunder, eventually scaling an alltime high of 21,207, some 7,300 points clear of the Dow’s peak. Last fortnight, it was once again time for the Dow and the Sensex to play hide and seek. The only difference? This time, two indices were scurrying for cover on the downside.

The Dow eventually plunged lower, to 8,451 at the time of writing, although the Sensex’s plunge in percentage terms ever since the Wall Street crisis exploded in end-August, isn’t too far off that of the Dow. As Business Today went to press, the Sensex, the Dow and, indeed, every major global index was in free-fall mode. A sharp recovery on 13th October, when the Sensex regained 7.7 per cent on the back of a revival in other Asian markets and the Indian government’s plans to infuse liquidity into the banking system, may prove to be just short-term relief. Traders describe such relief rallies as a “dead-cat bounce”; the bear is here to stay for some time to come, they aver.

Last fortnight’s rampant selling in equities across the globe was a direct fallout of the drying up of liquidity in the global financial system. No remedy proved good enough—a $700-billion bailout by the US administration; a coordinated effort by central banks across the world to pump money into the system; and back home, the Reserve Bank’s 150 basis points cut in the cash reserve ratio (CRR), which would release Rs 60,000 crore, wasn’t enough to stop the selling spree. 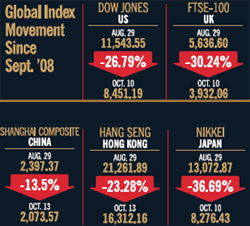 Click here to Enlarge
Even the staunchest supporters of the India growth story had to change their stance when the Sensex came crashing down by 50 per cent from its peak. This wasn’t a correction any more. After five years of a no-holds-barred bull run, during which the Sensex appreciated seven times, Dalal Street has begun to reconcile itself with the reality of a long-drawn-out bear market. If you consider the drop from 21,207, the bear market is already nine months long, although it made itself visible only last fortnight when the markets shaved off roughly half of its gains since January. “The bull market is over, and the bear market has started,” declares Nilesh Shah, Managing Director & Chief Executive Officer, Envision Capital Advisors.

Rohit Kothari
Clearly, what’s dragging the markets down is the heavy selling by foreign institutional investors (FIIs), who could do with every dollar they can lay their hands on at a time when liquidity has all but evaporated. Since the beginning of the year, FIIs have till date sold shares worth $10 billion— a far cry from the inflows of $17.23 billion and $8 billion seen in 2007 and 2006, respectively. 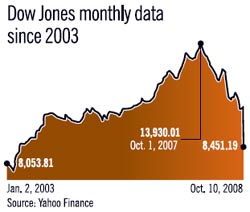 Click here to Enlarge
“It is very difficult to say whether the worst is over for the stock market. It is more of a crisis sentiment,” says Puneet Nanda, Chief Investment Officer, ICICI Prudential Life Insurance, who manages Rs 28,000 crore, of funds of which Rs 18-20,000 crore is in equity. Moreover, Vikram Kotak, Chief Investment Officer of Birla Sunlife Life Insurance, says: “Correction in equity market has been sizeable. Further, fresh inflows will be harder to come by in near term, which would have an impact on investment and ultimately growth.”

Nilesh Shah
Nanda of ICICI Prudential says people are behaving irrationally at the moment, even though valuations are at attractive levels. After all, the BSE Sensex is trading at a mouth-watering price-earning ratio of 11 times based on 2008-09 earnings. Couple that with the relatively sound fundamentals of the Indian economy, with around 7.4 per cent growth looking doable (despite the recent slump in industrial production), and you’re tempted to ask: Why is everybody reaching for the sell trigger?

The answer doesn’t lie with juicy valuations but with sentiment —along with liquidity, the bullish mood has also taken flight from the markets. Envision’s Shah, who manages around Rs 500 crore of funds, says the worst is not over as the crash was brutally swift. Bear markets tend to last for between two and four years. For example, the last bear market in India lasted four years (between 2000 and 2003).

Past history indicates that the beginnings of a bear market usually follow on the heels of a large-scale mobilisation in the primary market— in 1992, after UTI Mastergain mopped up Rs 4,700 crore. Two years later in 1994, after Morgan Stanley Growth Fund raised a record Rs 981 crore, the markets promptly tanked. In 2000, the downslide began after Alliance Millennium Fund gathered Rs 540 crore; the recent bear phase coincides with Reliance Power’s initial public offering pocketing all of Rs 11,700 crore. What is common in all these events is that BSE Sensex hit a new high somewhere close to the time of launch of these issues, only to crash subsequently. The bear market is confirmed once two things happen: the primary market peters out; and mutual fund investors slip into redemption mode. At the time of writing, the IPO market looked virtually extinct. The fall in Indian markets may seem irrational in isolation, but then markets don’t operate in isolation—not any longer. One indicator that things will only get worse before they get better is the recessionary conditions that will spread as a result of the global crunch in credit. The US, for instance, is set for a recession as unemployment increases, and consumers cut back on spending and borrowing. A recent Global Financial Stability Report of the International Monetary Fund (IMF) reveals that world economic growth is headed for a “major downturn” in 2009. Many advanced economies are close to a recession, and emerging economies are slowing rapidly.

Against such a scenario, predicting a bottom for the Indian markets can prove a treacherous exercise. “We are nearing the bottom, there may be another 10 per cent fall (from 11,000), but I do not see prices going down more than this,” says Rohit Kothari, Director, Antique Finance, a stock broking and investment banking firm. Even if the markets do bottom out any time soon, sluggish conditions will prevail for another 9-12 months.

Technical analysts, too, have turned bearish. One reason for that is the formation of a headand-shoulder pattern, a classical indicator of a shift from a bull to a bear market (an inverted headand-shoulder is a bullish indicator). “A bearish head-and-shoulder pattern is still well intact; this could bring down Sensex to around 9,200,” says V.K. Sharma, Director, Anagram Capital. So, how should one play the market in such uncertain times (that is, if one is brave enough to do so)? “One should look for cash-generating companies that are expanding based on their own funds,” says Harshad Patwardhan, Investment Manager (Equity), JP Morgan Asset Management India. He says in the current environment one should stay away from companies that require equity or debt funds for their expansion (see The Slowdown-proof Stocks, Pg 128). Similarly, there is big concern over the future outlook of companies relying on exports, especially to US. Some of the sectors in this list include software, auto components and textiles. But the biggest concern has to do with the top four IT services players—Infosys, Satyam Computer, TCS and Wipro—which are a part of the Sensex and Nifty. “Most of the IT companies will be severely affected by the US and European financial crisis.

Harshad Patwardhan
Around 30 per cent of their business comes from the BFSI (banking, financial services & insurance) segment, where there is a freeze or decrease in IT budgets,” says Kothari of Antique. The slowdown in IT will have repercussions on the real estate sector, which is already facing a slowdown. After all, the IT and ITenabled services sectors generate the most demand in the property market. What’s more, there is also a fear of corporate earnings being further downgraded in the wake of a recession in the US. “There is still a possibility of downgrading of earnings,” says Patwardhan of JP Morgan.

Amidst so much gloom, the slivers of good tidings, like lower oil and commodity prices as well as moderating inflation, are getting obscured. Inflation, which is hovering around 12 per cent, may start easing in the next couple of months.

Puneet Nanda
This, in turn, could tempt regulators to go easy on interest rates. “Crude at $75 a barrel, and increased gas availability from the Krishna-Godavari basin (where Reliance Industries is readying to begin production) will collectively bring down India’s import bill by almost $50 billion,” says Antique’s Kothari.

Another tender mercy is that the slowdown in corporate earnings has already been factored into stock prices. “Profit growth of 8-9 per cent is there in the price (of stocks). Anything above that will be a positive,” says Nanda of ICICI Prudential Life Insurance. Also, even if the Indian economy slows down to below 7 per cent, it would still be much higher than global economic growth. “Once the dust settles, people across the world will look at India as a resilient growth market,” says Shah of Envision. The big question, though, is how long will it take for that dust to settle.

So, where is the money?