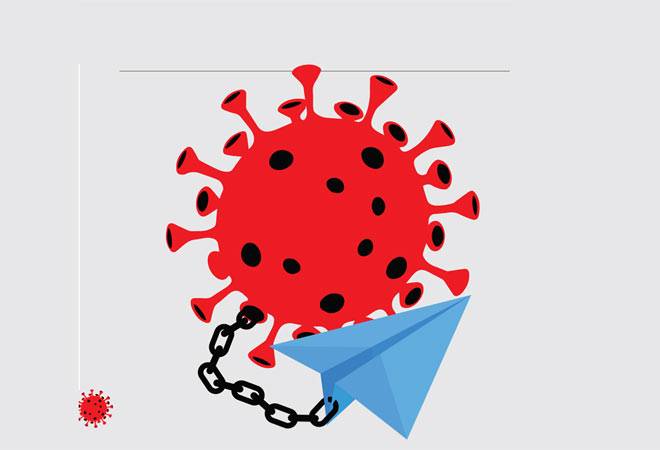 Just last month, at an event in New Delhi, Aviation Minister Hardeep Singh Puri was fairly confident about selling 100 per cent stake in Air India. While distributing the "letters of appreciation" issued by Prime Minister Narendra Modi to Air India staff for evacuation of Indians from China's Wuhan city, the minister said there would be no problem in Air India's disinvestment this time. In January, the government had floated a sale document for the national carrier, its second such attempt in less than two years, as the last effort had failed to receive any response. Little did the minister know that a country-specific disease (at that time) would grow so big to not just potentially derail Air India's disinvestment but also put the domestic and international aviation sector on a ventilator.

The government's decision to suspend all commercial and chartered flights for 21 days till April 14 due to coronavirus threat has led to grounding of nearly 1,040 aircraft (including helicopters) and cancellation of thousands of flights within India and overseas. While airlines are not sure if the suspension will extend beyond April 14, they are bracing for tough times ahead. The cost of groundings is expected to be up to $3.6 billion (Rs 27,090 crore) in just one quarter, as per aviation industry consultancy CAPA. This includes $1.75 billion losses for airlines, up to $1.75 billion for airports and concessionaires, and up to $90 million for ground handlers. If the shutdown continues for three months, IndiGo and SpiceJet alone may report combined losses of up to $1.5 billion (Rs 11,288 crore) in March and June quarters, says CAPA.

"The April-June quarter, one of the stronger quarters of the year for Indian airlines, is increasingly looking like a washout. This will have consequent implications for second quarter of 2020/21 (usually the weakest quarter) and for the rest of 2020/21," says a CAPA report. "Historically, airlines in India (even globally) have been vulnerable to rise in crude oil prices. Whenever ATF (aviation turbine fuel) prices go up, airlines start bleeding. It's hard to imagine their plight in a situation like this," says an aviation analyst.

Even as CAPA's projections are based on analysis for three months, some believe the crisis will last for a longer period. "It will take at least nine months to recover from this. We don't know the bottom yet," says Mark Martin, Founder, Martin Consulting.

Losses of such magnitude could not just wipe out cash reserves of domestic airlines, they could create existential crisis for them. IndiGo, for instance, had free cash reserves of Rs 9,412.8 crore as on December 2019, which most experts are expecting will get wiped out in a matter of months since a huge chunk of the airline's costs are fixed, including payroll expenses and aircraft leases.

IndiGo has a fleet of 261 planes, most of them on lease. "For some airlines, paying monthly lease rentals will become challenging. It's not clear yet if airlines have force majeure clause in their lease contracts, which can give them some relief from making these payments," says Kinjal Shah, Vice President and Co-head, Corporate Sector Ratings, ICRA.

To control costs when there are no revenues, three domestic airlines - Air India, IndiGo and GoAir - have announced salary cuts of late. Others may follow. "With great deal of reluctance and deep sense of regret, we are instituting pay cuts for all employees... starting April 1, 2020. I am personally taking a 25 per cent pay cut... vice presidents and pilots are to take a pay cut of 15 per cent, while salaries of cabin crew, AVPs and Band D employees will be reduced by 10 per cent with effect from April 1," IndiGo CEO Ronojoy Dutta reportedly said in an e-mail to employees in the fourth week of March. GoAir CEO Vinay Dube, too, wrote to employees about salary cuts in March."They cannot lay off staff because, when the situation improves, they are going to need them. Airlines have to do trade-off deals with employees, which is to pay them partial salaries for a few months and keep them on rolls," says Martin.

The huge magnitude of the impact will result in a series of changes in the times to come. CAPA says a total shutdown will result in deferment of aircraft deliveries from Boeing and Airbus, shutdown of small carriers, exit of Tata Group from one of its two airlines (AirAsia India and Vistara), 30-50 per cent drop in domestic and international traffic in 2020/21 over previous year and consolidation of operations in a single terminal by Delhi and Mumbai airports when air services resume. "Although it is too early to come to a firm conclusion, what emerges on the other side may be a smaller, consolidated industry," says the CAPA report

Things are not going to be the same as they were in the past when this outbreak gets over. Airlines have a lot to learn from this unprecedented situation. First, they would need to reduce their dependence on expat pilots. In the fourth week of March, GoAir announced termination of expat pilots' contracts due to curtailed operations. At the moment, over 30 per cent of the commanders in India are expats. The large dependency on foreign pilots is due to lack of talent available in India at senior pilots' level, and stringent promotion norms to the commander level. Though airlines like IndiGo have been pushing hard to create a large base of locally-trained pilots, the whole industry needs to focus on this. "The other way to handle this is to increase the industry-wide fleet size, so there are more avenues for pilots to increase their flying hours. But that's a time-taking process," says an analyst. Unlike the US where there's a robust general aviation sector (private jet services) that feeds a large number of trained pilots into the commercial aviation industry, general aviation in India is small.

Also, once the restrictions are lifted, the revival of aviation sector is going to be gradual. As the entire economy has been hit severely due to pandemic, travel - business and leisure - will be restricted for the first few months. The airlines would incrementally add planes to their fleet based on the demand scenario at that point.

The bigger worry is being faced by Air India. The national carrier has already postponed the deadline to submit proposals from potential buyers to April 30 from March 17 earlier. There are strong chances that the stake sale plan will be shelved; it may not be picked up before 2021. In the meantime, the loss-making national carrier will need a large assistance from the government - estimates suggest over Rs 11,000 crore - to continue operations given its strained financial condition.

The sector is asking for a relief package from the government to tide over the crisis and pay salaries. Some of their demands are moratorium on outstanding payments such as airport charges, ATF and GST bills, rescheduling of interest and principal payments on working capital loans, bringing ATF under GST and cash infusion for partial payment of salaries.

In a letter to the aviation secretary dated March 13, the board of airline representatives in India asked for relief measures in the form of 30 per cent reduction in aeronautical charges for six months. "Passenger uplifts have dipped considerably, which has badly affected cash flows of airlines... The airlines are facing the brunt of a recessionary situation with decreased travel demand and lower yields," the letter said.

The coronavirus outbreak has wrecked havoc on global aviation too. Global body IATA, which represents some 290 airlines or 82 per cent of air traffic, has estimated $113 billion losses for the industry in 2020 (as on March 9), significantly higher than its previous estimates (in February) of $29.3 billion. As per IATA, the air transport sector in India employed 6.2 million in 2019, and contributed $35 billion to GDP. With the spread of coronavirus, such a large industry has come to a grinding halt. When will it take off is difficult to tell.