Employees at these companies rarely have a reason to quit.

Leena Nair, Executive Director, HR, says that it is difficult to single out any one thing that Hindustan Unilever has done differently. That's because, she says, HUL has honed a consistent and holistic approach when it comes to attracting, retaining and engaging talent. "Over several generations of leaders, we've evolved a culture of coaching, mentoring and learning which the company believes is a unique strength and has resulted in HUL being referred to as a 'leadership factory'," she adds. But it is not resting on its laurels, and is busy offering several work-life balance options to the new-age employee. Ever since HUL moved into its new 12.6-acre facility in north Mumbai in 2010, for example, it has become a more comfortable and agile workplace. The new campus offers flexible work policies, including flexi time, and facilities such as a day-care centre.

That apart, HUL has begun measuring employee health on site, with a Global Vitality Mission. Unilever believes this vitality mission will help it excel and stay ahead of its competitors. 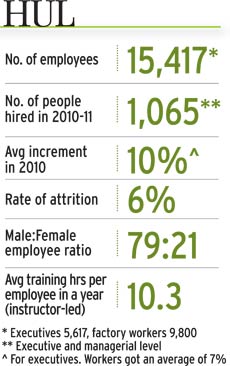 It certainly has worked well for some employees. P. Chandrashekhar, 51, Senior Manager, Insurance and Risk Management, has been with HUL for the last 11 years. "I took the test when I was 48. I had a medical condition of the heart but did not know about it as there were no external symptoms. The company then got me engaged with one of the best cardiologists in the city and now through exercise and medication my condition has improved a great deal," he says.

The other thing that sets HUL apart in its sector, Nair says, is the close linkage it fosters between individual and organisational growth. "We believe that engaged and passionate employees are a leading indicator of the future growth and success of our organisation," she says.

It is a concern ITC, #2 in this sector, shares. The company says it gives its employees a clear path that enables them to grow. "We believe people join us for the long term and their career perspectives are longer," says Anand Nayak, Executive Vice President, Corporate HR. Nayak, 59, has spent close to 38 years in ITC, having been recruited from XLRI, Jamshedpur, in 1973. 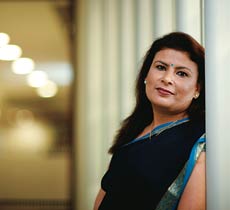 Simar Preet Kahlon of Nestle
"There are many others like me," he says. What makes ITC work as a talent brand is its emphasis on learning and growth. Senior managers are coached and mentored to be trainers."We judge people harshly on performance, but when the chips are down, we treat them kindly," says Nayak.

Ever since the job market began looking up, the one area of concern for ITC has been attrition in the first five years on the job. Attrition is close to 10 per cent, but for senior managers, it is negligible.

While it has "a long way to go in terms of gender diversity", its inclusivity model is based on employee diversity. "We don't believe in cloning," says Nayak. If the company goes to the best business and technology schools to recruit, it also recruits from Tier II schools. The logic: All good talent may not have access to the best institutes. Diversity is one of the issues Nestle India Chairman and Managing Director Antonio Helio Waszyk has decided to accelerate since he came on board in the summer of 2009. Since then, the organisation has had Swati Piramal on the board. The head of the Maggi brand is a woman (Shivani Hegde), so is the coffee business head. "It's not just for balance, but also due to their competence," says Helio Waszyk.

The company has 2,500 white collar employees and 12 per cent are women. "Manufacturing has a challenge in terms of hiring women," says Biplab Baksi, Senior Vice President, HR. Nestle insists on its employees finding enough opportunities to work and grow within the company. Take Simar Preet Kahlon, the first woman to join Nestle India as a trainee engineer 20 years ago.

Kahlon's first stint was at the Moga factory from where she moved to Samalkha to set up a greenfield project. In 2005, she went to Nestle Sri Lanka as project leader for a product called NestoMalt. At the end of 2006, she was appointed the first Safety, Health and Environment manager. "I have never had a reason to quit. Cross-function, cross-geography exposure has kept my career growing," says Kahlon.

Nestle India's latest employee engagement survey, done every two years, attracted responses from 98 per cent of the employees. This high percentage is the first for any Nestle location worldwide. "That itself is a great sign for the survey was voluntary in nature. Employees want to speak out," says Baksi.

Pharma: A tonic for talent