Employees see themselves as brands, make hard choices and want work-life integration. This and more in the 10th Business Today best employers study.

When you have perceptions from a data set that covers over 3,500 companies and represents the voice of close to 9,000 employees, it is easy to make blanket statements on trends. It would be chimerical to do that in a market as dynamic as India. But with hirers ready to flood the jobs landscape and the Indian employee emerges wiser from the tough job market of the last two years, Business Today in its tenth annual edition of Best Companies to Work Foruncovers new facets of talent management in a continuum called the Indian workplace.

To be read in the context of record attrition levels predicted for 2011, the survey makes for relevant, if not critical, reading for almost anyone in India: workers, managers, HR chiefs, CEOs, businessmen.... And, even for spouses, parents and children because, for the first time, there are strong signals from the workplace that the life part of the work-life balance, acknowledged cursorily until now, is increasingly becoming a deciding factor in jobs.

Dive straight in. Will you work for a company that you have not even heard about? Code writer Shireen Fathima did not think she would but has done exactly that. Until July 2010, Fathima, 28, was working with a brand that is as big as it can get - Infosys Technologies, the No. 1 company in this year's Best Companies to Work For ranking. After six years and three months at Infosys, Fathima decided to move on, but not to another workplace teeming with thousands and thousands of employees. Soon, she zeroed in on a workplace of her choice: a small company closer to her home and one that gives her more exposure.

"I had not even heard of my current employer," says Fathima. She is a Technical Lead at Marlabs Software, an information technology solutions firm with revenues of $100 million and 1,800 employees globally, including 1,000 in India. "I have discovered a huge comfort factor in a smaller set-up. Everybody acknowledges your work and I feel my worth for the credit I get," she says. Compare this with some 128,000 employees at India's second-largest IT company by revenues. "At Infosys you can get lost. Brand mattered in the beginning, but not any more," she concludes.
Brave new world

Shireen Fathima left Infosys to join a company whose name she had not even heard of. She says she found comfort with a smaller set-up
Fathima is part of a growing group of people we came across while meeting employees for the BT-Indicus-PeopleStrong Survey of Best Companies to Work For. This group is conscious and mindful of "Brand Self ", as a talent watcher puts it. Employees are overwhelmingly focused on their own careers. "My career is my business," goes the reasoning. "You may be a great employer, but if you are not making my career grow, I leave." 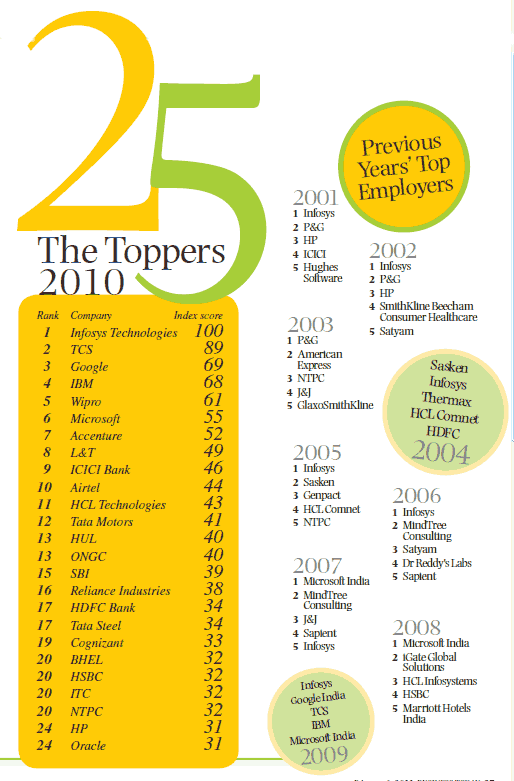 In the survey, 75 per cent of the respondents said they will leave an organisation if they feel their career is not growing. Ganesh Shermon, who heads the People & Change Practice at KPMG, has an explanation for this phenomenon. In place of the larger-than-life institutions earlier, it is the individual who has taken centre stage. His take: Social media have given people an identity. An employee can stand up, disagree and be listened to. "Companies are telling the employee that he is the brand and these employees in turn help build the employer brand of the company," says Shermon.

Pallavi Aron of the Class of 2011 at MDI, Gurgaon, with a classmate. Pallavi says her dream employer is P&G for its worklife integration initiatives
Cigarettes and personal care products company ITC vouches for the trend, as the organised workforce expands at a fast clip. "This is because the young managers focus on their own career rather than feeling a sense of belonging to the organisation," says Anand Nayak, Executive Vice President, Corporate HR at ITC, who has spent 38 years at the Kolkata-based firm. People build careers and not institutions. That is today's reality. Companies that can recognise this trend and ride it will be the ones that will be better off.

The phenomenon is not restricted to just youngsters. Keshav Murugesh, Group CEO at WNS, a business process outsourcing company, has now been working for close to 25 years. While HR pundits tell you that your expectations change as you progress in your career, Murugesh, 47, insists that they have not changed for him. He still looks for a high value brand, a learning organisation, a high growth industry, and the opportunity to stand out. Almost all the 20-somethings in the BPO industry will identify with his wish-list. CEO hirings were always a tough ask but it has become even more difficult in recent times. "I feel that the criteria for choosing who you want to work with, why you want to change a job, and even why you stay in a job have changed completely in the past 12 to 18 months," says headhunter R. Suresh. These days the managing director of Stanton Chase, an executive search specialist, gets asked tough questions - often around corporate governance. A potential CFO candidate, recounts Suresh, asked whether the unlisted entity that was wooing him had cash on its balance sheet and even wanted to take a look at its bank statements. In another instance, there were queries around how a company works on government deals. And, there is always the question of who the boss is. "People want to work with quality leadership," Suresh says. At 47, WNS CEO Keshav Murugesh wants what a 20-something would want from an employer
Bosses themselves want to make sure that all risks are counted. Almost all CEO appointments today come with watertight agreements on how they will be taken care of if things do not go according to plan. "Today severance is talked about more than compensation," says Suresh. The preference for Indian companies as favoured employers has gone up substantially in this year's survey (it was limited only to people already employed, not students or those not working). Employees, in other words, prefer to be closer to the power centre rather than work for a unit of a multinational corporation. That explains why in the overall rankings, 16 of the top 25 companies, or 64 per cent, are Indian. Compare this with the profile of the respondents: one-third were from multinationals, 40 per cent from the Indian private sector and 14 per cent from public sector units.

Employees, regardless of the sectors they were working in, ranked Infosys and Tata Consultancy Services as the top two companies - the MNC employees ranked Infosys and TCS ahead of Google and IBM (ranked No. 3 and No. 4, respectively). "People want the destiny of their company to be decided by what happens in India and not by the destiny of their parents abroad," says Govind Iyer, Partner, Egon Zehnder India, an executive search firm. So, even companies that have a long history in India are in demand. A case in point: middle-level managers opt for safe and secure options such as Hindustan Unilever Ltd, or HUL. This, says Asim Handa, Country Manager of FutureStep, a Korn/Ferry company, is because during the year-and-a-half-long slowdown companies like HUL stayed steady.

Slice the data some more and another employee preference emerges: a strong convergence of corporate and employer brands. Larsen & Toubro, HCL Technologies, ICICI Bank and Accenture are cases in point. Each has risen sharply in our rankings this year. HCL had figured out its "Employee First" mojo much before others. ICICI Bank had built a strong image of executive leadership and diversity. L&T has enjoyed iconic status for decades. "Non-technology people like to work for L&T and so do those in technology," says Shermon. And, what about the corporate brands that may not be strong or even desirable in terms of image? Like Mahindra Satyam that in its earlier avatar Satyam Computer Services almost did not survive? Says Hari Thalapalli, Chief Marketing Officer and Chief People Officer at Mahindra Satyam, "The workforce is far more mature than organisations give them credit for. Only organisations that are capable of catering to the changing aspirations of their employees will survive tomorrow." But do they need to hardsell themselves to potential employees? Hardly. "There is no reminiscence of a crisis at present," says Thalapalli.

Mahindra Satyam has been hiring more than 600 employees a month for about six months now. One of them, Rajesh Kataria, 30, is an Assistant General Manager in the sales team at Hyderabad. He joined the company in May 2010, immediately after completing an executive management programme from IIM Bangalore. He already had seven years of work experience, including six at Accenture in Bangalore. What attracted Kataria to Mahindra Satyam was the fact that he could be a part of its turnaround story. 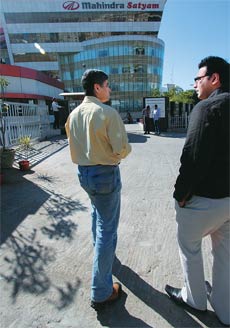 Ramesh Ramakrishnan, left, and Rajesh Kataria, both at Mahindra Satyam.
"Since they had lost people, it seems logical that they will give you more responsibilities," Kataria says. Again, an example of an employee knowing where he is headed.

The future
What are you likely to hear next year? BT went to the Management Development Institute, or MDI, Gurgaon, and asked a group of students from the Class of 2011 this very question. These students will be among the thousands who will be joining the job market in a couple of months. Pallavi Aron, a student at MDI, says her dream company is Procter & Gamble, the personal care products giant. "Not just is it a big brand, it also offers work-life balance," says Aron, 25. This finds resonance in the survey findings where work-life balance emerged as the second most important priority for the respondents after performance appraisal.

Godrej, Marico and Airtel are the domestic favourites among students, with TAS, formerly Tata Administrative Services, as the most preferred choice any given day. Neither the telecom spectrum scandal nor the burning Nanos have changed the perception of students about Tata, it seems.

The HR head at IBM India, Chandrasekhar Sripada, sees signs of a maturing job market where employees know exactly what they want and will pursue those goals. "As the labour market matures, we may have a shift in mindset that favours working for an L&T and not an Infosys," he says. That, in fact, has already started to happen. On Fathima, who quit Infosys to join a virtually unknown company, Sripada says, "For every employee like her, I have two who like scale, processes and brand. In a fair labour market, it all boils down to perception and needs."

So, what is the perception of employer brands in the eyes of the Indian employee? Our cover package should tell you that.

And the winners are...