ICICI Bank, Larsen & Toubro, Accenture, and HCL Tech rise sharply in the Business Today's 'Best Company to Work For' survey. What makes them stand out? We find out...

In August last year, 27-year-old Hemant Shah, a senior programmer with Accenture India, was returning home from a movie when the car he was travelling in had a nasty collision in Gurgaon. He had to be rushed to a hospital and spent three weeks convalescing, time he didn't have and leave he couldn't afford to take. Just as he was faced with the possibility of going on "leave without pay", Shah chanced upon an "Hours That Help" leave policy that gave him another option. Here, employees who have extra leave can put them into a virtual bank and have needy colleagues use them in emergencies. "This initiative avoided a situation where I had to take leave at a loss of pay," says Shah. Accenture has had this unique leave policy in place for two years now. "We look to provide an engaging work experience for our people," says Accenture India's HR Head Prithvi Shergill. For employees, this works as a feelgood, an instant gratification of being able to do something substantial beyond work at work. Perhaps that is the reason Accenture has risen in the rankings (up from #16 to #7). 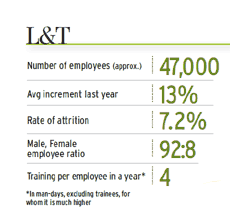 Not just Accenture, other companies that have risen in rankings this year have two things in common: one, initiatives that make them stand out in terms of an employer brand, and two, employee communication on what their employer brand stands for. "A clear message to others: Build your corporate brand and make it visible to the employees," says Pankaj Bansal, Co-founder and CEO of PeopleStrong, a partner in BT's Best Companies to Work For. 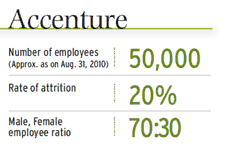 Talking about Accenture, the IT services and consulting firm has not had it easy in an increasingly competitive market. But in terms of employees, what has perhaps worked for the organisation is a firm focus on individual training and development of its employees, with options to move not only across its technology, BPO and consulting businesses, but also across continents. The firm offers courses with top colleges including XLRI and ISB, Hyderabad. It is this constant learning and mentorship that has kept Kushal Sharma, 33, at Accenture for nearly eight years. The deputy manager for risk and compliance is a commerce graduate who completed his MBA while at Accenture and has benefited from mentorship by Sindhu Menon, the unit's general manager. "The opportunity to work with clients across the globe and have Accenture invest in my education keeps me here," he says.

Sitting in his corner office on the ground floor of Accenture's campus on Bangalore's Banerghatta Road, Harsh Manglik, Chairman and Geography Managing Director, is focused on keeping the feel of a small - and nimble - company at Accenture India. "We have a shirtsleeves rolled-up culture here and we think about our people as a network rather than a hierarchy," he says.

Walking the talk
Coming out of the slowdown, this bank took a big and conscious decision that is winning it accolades from HR watchers and employees alike. ICICI Bank decided, oneand-a-half years ago, that it was time to shed its image of working like a ruthless army. "We are very conscious about addressing the softer issues," says K. Ramkumar, Executive Director, HR. So, at the moment, it is all about people and a connect between the business leaders and its employees. "We want to connect with employees better while still retaining the culture of a demanding, pushing and result-oriented organisation," he adds. The idea is to make the senior management a listening force.

Vineeta Rajadhyaksha, Regional Head, Mumbai, West, who met Chanda Kochhar last year and Executive Director Ramkumar recently in a group, says they listen and implement suggestions, too. Ramkumar recalls how the casual leave policy of the organisation was changed after receiving a feedback in an I-Voice meeting. The leave policy earlier had a clause of treating any leave more than a day as privilege leave. Why not relax the rules for those who take prior permission for leave, some employees suggested. "We relaxed the rules immediately," says Ramkumar.

Another suggestion related to pooling the ideas of young employees of the bank, which otherwise are not heard in any forum. "This idea is now being institutionalised within the bank," says Rajadhyaksha. The bank ranks right on top in BFSI rankings and has risen 10 ranks overall.

On solid ground
If the downturn did anyone a good turn, it was the engineering companies like Larsen & Toubro. In the competition to grab engineers, they caught up with infotech companies - a role they have always been behind in. What further helped their employer brand was the fact that the labour market is maturing and employees are learning to look beyond the short term. M.S. Krishnamoorthy, Executive Senior Vice President of L&T, understand this. "Engineers today are keen to build some domain knowledge as part of building their careers," he says. This is what is driving them to L&T. What also helped was the fact that the downturn left the IT companies hamstrung in their ability to pay top dollar while the infrastructure boom at the same time boosted engineering companies. Rima Desai
Rima Desai, an assistant manager, had worked for Infosys before moving to L&T in 2009. "Being a mechanical engineer, I knew I would be better off in a company operating in the core sector," she says. Also, L&T offered her opportunities to move faster up the corporate ladder; she has been promoted once since joining in 2009. Currently on a maternity leave with a one-month-old baby, Desai hopes to return to her job by February. "Also, I can have a more settled life in L&T without hindering growth. In Infosys, I had to refuse on-site postings in places like London," she adds. L&T has also introduced an 18-month MBA programme conducted by IIM Ahmedabad for its employees and every year the company nominates 45 employees and pays for the course. It also allows employees who want to nominate themselves for an MBA to go for a programme elsewhere. 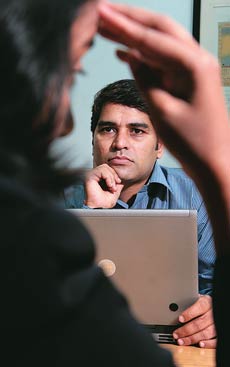 Kushal Sharma
What about salaries? Krishnamoorthy feels that there is little difference at the starting level, but the IT companies are able to pay a lot more to employees with three to four years of experience and then the gap keeps increasing. "In the last few years when the IT companies slowed down, we did not have to slow down as much and we managed to catch up. At L&T now we have so many orders, we will need all the engineers (we can hire) and we have to reduce the gap if we want them," he says. The senior VP's task gets easier with employees across industries ranking the conglomerate among the top 10 preferred employers. L&T rises from rank 11 to 8.

The first mover
When you declare that your employees come first and customers second a few years before the slowdown, what do you do in the slowdown and beyond? D.K. Srivastava, Global Head, HR, HCL Technologies, who has spent over a decade and a half in the Noida-based company, gives you the big picture. "Like it or not, we are in the business of people; it is the grey matter in our employees' heads which is our greatest asset," he says. 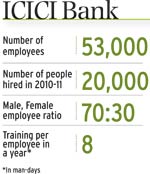 All the leading executives of the company make it a point to try and meet each employee during interactive sessions called "Directions". "We finished 'Directions 11' just now. At these meetings, anybody can ask Vineet (Nayar, the CEO), me or other members of the top management a question," says Srivastava. Since these meetings are usually face-toface, though in groups, the entire process takes over 35 days.

mosimageIt was during these meetings that the company openly discussed the recession of 2008-09. "We told our employees the options that we had. We could have retrenched 2,000-3,000 people and improved financial indicators or we could have continued and not left any HCL-ite behind," Srivastava says.

But the management had employees fulfil two conditions if no one was going to be retrenched: "that employees should add more skills and that they should become more flexible." And according to the HCL Tech head, that was a hit. "Our utilisation rates improved, and the fact that we have multi-skilled employees is paying off for us even today."

And as the survey points out, open communication works. HCL Technologies has been growing faster than ever, adding over 20,000 new faces over the past four quarters.

And the winners are...