Married to the job

A myriad things go into creating a company where people enjoy working and would like to stay on. You need competitive salaries, timely promotions and learning opportunities. And then there are the intangibles. What is a good dish without care and love lavished on its preparation, or the right ambience in which it is served? So, does a company make employees' roles clear to them? Does it care for diversity? How does it downsize?

In this season of appraisals, when white forms in brown envelopes are landing on workstations, you may find these questions sloshing around in numerous minds - employees' as well as employers'. For the answers, Business Today, in its 11th listing of the Best Companies to Work for, brings to you the results of an Indicus Analytics survey spanning 6,176 employees - 12 per cent of them women - across 4,436 companies in 323 towns and cities.

Predictably, money is a key consideration, especially at the lower rungs of the ladder. Growth prospects are almost as critical. However, CEOs and heads of human resources (HR) would do well to pay attention to a third dimension; for, the culture of a place is increasingly vying with compensation and growth in defining the appeal of an employer.

"Many people tend to accept whatever comes their way when they begin their careers," says Hitesh Oberoi, the CEO of Info Edge India, which owns job portal Naukri.com. "Even so, young people today also ask about the work culture."

They want to know if the company is really one where they can build their careers. At senior levels, too, most professionals seek more than a good salary.

So, you would think, the simple solution lies in providing a good work culture. But that's simpler said than done. After all, who is to say what constitutes good culture?

Click here to Enlarge
"There comes a time when you have to ask yourself: 'Do I wish to be with the company I want, or do I want to be with a company that wants me?'" says C.C. Lakshmanan, Head of Research and Development (R&D) at ITC. Lakshmanan joined the cigarettes, hotels and fast moving consumer goods (FMCG) behemoth in 1995. Four years later, he left for General Electric to set up its advanced science and technology R&D in Bangalore. He returned to ITC in 2005, mainly because he wanted to set up another R&D centre from scratch.

"How often do people get the opportunity to join an established company and develop a blueprint?" he asks. "Besides, the growth of the company was compelling."

In speaking of growth, Lakshmanan speaks for all high-performing managers, who are estimated to comprise 15 to 20 per cent of the working population. For the others, there are other considerations.

"For the bulk of the employees, a good workplace really means one which provides a secure job, and one which does not ask too many questions about performance," says K. Sudarshan, Managing Partner with executive search firm EMA Partners India.

Overall, the data suggests that the key to employee engagement lies in providing growth opportunities, varied roles and empowerment.

After two years, he was looking after Delhi and has since risen to Group Product Manager in charge of the popcorn division. "Once they know your ability, they give you responsibility and trust you to take decisions," he says. Agro Tech is majority owned by US foods giant, ConAgra Foods. Adds Narasimha Rao, the company's Vice President of HR: "Young people are hungry for experience and we believe in letting them acquire it." Agro Tech's attrition rate, at 15 per cent overall and less than five per cent for key executives, is rivals' envy. 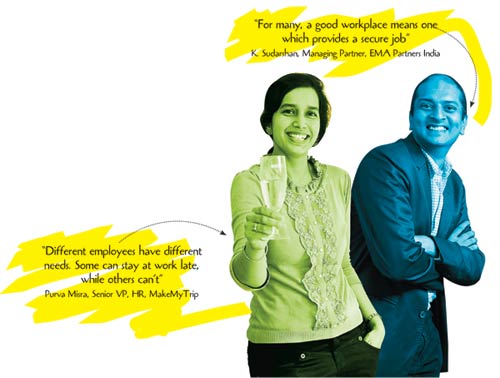 So is ITC's. Its senior executives hardly ever quit. Attrition at senior levels is less than five per cent and for frontline staff around 10 per cent. Naturally, ITC and Agro Tech rarely hire laterally, preferring to promote insiders.

ITC also backs employee initiatives. "We allow people to incubate businesses," says Anand Nayak, Head of HR. He recalls how the team in charge of the paper business suggested getting into greeting cards. A few years later they realised they were not getting anywhere and came back with a proposal to enter office stationery. The company placed a second bet on them. This time it hit the jackpot. In four years, office stationery has grown into a Rs 500-crore business for ITC.

The company's reputation for giving its employees a chance, or two, has spread. "We got ample feedback about ITC from our alumni," says Adithya Puri, who studied at the Indian Institute of Management, Kozhikode, and is now Assistant Manager in the company's sales management information systems. "It is known as a place that nurtures." 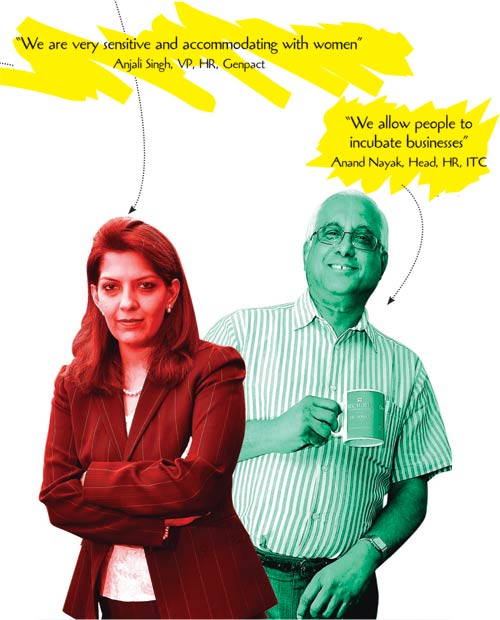 Figuratively speaking, that would be music to the ears of those hoping to join ITC. But at travel portal MakeMyTrip, it is literally music that drives some of the employees. Dushyant Arora, Assistant Vice President, User Experience, who has been with the company for two years, says joining the company was like taking a shot in the dark. "I did not know much about the company and wondered if it would pay salaries on time."

He hit bull's eye. Not only does he get paid on time, he has fun, roping in the in-house band for events. No longer groping in the dark, he has turned down offers from better-known companies like Accenture.

For those less adept at making music, there are Thai foot massages and wine appreciation sessions. And flexible hours. "Different employees have different needs," says Purva Misra, Senior Vice President of HR at MakeMyTrip. "There are some young employees who can stay at work late into the night, while there are others who can't. Some have greater leave requirements than the others." The company tries to accommodate individual needs as far as possible. Flexibility is the mantra at business process outsourcing (BPO) giant Genpact as well, especially when dealing with women employees. It offers them the option to work from home and sabbaticals of up to a year. "We are very sensitive and accommodating with women," says Anjali Singh, who is Vice President with the company's HR and training department. Genpact claims its work culture is what draws and retains talent, although it pays average salaries. "We have an overall attrition rate of 28 per cent, which is really the best in our line of work," says Piyush Mehta, Singh's boss.

Women employees are vocal in favour of their employers at financial services giants HDFC Bank and ICICI Prudential Life Insurance Company. "We get all the support we need to take on any new project," says Zenobia Mehta, who has been with the former for more than a decade and is now a Vice President.

Matching her loyalty is Kalpana Sampat, who has been with ICICI Pru since 2000. She had quit public sector monolith Life Insurance Corporation of India to jump into the private sector pool and has since risen to become ICICI Pru's Chief of Branch Operations in underwriting and claims. "I admire its culture of transparency, in which meritocracy reigns supreme," she says.

However, there are issues at workplaces which go beyond transparency, flexibility and opportunity. The litmus test for the work culture is when people must be told to go.

This was the test that stared Max New York Life in the face in 2010, when it had to lay off 1,500 staff as part of a reorganisation of distribution infrastructure following key changes in regulations. It first identified 20 "leaders" to discuss the issue and then roped in 700 others to communicate the grim news. "We were up front in revealing our problem and had oneon-one discussions with the affected employees," says Rajit Mehta, Chief Operating Officer. Here, too, there was better treatment for women. Those on maternity leave, or in the family way, were spared the axe. So were some others facing financial problems. Some of the better people on the lay-off list were given temporary projects to help them with the transition. The company also created a team to assist the laid-off employees in finding jobs. "We kept up our support for three months," says Mehta. The result? "We were the only company in our sector to gain market share in 2011."

Max is not the only one; many other Indian companies go the extra mile to accommodate the needs of employees facing personal problems. "We have a history of sticking by our employees when they are in financial or health-related difficulties," says Rajan Dutta, President, Reliance Communications, the telecom arm of Anil Ambani's group. Its key employees get soft loans and easy access to top Mumbai hospitals such as Kokilaben Hospital, named after Ambani's mother. So, coming back to where we started, what constitutes good work culture? Perhaps all of this and then some. Clarity looks critical.

"Company strategy and goals have to be defined clearly," says Arvind N. Agrawal, Head of HR at RPG Enterprises. RPG's processes clearly make an impression on employees, as seen in the case of Sumit Khare, General Manager with group company CEAT. Khare left in 2003, only to rejoin two years later. "I could not get this place out of my system," he says. "I loved the challenge and the learning this place offers."

Click here to Enlarge
According to N.S. Rajan, who runs the People and Organisation practice for Ernst & Young, the culture defines how employees behave at work and how work gets done. "People find resonance with an organisation depending on how they experience the workplace and the prevailing attitudes there."

Adds Sanjay Singh, Senior Vice President of sales and distribution at ICICI Pru: "You are able to ride out a less-than-perfect situation in your career because you can see opportunities for growth and the goodness and transparency in the culture of the place."

But good firms that nurture talent are also ripe for poaching. Nevertheless, it is a dish worth cooking. "A poor work culture neither attracts nor retains talent," says Santrupt Misra, Head of HR at Aditya Birla Group, one of the country's biggest conglomerates. But you must cook with care.

"Dumping many ingredients in a dish does not make it tasty. The way the cooking is done is crucial."


Why TCS is the best company to work for