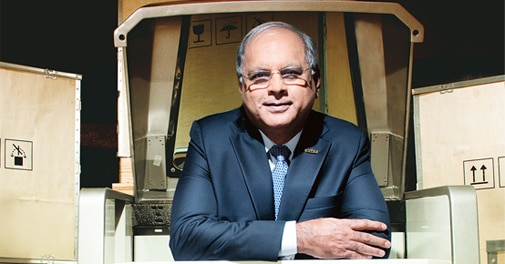 Usually, when entrepreneurs get funding for a new venture they invest in their business. They set up their offices, hire people, and build products or services they want to sell. But Suresh Vazirani, who founded Transasia Bio-Medicals in 1979 with an initial capital of Rs 250, did something unusual. He spent the Rs 1 lakh he had got from an acquaintance for his nascent health-care business to go on a six-month-long world tour instead.

It wasn't a leisure trip, though. Vazirani, an electrical engineer, visited multinational companies to get trained in handling diagnostics equipment. He came back with a contract to distribute a Japanese company's equipment in India. "I did not have money to buy the products," he recalls. "So I would help (hospitals and doctors) import equipment and provide them technical support."

Today, Transasia is one of India's largest makers of diagnostics equipment and exports to about 90 countries. Its revenue has grown 20 to 25 per cent annually for 20 years. It reported total revenue of Rs 697 crore in 2012/13, with overseas sales accounting for about 45 per cent.

Vazirani was born into a Sindhi family that migrated to Jaripatka, near Nagpur, after partition. Soon after completing his studies, he got involved with Moral Re-Armament, a non-government organisation whose Indian arm was led by Rajmohan Gandhi, Mahatma Gandhi's grandson. His association with Gandhi and an incident in 1977 when he helped fix a medical device in Mumbai's Jaslok Hospital where activist Jayaprakash Narayan was being treated for kidney ailments, pointed him to the direction in which he continues even today. 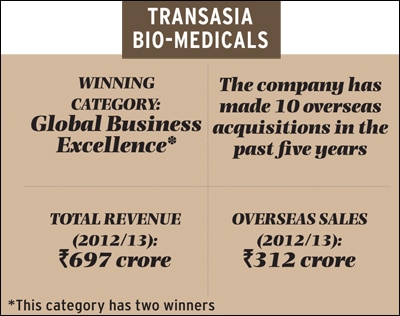 Transasia, culled out from 'Transform Asia', aims to improve the diagnosis of diseases in countries that need it the most - the emerging economies - and bring affordable solutions to people who need them the most. "Any company that has done good for itself in India should look at emerging markets," says Frost & Sullivan health-care analyst Jayant Singh.

Vazirani started looking westwards a few years ago to expand business. Transasia has set up a unit in Germany, ERBA Mannheim GmbH Group. Through this unit, the company has made 10 acquisitions in countries including the Czech Republic, Russia, Germany, France and the United States in the past five years.

Vazirani has now set his eyes on Latin America, where TransAsia operates only through distributors. Transasia, he says, is likely to spend about Rs 200 crore over the next year to set up a unit in Mexico and make an acquisition in Brazil.

The company will continue to focus on emerging economies. "About 70 per cent of the population in emerging markets still does not have access to early diagnostics," says Vazirani. "It's a huge opportunity and a huge challenge."
TweetYoutube
Tags: Transasia Bio-Medicals | Best emerging companies 2013