Under Anand Mahindra's leadership, M&M is scaling up its existing businesses and also betting big on new ones.
Sunny Sen | Print Edition: Dec 21, 2014 The year was 2007. Ford was struggling to avoid bankruptcy. It had decided to sell its international assets including Aston Martin, Volvo, and Jaguar and Land Rover. Aston Martin was picked up by a consortium of private equity firms while Chinese automaker Geely bought Volvo. About Anand Mahindra
In the race to buy Jaguar-Land Rover (JLR) were the Ratan Tata-led Tata Motors and the Anand Mahindra-led Mahindra & Mahindra. In the first round of bidding M&M was leading but then it pulled out, allowing Tata Motors to buy the iconic British brands.

Seven years later, Tata Motors' India unit is struggling. The company's fortunes are sustained by JLR, which made more profits ($2.9 billion) in 2013/14 than what Tata spent to acquire the company ($2.3 billion).

Does Mahindra regret not having gone ahead with the bid? "What became clear to us was if there was a downturn in the market, given the scale of the business, we would not have the wherewithal to withstand it," says Mahindra, who had called a friend in Ford at the time to ask if he was doing the right thing by stepping back. The friend concurred. "Anand, if there is a downturn you will lose your entire group," he warned him.

Indeed, days after the JLR deal, the economic meltdown set in and sales of the company fell sharply, causing huge losses. The poor performance of JLR weighed on Tata Motors, which survived thanks to its deep pockets. Mahindra's decision to withdraw, then, may have saved M&M from being dealt a massive body blow.

M&M has grown steadily, expanding into new businesses. In the past three years, M&M's total income grew at an annual rate of 19 per cent to Rs 41,226 crore, while net profit and market capitalisation rose 13 per cent annually to Rs 3,756 crore and Rs 55,956 crore, respectively. 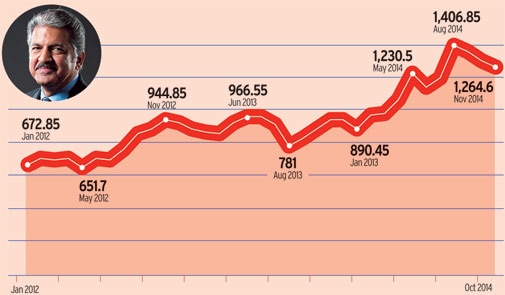 M&M's shares have more than doubled since January 2012

M&M is one of the largest vehicle manufacturers in India and the largest seller of tractors globally. The newer areas that the flagship M&M is venturing into is part of Mahindra's vision of taking the company to the next level. Over the years Mahindra looked at niche segments - except tractors - to build businesses. Recently, M&M has entered into defence and renewable energy sectors. M&M's top and bottom lines have improved too
M&M was founded in 1945 by K.C. Mahindra, J.C. Mahindra and Ghulam Mohammed, under the name Mahindra & Mohammed. Mohammed in 1947 migrated to Pakistan to become its first finance minister. The company name changed to M&M. A steel trading company then, it started selling Willys Jeeps in India, the group's first brush with autos. Anand Mahindra is J.C. Mahindra's grandson.

Mahindra joined the group in 1981 as executive assistant to the Director of Finance in Mahindra Ugine after finishing his MBA from Harvard. It was a different India. Businesses were governed by the licence raj, where the government would select five to six companies to make or sell in any segment.

Mahindra Ugine, headed by Mahindra's father Harsh, was one of the six players which had licence to make specialised steel products for electric arc furnaces. "It was a cosy market, and nobody cared that I had joined," says Mahindra. But suddenly, in 1981, the government, for reasons Mahindra doesn't know, gave licences to 36 players to make electric arcs. As a result there was excess competition, something which Indian business houses were not used to. Prices plunged and there was surplus capacity in the sector.

Ugine didn't cut price and sales plummeted and the company posted its first loss. It was time for Mahindra to stand up and be counted. "When all hell broke loose, it was an opportunity for somebody new," he says. He turned around the company gradually by selling inventory and squeezing the supply chain.

He never looked back after that. In 1991, he became the Deputy Managing Director of M&M, then a maker of off-road and agriculture vehicles. The company's chairman was Keshub Mahindra, Anand's uncle and K.C. Mahindra's son.

"Anand created the war rooms. As a sector head, you need to come and tell what your strategy is, like a general"

After liberalisation, between 1991 and 1994, there were rumours of M&M businesses winding up. No one thought that Indian automakers would survive with companies like Ford, Daewoo and General Motors coming to India. "Rumours of our demise would be circulated every year," says Mahindra. "That's the wrong thing to tell me. It makes me determined to prove sceptics wrong."

That was also the time when Ford was looking for a partner in India. M&M had never made hard-top vehicles, so it grabbed the opportunity. A joint venture was formed with Ford but the car it launched failed to make an impact. But the 300-odd engineers at the venture had learnt making hard tops. The same team, headed by Pawan Goenka, made the Scorpio at a project cost of Rs 600 crore, the maximum M&M had ever invested in any project. Soon Scorpio became one of India's highest selling SUVs and M&M the biggest seller of utility vehicles.

The other nominees: Very large companies
In the late 1990s, a consultancy firm (Mahindra doesn't want to name it) advised him to focus on tractors, where the company had global scale. But his gut feeling was that India had many more opportunities. He remembers how management thinker C.K. Prahalad came and taught a much younger Mahindra and Adi Godrej "to stick to our knitting". Mahindra was intrigued that the world did not believe emerging countries like India could have diversified conglomerates. Around the same time Harvard professors Tarun Khanna and Krishna Palepu wrote an article on the need for conglomerates to diversify in emerging markets.

Mahindra then decided to create a structure that will allow the group to be in multiple sectors. The businesses were divided into strategic units. "Earlier, there was no CEO for every unit," says V.S. Parthasarathy, M&M's CFO and Chief Information Officer. "Anand created the war rooms. As a sector head, you need to come and tell what your strategy is, like a general."

Mahindra focused on having independent presidents who would focus on their line of business. "Overnight I redrew the organisation chart and kicked myself upstairs," he says. Now, M&M has multiple lines of businesses - auto, technology, hospitality, retail, defence and aerospace, and steel - run by autonomous presidents. "These six new sub-entrepreneurs have made significant gains in their own wealth because they share the business," he says.

Mahindra's approach is "segmented strategy". He looks for niches. It's a contrast to the business strategies followed by some leading business houses in India. He cites the example of Reliance Industries - the company wants to dominate competition with its size. This is not Mahindra's strategy. Also, there is a central pool of money that can be used in different businesses. In the Mahindra Group, each company has its own balance sheet and its own cash flow to fund growth.

Mahindra's new bets are defence, retail, aerospace and renewable energy. "We increasingly want to be in B2C (business to consumer) businesses, because it's my belief the biggest legacy you can leave behind is a brand. If you leave behind a solid umbrella brand, there is nothing better than bequeathing that to future generations and managers," says Mahindra.

The other nominees: Auto and Ancillaries (Large companies)
Mahindra says he is not worried about the health of the new businesses. "It is like déjà-vu for me. There were similar concerns then about each business we had started then, and all of them took longer to turn around than some of the businesses now," he says.

It took Mahindra 10 years to develop Club Mahindra. HDFC Chairman Deepak Parekh had his reservations about Mahindra venturing into hospitality but he believed the sector had potential. The business, which started with Rs 30 crore, had touched $1 billion in value by 2007.

Indeed, Mahindra has not lost conviction in any of the businesses he has entered. When he entered the two-wheeler business, with the launch of the bike Stallio in 2010, everyone told him the two-wheeler market will take a hit because the Nano, the world's cheapest car, was being launched.

When he launched scooters, he was told not to enter that business because the scooter market was shrinking. But for the past couple of years scooter has been the fastest-growing two-wheeler business. But Mahindra's two-wheeler business is yet to take off. It had started as a joint venture with Kinetic Motors. That may have been a mistake. "One can look back and say we should not have launched with Kinetic. Perhaps it would have been better to wait for a couple of years and do our own R&D," he says.

To execute plans, Mahindra has devised three "war rooms". The operations war room looks at the half-year performance of the company. Then there is the strategy war room where business teams sit together and debate strategy. The budget war room looks at the implementation of the strategy. Mahindra himself chairs all the war rooms, says S.P. Shukla, President of Group Strategy, Defence Sector, and Chief Brand Officer at M&M. "Anand dares to dream. As a chairman it is very important to do something beyond the day-to-day activity," says Shukla.

Over the past seven years, M&M has made some 50 acquisitions worth $5 billion. The most prominent ones include Satyam Computer and South Korean auto maker Ssangyong. He has turned around both companies.

Mahindra tries not to be a workaholic, though his wife, Anuradha, doesn't agree. "My wife argues I am coming home to work (thanks to technology)," he says, pointing at his two mobile phones. But he does make a point to spend his weekends at his home in Alibaugh. "For me the ocean is a phenomenal comforting kind of presence. It makes you think long term because you see the tide coming and going, and whatever was there on the beach is washed away by the last tide. It's like visual meditation," he says.

There is a lot that still needs to be fixed, and businesses need to scale up. He wants to create a banyan tree with many roots anchored to the ground. There are only a few things he regrets, and not buying JLR is definitely not one of them. But his legacy is not complete yet - he is still in the process of shaping the Mahindra Group.