When Himanshu Kapania took over from veteran Sanjeev Aga as Managing Director of Idea Cellular in February 2011, things looked bad - what with a bloody price war triggered by entrant Tata Docomo's one-paisa-per-second tariff plan. Or, so it seemed. In a year's time, sentiment in India's telecom industry , long used to regulatory shocks, plummeted with the Supreme Court cancelling 122 licences. Idea lost seven licences overnight. But this cloud had a silver lining: competition from some pesky rivals declined.

"As a leader he [Kapania] is much focussed, and he is not threatened by people with good ideas"

Kapania, then 48 years old, was the custodian of the Idea brand, entrusted to him by Kumarmangalam Birla , Chairman of Aditya Birla Group, of which the phone services company is a unit. Kapania had no experience of working with regulators, analysts, media, parliamentarians, investigative agencies, and the courts. "It was a trial by fire... There was fear all around. There was an economic slowdown," he recalls.

He knew he had to be resolute and win one battle at a time. Today Kapania can lean back in his chair with pride. In the last three years, Idea has grown the fastest in the world's fastest-growing mobile phone services market. Idea's operating profits (measured by earnings before interest, tax, depreciation and amortisation) jumped 38.8 per cent on revenues that grew 18.1 per cent to Rs 26,519 crore in 2013/14; net profits nearly doubled. Industry leader Bharti Airtel's India revenue grew 10 per cent to Rs 57,556 crore. Early February 2011 to date, Idea shares have shown off-chart growth - leaping nearly 150 per cent; shares of Bharti Airtel grew some 19 per cent.

The telecom industry and AV Birla Group credit Idea's performance to Kapania, who people inside the company know as an operations guy with an elephantine memory, who is very good with numbers, and is able to take an analytical yet distanced view of things. 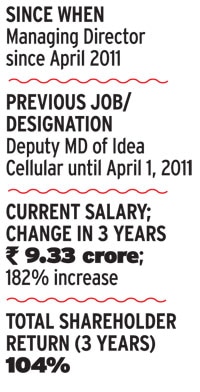 About Himanshu Kapania
Kapania's roots are modest. His grandfather worked at a sugar mill in Daurala in Meerut district. His father, who worked with Shriram Chemicals and Fertilizers, came to Delhi with a large family - Kapania has 10 brothers and sisters. "My father worked hard, and built everything brick-by-brick," he says. Kapania schooled in Delhi, graduated in electrical and electronics engineering from Mesra, Ranchi, and went to work with companies such as DCM Toyota and HCL. After his marriage, he went to do his masters in business administration at IIM, Bangalore.

Kapania has a few role models. He says he learnt telecom regulatory affairs and policy from his predecessor Aga, who also taught him to be a risk taker. From the Ambani brothers, especially Mukesh, he learnt project management and how to scale business (he worked at Reliance Communications for three years before what is his second stint at Idea). "As a leader he is much focused, and he is not threatened by people with good ideas," says Rajan Mathews, Director General of lobby group Cellular Operators Association of India. Mathews, as CEO of a joint venture among the Tatas, Aditya Birla Group and AT&T of the US that later morphed into Idea, had hired Kapania as a deputy general manager in 1998/99. "When [Kapania] was the chairperson of COAI, the telecom sector was facing huge regulatory issues. He was astute in focussing on one or two things - like the pricing of spectrum and its availability," adds Mathews.

Idea's Chief Technology Officer Anil Tandon, who has known Kapania since the late 1990s, says his boss is very good at planning and understanding, and has a great knowledge of the telecom network. When the Delhi circle was launched in early 2000s, Kapania, Tandon remembers, would sit every evening with a map of the company's cell sites. After he took charge as MD, he did the same with the new 2G and 3G sites on the Idea network - the only difference being he sat with the country map - and nixed under-utilisation of the network's sites that was as much as 25-30 per cent.

A CALL TO THE VILLAGES

Idea has had a chequered past. It started as a joint venture between Birla and AT&T. Tata joined later, making it a three-way venture and giving it the ungainly acronym of BATATA. By 2006, both AT&T and Tatas exited, and Birla decided to carry on with the business. In 2007, Idea was the fifth among five private players in the market then and that, too, with only regional operations. Kumara-mangalam Birla had said he would exit all businesses where the company was not in the top three.

That itself set the target for Kapania. "In every business plan we have shared with him, we have overachieved. And we have also achieved his goal of being in the top three," he says. Idea is third behind Bharti Airtel and Vodafone India. It was under Aga that Idea became a national player. He took the company from a 2.5-million subscriber base to 80 million in 2011. His successor has kept the momentum: Idea has about 144 million users today.

But that's just one part of the story. Kapania's success lies in his shifting the focus to rural India and continuing to bet on voice services when rivals focused on mobile data as their growth engines. He looked for pockets where voice offerings were still underpenetrated. In 2011, Idea's presence was only in 80,000 villages. It now covers 350,000 villages. While the industry on an average has two of five customers in India's villages, Idea has 57 per cent from rural India, which contributes to 60 per cent of its revenue. "We chose a different battle ground, and we showed that it is possible to make profits from rural markets," says Kapania.

Nothing is off bounds for the father of two, not even Maoist-controlled areas in Chhattisgarh, Maharashtra and Jharkhand. When an earthquake hit the Kutch region in 2012, Kapania was there the second day, staying for another two. "We have seen cyclones and floods. If you are a nuts and bolts person, you cannot sit in Mumbai and direct your people," he says.

Infrastructure, critical for rural expansion, was expensive. About 40 per cent of the new sites came up in rural India. Idea has 134,000 base stations, which at 80 per cent of the number for Vodafone India and 70 per cent of Bharti Airtel is a high number juxtaposed with their respective revenue numbers. The backing of the Aditya Birla group, as also periodic capital raisings - be it from the equity markets or partners such private equity firm Providence Equity Partners and Axiata Group, formerly Telekom Malaysia (one of Asia's largest telecom companies) or institutional placements and, of course, debt - have kept the expansion going.

In Aga's time, Idea was broadly structured around two hubs: South and West headed by Kapania and North and East run by Ambarish Jain, who is now Idea's Deputy Managing Director. Jain remembers that during Aga's time the moves were more strategic, like tying up with Bharti Airtel and Vodafone India to form Indus Towers to share infrastructure or contract IBM as the information technology vendor.

Jain says that Kapania made sure that the company's investments are more productive. One big overhaul he put the company through was its distribution channels. Earlier, when there were less than 10 circles or service areas, each was handled by one distributor. As the circles increased, the same distributors ventured into newer ones. The distributors gained even if they stretched themselves thin but efficiencies dropped, as they were servicing a larger geography with the same resources and deployed multiple layers of sub-distributors.

Kapania realised this could not continue. He created something billed the "direct distribution system". "You can't keep changing structures, so it's important to do it right the first time," says Jain. Kapania removed the middle layer and created only one layer of distributors between the company and the retailer, so that processes were more transparent. Kapania then copied the model in 300,000 villages. There he created what is called "Son of Soil", where a local businessman was appointed distributor. Idea's distributor base, in three years, went up to 30,000 from 7,000, and the network services 1.5 million retailers across the country.

The Idea MD may have fixed a lot but there are many more battles to fight. Two prime focus areas are the mobile data business that is just taking off and the post-paid business where Kapania agrees Idea has not done well. "Despite being the fastest growing operator, we have not been able to win our market share in the post-paid business (17 per cent) like we did in the pre-paid business," he says. Mobile banking is another business he is waiting to develop. 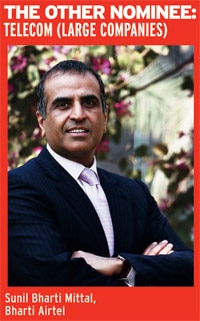 The other nominees: Telecom (Large companies)
The other areas that concern him are the enterprise business that Idea is trying to build and a contrarian handset business it has in its fold. While companies like Reliance Communications, Bharti Airtel and Vodafone India have pursued the business of companies who need critical bandwidth and data solutions, Idea somewhere lost the plot. Kapania also feels that for high-speed data services to boom, handsets will be an important driver. So, Idea started selling handsets with its own brand in 2012 and although the company has sold just 8.5 lakh handsets, Kapania remains bullish.

In 3G services, like in voice, Kapania's rural-first strategy remains unchanged. The needs of data users' in rural India are not very different from that of customers in Indian cities, he believes. Access to spectrum will hold the key to that ambition and analysts believe Kapania is on a good wicket. "The management indicated that revenue growth could be maintained in high-teens with data adoption as a key catalyst. We believe recent equity issuance and healthy cash generation create sufficient room for participation in spectrum auctions," Hitesh Shah, Director, Equity Research (IT services, internet and telecom) at IDFC Securities, wrote in an October report.

Does Kapania regret anything? Yes, despite his share of successes, there is one. He hasn't found time to play a hand of bridge, a card game he picked up in engineering college and is good at, since 2007. Idea shareholders will be less wistful.