The TCS CEO foresees at least $4 billion of the company's revenue in the next five years coming from digital offerings. 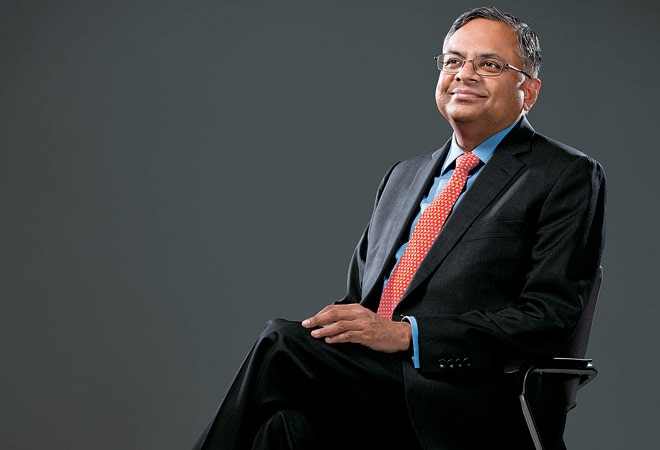 When the iPhone 6 was launched in September, one of the first persons to buy it was N. Chandrasekaran, CEO of Tata Consultancy Services (TCS). The 51-year-old was on a business trip to New York but managed to walk up to an Apple Store to buy a piece.

Chandra, as his colleagues fondly call him, is a gadget freak. He owns more than 500 gadgets, mostly smartphones - from a Samsung Galaxy Note 4 to the latest Motorola phone and tablets of all sizes. "I buy a new smartphone within 24 hours of its launch," he says. One of his favourite gadgets is his Polar Watch, which helps him track his fitness. Chandra is an avid runner and is a regular at the New York, Amsterdam and Mumbai marathons. He spends a lot of time with these gadgets to understand how one could use them in business. The company had recently provided technology to a bank in Belgium to set up an all-mobile lender. The bank has no physical branches and all transactions are conducted through mobile.

TCS has also built technology for a car insurance company in the US where the insurer can observe how the person is driving and get a sense of the car's performance through an app, based on which the policy is framed and the premium is calculated.

About N. Chandrasekaran
Chandrasekaran says everything the company would do from now on would have a digital flavour. He says that in the next five years at least $4 billion to $5 billion of TCS's revenue would come from digital. "Every once in a while technology makes a big disruption. This time the disruption is because of mobiles, smartphones and social media. It's far-reaching," he says.

Stressing the need to adopt the digital way, Chandra says, "The question is not whether you have an opportunity to adopt; you are actually in the middle of it. Whether you like it or not, what you say is going to be tweeted. Whether you like it or not, somebody will take a picture of you and put it on social media. We are in the middle of it, so we have to deal with it." He says digital world acronyms such as "LOL" (short for laughing out loud) have become a part of life that one has to accept.

LOL he should be right now, as he has emerged the best CEO for the second consecutive year. TCS's revenue and net profit have more than doubled since Chandra took over as CEO in October 2009. Total income has grown at a compound annual pace of 31 per cent and profit has risen 36 per cent in the past three years. In comparison, rival Wipro's revenue and profits have risen by only 15 per cent.

Satya Ramaswamy, Vice President and Head of Digital Enterprise, TCS, says it is Chandra's sense of timing that has given the company a clear edge over competition. "He realised that digital was the way forward way back in 2010 and has been consistently encouraging the team to invest in digital capabilities and solutions," says Ramaswamy.

"Every once in a while technology makes a big disruption. This time the disruption is because of mobiles, smartphones and social media. It's far-reaching"

Chandrasekaran has coined a term 'Default is Digital', as he believes that every aspect of the human life has a digital side to it. "Everything is real time and I almost feel the only thing that is not public is what you are thinking. With the progress in cognitive sciences, a few years from now, even what you think will be public," he says.

The first step he took towards positioning TCS as a digitally-savvy technology company is by making his own place of work completely digital and getting his own workforce to think and act digital. "The CEO told us we had to practice what we preach. We can't be merely preaching digital," says Krish Ashok, Head, Social Media and Workplace Re-Imagination, TCS.

In the past two years TCS has created over 3,600 online social communities for its employees to interact. These communities are not just work related; they are on fitness, photography, technology and so on. There is a platform, Know Me, which is the equivalent of Facebook, meant only for TCS employees. The company has at least 20 internal apps which the employees can access on iOS and Android.

One of Chandra's favourite is Just Ask. "If you have a doubt or there is anything that you want to know, just go and ask and within a minute 10,000 people are responding," he says. These tools have enabled his employees to communicate with each other openly. With 70 per cent of TCS workforce being Gen-Y - people born in the 1980s and early 90s - digital tools have come in extremely handy to communicate with them.

In fact, the company sometime back moved to the practice of wearing smart causals to work instead of stiff formal wear. This, says Ashok, was thanks to a campaign started by a young employee on their platform, Know Me. "The campaign received a large number of likes and the policy was changed."

Chandra, however, is not too active in any of these platforms. "Initially, I was posting a lot and then I kind of stepped back. I don't want it to become a top-down thing where everybody is waiting for what I am going to say. The point is for people to communicate, network, so that the company functions through our communication medium."

Chandra isn't active even on the public social media platforms. He says he doesn't have time for it. He does have a Twitter account where he follows people, but seldom tweets. "I use Twitter mostly as an information tool. I have a 16-year-old at home, so, I exactly know how it works. He is all the time thumbing, reading online. So, I am reasonably savvy."

In 2012, TCS started an exercise called Digital Re-Imagination. The idea was to re-imagine the clients' business on the pillars of Big Data, mobility, social media, cloud and so on. "In the last two years he himself has been spearheading in-depth research that the company has been doing on how Big Data, cloud and social media have been impacting lives of consumers. Very few people have the kind of knowledge he has," says Ramaswamy.

The other nominees: Very large companies
Pradeep Mukherjee, President and Managing Director at Avasant, a consultancy, agrees that a focus on digital platforms has become imperative for all technology companies. Mukherjee believes that among the current lot it is Accenture which has a clear edge in digital solutions. "However, TCS under the dynamic leadership of Chandra is fast-catching up. I am sure they will soon be market leaders in the digital space too."

TCS has been consistently coming up with digital solutions. One of the recent solutions, says Ramaswamy, is a Big Data system for a diesel engine manufacturer for trucks, that predicts the failure of the engine. "The Big Data system fitted in the engine sends a message saying that the engine requires a service and also tells them about the nearest service centre," he says.

Chandra says TCS recently helped a US retailer re-think its customer strategy by helping it create a digital platform that tracked its customers' shopping behaviour not just at the stores but also online. This has helped the retailer do real-time promotions. "It has resulted in higher sales for the retailer," he claims.

He says five years from now digital will become the mainstream business of all software services companies. "Today we call digital as cloud, social, mobile, Big Data analytics and so on, but that will keep changing as on top of these technologies, you are building more technologies like 3D printing, the Internet of Things and so on."

How we ranked India's Best CEOs