There is work, and there is life. India's best CEOs share their mantras for work-life balance.
Team BT | Print Edition: Dec 21, 2014 There is work, and there is life. India's best CEOs share their mantras for work-life balance.

An avid runner, he sports a Polar Watch to track his fitness. "I get to know how many km I run, my heart rate and what rate I am comfortable with," he says. He is also known for his gadget craze. "When a new gadget is launched, I buy it within 24 hours. From Apple, Samsung, Motorola, every new device that comes, I buy it."

He exits office at sharp 5:30 pm. and heads for the gym. Even while travelling, the 63-year-old never misses a workout. There is no airport gym in the world where he hasn't worked out. "He didn't find a gym at the Johannesburg airport, so he walked up and down the terminal for an hour," says Vijay Subramaniam, ex-CEO of Marico's international business division. A sports enthusiast, he makes time for a game of badminton every evening. His daughter, Rayna, is a junior national champion in swimming. Six months ago. he launched Glenmark Aquatic Foundation to spot and nurture talented swimmers. The larger objective is to help India win an Olympic medal in swimming by 2020. His childhood passion for music has stayed with him. "I have a guru who teaches the right way of singing bhajans. It gives me a lot of energy," says Iyer, who loves songs of Mukesh and Manna Dey, among others. His car is full of music CDs. "My driver is either a beneficiary or a victim of my singing," quips Iyer. 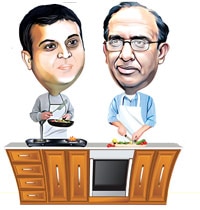 Both of them revel in their culinary skills. While Mehan can cook a wholesome Punjabi meal, Kumar loves to experiment in the kitchen. For Mehan, wife Anu gives a testimonial. "Whenever he finds time or when children talk of a new recipe, he tries it out," she says. Kumar's interest, however, is not limited to cooking as his friends often talk about the good collection of paintings he has. During his leisure time, when he is not engrossed in a book, Prasad leaves for the woods with his camera. In May 2013, he held an exhibition of the pictures he and his friend had shot in Botswana, Maharashtra and Andhra Pradesh. His cell phone goes to DND mode after 4:30 pm. So no wonder he plays golf four times a week. "I also play bridge. I travel four to five times a year and read a lot of history and philosophy. I admire Napoleon and read a lot about him," he says.

He turned towards fitness when his hefty frame started troubling his weak left knee. In Mumbai, Mistry uses a stationary cycle at least once or twice a day. "I am lucky I am never hungry," he says. 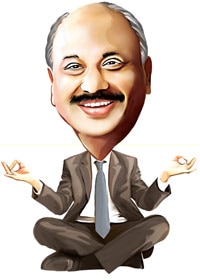 He practises yoga and meditation for two hours every day. "I watch Telugu movies with my grand kids. Wherever I am, I make it a point to fly back to Bangalore to spend the weekend with the family," he says.