Bharti Airtel vs Reliance Communications - The race is on

Both companies are riding the telecom boom and growing fast, but there’s little to suggest that the #2 will overtake the leader anytime soon.

Ashok Jain, 50, Chairman And Managing Director, Arihant Capital Market, a listed stock broking firm, prefers the Reliance Communications stock compared to that of Bharti Airtel. And why not? In the current financial year (till November 19, 2007), Reliance Communications has posted the biggest gains among telecom stocks, rising 69 per cent against 19 per cent by Bharti Airtel. The average for telecom companies is 54 per cent. “Unlocking of value from the tower businesses of both companies and the listing of (submarine cable company) Flag Telecom are the triggers for the stocks. Growth in the sector will continue unabated over the next two years,” says Jain.

Bharti Airtel and Reliance Communications, which together account for 42 per cent of total cellular subscribers in India, are the primary drivers of the sector's impressive performance on the bourses. 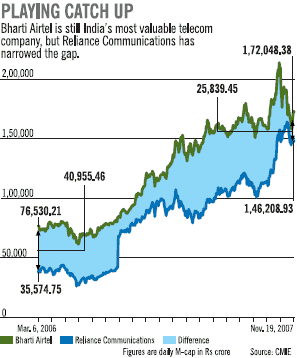 Says Shriram Iyer, Head (Research), Edelweiss Securities: “The recent rally in the Reliance Communications stock is driven by its intention of launching GSM services within one year of receiving spectrum.”

The company enjoys a market share of nearly 18 per cent, but in circles where the company provides both CDMA (Code Division Multiple Access) and GSM (Global System of Mobile Communication) services, this rises to 30 per cent.

Although the seven circles where it has dual services are small, the market expects Reliance Communications to significantly improve market share once it launches GSM operations. 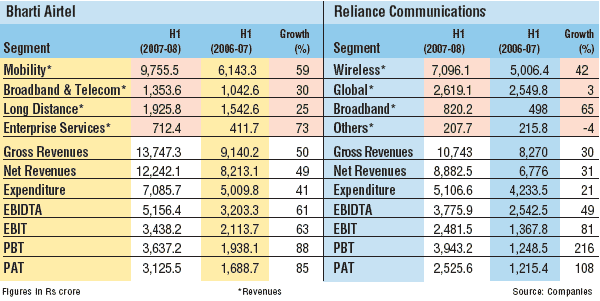