Use dipper at night,” suggests a signboard on Jaydev Vihar, a crucial link road in Bhubaneswar. This six-lane thoroughfare, which links the city’s IT hub with the airport, betrays no signs of the heavy downpour the night before. There are no potholes, and, therefore, no puddles, and no waterlogging. But singling out Jaydev Vihar for praise will be unfair. The story is no different across most parts of the city. Big players: The Infosys campus in Bhubaneswar
That isn’t the only blessing for residents of the city. They also enjoy one of the lowest power tariffs in the country and get adequate piped water each day. “Bhubaneswar is the new star of the east,” says T.V. Mohandas Pai, Director, Human Resources, Infosys Technologies. He should know, considering that his company and Satyam Computer Services have been the two IT companies to have remained invested in the city for 10 years.

They aren’t alone. Bhubaneswar is increasingly seen as an attractive city to a wide variety of potential investors. “Over the last three years, investors have committed investments worth Rs 6,00,000 crore in Orissa,” says Naveen Patnaik, Chief Minister of the state, adding: “And the MoUs that have been signed are not just steel plants but also for investments in the aluminium, IT, tourism, hospitality, healthcare and education sectors.”

South Korean steel major POSCO and the world’s largest steel company, Arcelor Mittal, have each announced Rs 50,000-crore plans to set up 12-million-tonne steel plants in the state. Then, Tata Steel has committed investments of Rs 25,000 crore; it is setting up a 6 million-tonne steel plant at Kalinga Nagar, a port in Damra and plans a SEZ in Gopalpur. Naturally, a lot of their offices and other infrastructure will come up in Bhubaneswar.

These are the headlinegrabbing investment proposals. Even as the national media agonises over the excruciatingly slow progress of these projects, several other smaller investments are slowly transforming Bhubaneswar.

Vishal K. Dev, Managing Director, IDCO (Orissa Industrial Infrastructure Development Corporation) and Director, Information Technology, in the state, points out that ICICI Bank is planning to set up its eastern regional hub, which will employ 10,000 people, in the city. BPO powerhouse Genpact is also planning a 5,000-seat call centre here that will become operational over the next 12 to 15 months.

Then, software company MindTree is setting up its third campus, after Bangalore and Chennai, in Bhubaneswar. And IT majors like TCS, Wipro and Satyam Computer Services plan to aggressively ramp up their existing operations in the city. Dev adds that the number of IT units in the city has doubled over the last four years.

Why are so many big names of the corporate world making a beeline for Bhubaneswar? “It’s a planned city and offers a good standard of living,” says H.M. Nerurkar, Chief Operating Officer, Tata Steel. Adds Kasi Raju, COO, Care Hospitals: “Bhubaneswar is in the right growth corridor and has the potential to become a major hub for knowledge-based industries and also for manufacturing units. A major attraction is that costs are still relatively low in the region.” Care, a Hyderabad-based hospital group known for cardiac care, opened a 100-bed hospital in Bhubaneswar last year. It is in the process of acquiring five acres of land to set up a new 300-bed facility that will be ready by 2010.

This is just an example of how the healthcare infrastructure has improved in the city. It now has dozens of big and small private hospitals, many of them at par with the best in the country, compared to the situation a few years ago, when there were only government hospitals. 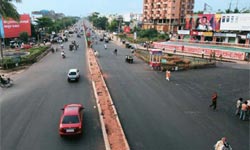 Bhubaneswar Roads: City roads are free of potholes and waterlogging
Educational infrastructure of a reasonably high quality has also sprung up. “Over the last year alone, 17 new engineering colleges have come up. Today, there are a total of 63 colleges that churn out 20,000 engineers every year,” says IDCO’s Dev.

“I’m happy that more companies are coming in. One of the major reasons for attrition in Bhubaneswar is the absence of companies in which the spouses of our employees can work,” says Abhijit Sen, Associate Vice President, Divisional Manager and Centre Head, Bhubaneswar, for Infosys Technologies. Over the last three years, Infosys’s head count in the city has grown from 1,200 to more than 3,000.

The clincher, for many companies, is the peaceful law and order situation in the city. “I can tell you that operations here have never been impacted because of any law and order problem,” says Sanjay Kumar Tripathy, Team Lead, Corporate Services, Satyam. 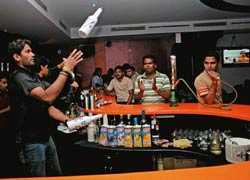 A local pub: Watering holes like liquid are popular with the young in Bhubaneswar
But there’s more to a city than just a good law and order situation and free-flowing traffic. A big problem is that entertainment options in Bhubaneswar fall way short of requirements.

This is obviously a big put off for the young and the upwardly mobile. There is still no multiplex in the city and only a handful of malls. But this may be about to change. Says Kishore Biyani, Founder CEO of Future Group, who already has two Big Bazaar stores and one Pantaloon outlet in the city: “I feel Bhubaneswar has all the right ingredients for modern retail. It is a new city with a young population. As a growing centre, it is generating wealth, which has to be consumed somewhere. I see this as a city with immense potential.”

The yearning to consume is as apparent among the young here as elsewhere in the country. On a visit to Liquid, one of the few hip hangouts in this still sleepy city, this correspondent found young executives sipping Mojito and listening to popular Bollywood remixes at 11 p. m., just like their counterparts in any other major city. 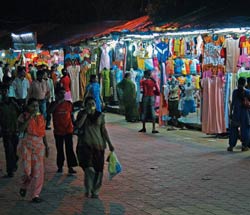 Shops Ahoy: Only a few malls in the city
Interestingly, the lack of many entertainment options has increased the popularity of gyms. “Gyms are full every evening. After work, many of our young employees hit the gym, the swimming pool or the basketball courts, while some others have signed up for Salsa lessons,” says Sen of Infosys. Since all of this is offered on campus, it is quite common to see employees hanging out in the campus after work.

Then, there’s another issue that the city will have to deal with as it grows—it has no public transport system to speak of. This will have to change fast if Chief Minister Naveen Patnaik has to realise his dream of turning his capital city into the best in India. But well-wishers advise caution. “Bhubaneswar should ensure that it does not make the mistakes that some other cities have made. It should plan ahead so that it is not overwhelmed by the growth that seems around the corner,” says Infosys’s Pai. “Bhubaneswar,” he adds, “needs to focus on thinking ahead and faster. It must build capacities, enhance water supply, have ring roads and a good public transport system.”In short, the message to those at the helm in the city is quite unambiguous: the road is clear; use the dipper; it’s always good to be careful, but speed up.