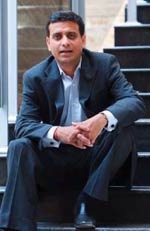 Bilcare’s Mehrotra
Over the past three years, revenues and net profits of pharmaceutical-packaging firm Bilcare have soared four-fold and three-fold, respectively. That growth has coincided with four acquisitions it made in the US, the UK and Singapore. In 2005, Bilcare plunged into the highly-regulated US market by acquiring the assets of Pro Clinical, a pharmaceutical packaging firm. Close on the heels of this buyout came three more.

Result? Revenues from international operations, in the first nine months of the year ended March 2009, have doubled to 40 per cent from 20 per cent in the year ended March 2007. During this period the companies’ revenues have grown 40 per cent, implying that the international portfolio had plenty to do with that growth rate. “The speed of growth has been because of our strategy of mergers and acquisitions (M&A),” says Vineet Mehrotra, Vice-President (Finance), Bilcare. He adds that the M&A burst helped the company save 12-15 months in getting to market. Like drugs, pharmaceuticals-packaging products also need regulatory approvals, and this exercise can prove time-consuming.

But the triggers for the acquisitions were not just size and time. In the US, for instance, other than Pro Clinical, Bilcare has also acquired International Labs, a packagingsolutions firm, along with MeadWestvaco Corp. The Puneheadquartered company felt it needed to be present in the US because of the sheer opportunity that exists in that market. That’s because 7-8 per cent of the drugs sold in the US are counterfeit, and one way to reduce that number is with better packaging.

The US pharma industry is estimated to be as large as $300 billion, so the addressable market in terms of just counterfeit drugs is a mind-boggling $21 billion. Bilcare has consciously looked to make small buyouts—the largest purchase so far has been for $15 million, of Singular ID in Singapore, a provider of technology for anticounterfeiting and brand-security products and services—and then proceed to grow them organically.

Bilcare has realised the importance of promoting interaction between the four firms acquired rather than allowing them to work in silos. Just one example: A lot of the research & development activity is shared between the various businesses. Despite acquisitions in high-cost centres, Bilcare has no plans to shift them to India. Reason: Locational advantages, logistics, and being close to the customer. Singular ID in Singapore, for instance, is very close to the Changi airport, enabling clients to visit the site while in transit rather than make special visits. Then, the port facilities in Singapore, too, are top-notch—it takes just 30-35 days for a shipment to reach any part of the world, compared to 65 days from India. Throw in a 10-year-tax holiday, and a Singapore buyout is indeed a compelling proposition.