The inside story of how Indian realty industry has become the repository of illicit money. Its dalliance with black money goes back a long way.

2010: The prospective buyer of a two-bedroom flat in Andheri East is offered three different prices by a small-time builder depending upon the amount of black money he is ready to pay. If he wants an 'all-white' deal, or makes payment only by cheque, he is told he must pay Rs 78 lakh. If he is ready to pay at least Rs 5 lakh in cash, the same flat will be cheaper and cost him Rs 70 lakh. If he can fork out Rs 13 lakh in cash, it will come at Rs 65 lakh.

2011: A deal for a one-bedroom apartment in Kurla, not far from the other property at Andheri East, falls through. The broker, a reputed stock exchange-listed entity, has no inhibitions about openly insisting on a Rs 17-19 lakh cash payment for a Rs 52-lakh property he is selling. The buyer is told that unless the black money is paid the deal cannot go through. Click here to Enlarge
These are representative examples of negotiations that are an integral part of virtually every real estate transaction in Mumbai. If the demand for cash payments is greater this year than before, it is only because the realty industry is currently facing a cash crunch, which has made it more dependent on black money.

This is an industry that has always been a massive repository for unaccounted cash. Its dalliance with black money goes back a long way. But there has been a distinctive change. Says Arpinder Singh, head of forensics at Ernst & Young: "Taxes were significantly higher in the 1970s and 1980s, which prompted people to show their real estate deals as much smaller than they actually were, and thereby evade tax. Now, black money does not get generated due to this reason only, but it flows in and out of the industry due to many other factors as well." 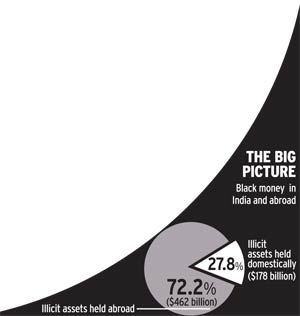 Cash obtained illegally has to be invested and realty provides an excellent option for doing so. Consider the example of the IAS couple in Bhopal, Tinu and Arvind Joshi, who were arrested in January this year for possession of unaccounted wealth estimated at about Rs 360 crore. Most of their assets comprised apartments bought in different Indian cities.

A study by Global Financial Integrity, a Washington-based anticorruption watchdog, titled The Drivers and Dynamics of Illicit Financial Flows from India: 1948-2008, concluded that the size of India's black money economy was nearly half its gross domestic product. It analysed data to suggest that 72 per cent of the illicit money generated in India since Independence - around $462 billion - had been stashed abroad. But the rest, a staggering $180 billion is still in India, mostly in real estate. 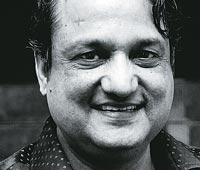 Last year a major forensics investor was asked by a large realtor in Mumbai to audit its operations for tracing black money. His probe found that some of the realtor's own employees in the Sales Department were asking customers to pay five per cent of the cost of the property they were buying, in cash. This money was then shared between the sales personnel and the firm's broker, while being shown as a discount to the customer in the company's account books. In fact, the customer was paying the full price.

"Wealthy builders flaunting their opulence are a common sight at the bungalows and offices of politicians." Adds Sunil Mantri, Chairman of Sunil Mantri Realty Ltd and President of Maharashtra Council of Housing Industry: "A lot of people have black money. Real estate is the best place to park such money in, and a lot of politicians, bureaucrats and some businessmen are doing so."

A former CBI officer, who did not want his identity revealed, explains the modus operandi. "The politician or bureaucrat's illegal income is handed over in cash to a money launderer in India. The launderer deposits an equivalent sum in foreign exchange in Mauritius or some other tax haven, where it becomes perfectly legitimate. A company is then formed in the tax haven which invests the politician's money in a real estate company in India as FDI," he says. The politician here gets preferential shares in the company in India at a low price. When he needs his money, the politician can sell the shares at market price to raise it. The real estate company practically functions like a bank for the politician, sometimes even charging him a percentage for the service rendered. Says Rohit Mahajan, Executive Director of forensic services at KPMG: "There are many people who provide hawala services as a side business. It is an alternative system of managing money, where not just India but businesses all over the world are involved. It just bypasses the law." There are interesting ways of settling a hawala deal too, say experts. A consignment is very often under-invoiced, so the businessman pays less for it officially and then sells the goods at market price and the surplus is his due for some hawala payment that he had facilitated before. According to Mahajan, some of the biggest generators of black money are educational trusts.

There are laws in place to check the role of black money in real estate. The Benami Transactions (Prohibition) Act empowers investigating agencies to summarily take over a property if it is proved to be 'benami', or nominally in a particular person's name while having been paid for and actually belonging to, another. But with politicians and bureaucrats themselves the biggest offenders, the act, passed in the 1980s when Rajiv Gandhi was prime minister, has never been enforced rigorously.

Black money is also used in real estate transactions to avoid paying stamp duty - the duty charged by the state on sale or purchase of property. The lower the officially declared price, the lower the paid stamp duty. In Maharashtra, the original Bombay Stamps Act, 1958, has been amended, so that those who undervalue properties drastically are not able to get away with it. The District Collector assesses the property's market value and if the sale amount the buyer has declared is lower, he is made to pay the difference in stamp duty, along with a penalty.

But the discretion allowed to the Collector ends up making the law itself a further source of corruption. "The only way to fix this is to remove the discretionary powers from the hands of an individual to a committee which does not know who the buyer and seller are," says Singh. Ultimately, efforts to extirpate black money from the realty industry are unlikely to succeed unless they are led from within the industry itself.
TweetYoutube

'Peanuts to the nation'