The picture isn’t totally dismal. A handful of promoters has been successful in acquiring land, largely by keeping the local population’s needs in mind.

Last fortnight, Vasundhara Raje, Chief Minister of Rajasthan, inaugurated Mahindra World City, Jaipur’s IT special economic zone (SEZ). The 750-acre IT SEZ is part of a larger 2,600-acre multi-product SEZ, which expects to attract investments of Rs 10,000 crore and create 100,000 jobs by 2012. This is the Mahindra & Mahindra (M&M) Group’s second SEZ that is up and running; the first started operations in Chennai three years ago.

Arun Nanda, Executive Director, M&M
The Mahindras are perhaps the only Indian business group to have been successful in translating their SEZ blueprints into on-ground infrastructure. True, they’re smaller than the massive zones that the likes of Mukesh Ambani have on the drawing board (the Chennai SEZ is spread over 1,500 acres, some 23,500 acres smaller than what Ambani is planning in Haryana); also, the Mahindras began early, and spent a fair amount of time on the learning curve (the Chennai SEZ was in the works for a decade). Yet, the M&M Group’s success at acquiring land without upsetting the local populace in both Chennai and Jaipur could be a handy case study for most implementers of megaprojects.

At the heart of the Mahindras’ land acquisition game plan has been a desire to win the confidence of the people in the regions they’ve entered. And they’ve done that by first investing in commercial and social infrastructure. The temptation for many developers is to create housing infrastructure first as that can generate revenues quickly. Says Arun Nanda, Executive Director, M&M, and head of the group’s infrastructure business: “Our first focus is on creating commercial infrastructure.

This enhances the value of the land and creates employment. The increased commercial activity also benefits the local people.” Also, when acquiring land in Jaipur, M&M factored in another 100 per cent in its total land costs.

Reason? A key clause in its negotiations was that it would return a fourth of the land acquired back to the land owners, after developing it—much more than what was mandatorily required. “The government had offered us land at the official rates and we could have pursued that. Instead, we went for a negotiated rate and that way, while our total cost went up by a little, our time to market reduced significantly. The land cost is only 20 per cent of the total expenditure. On the other hand it has taken us just two years to get cracking—we signed up for the project in 2006 and we have now inaugurated it in 2008,” says Nanda.

The Mahindras don’t get involved in the process of giving back land— that’s the government’s job, which does it via a lottery system. Along with the Mahindras, a handful of industrialists appears to be making steady progress in their land acquisition and rehabilitation & resettlement (R&R) endeavours. 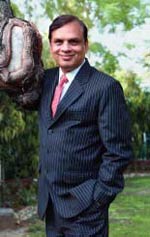 Venugopal Dhoot, Chairman, Videocon Group
The Dhoots of the Videocon Group and the Jindals have come up with formulae that are showing signs of working. Venugopal Dhoot, Chairman, Videocon Group, maintains he hasn’t faced any major roadblocks while buying land for projects in Siliguri and Asansol (in West Bengal). “We found that people preferred cash upfront. It is best to negotiate and deal with the land owners directly, pay them the price they want and also make them partners in the process. Singur is an isolated incident in West Bengal.

Videocon has built a factory in Siliguri and is buying land near Asansol. We have no problems.” Also claiming to be on a good wicket are the Jindals. JSW Bengal Steel has approached the West Bengal government to convert its steel plant at Salboni into a steel SEZ that will import iron ore from Chile. Says Biswadip Gupta, Managing Director, JSW Bengal Steel: “Our proposed steel plant site is about 35 km from Kharagpur on NH 60. We have about 4,800 acres, most of which was vested government land.

We acquired about 300 acres of private land directly from the farmers and had no issues at all.” JSW Bengal Steel also chose to offer shares as well as jobs to the displaced people.

Gupta says the process of attempting to acquire land directly from unwilling land owners is best dealt through direct communication. “One should also handle the process with as much sensitivity and dignity as possible. After all, giving away land willingly towards development is a very emotional issue for a farmer,” he adds. Then, he points out that compensation packages cannot be prescriptive.

Each case has to be worked out addressing local aspirations. Cash, jobs, shares, profit sharing, alternative land, and housing are some proposals that can be tabled. But then, there are those who claim to have robust R&R packages, but are still stuck. The best such example: the Reliance Group’s Mumbai Special Economic Zone (MSEZ) in the Raigad district of Maharashtra.

Reliance executives say the land selected for MSEZ is almost entirely un-irrigated degraded agricultural land, capable of producing only a single rain-fed crop of coarse grain. The group claims it offered farmers Rs 10 lakh per acre, five times the rate prescribed in the government’s ready reckoner. It also says it has offered to make farmers stakeholders by offering 12.5 per cent of the developed land against the area acquired; an option of encashing this offer at a rate of Rs 5 lakh per acre; and another option of a lifetime monthly pension of Rs 5,000.

What then is the roadblock to completing the total land acquisition? MSEZ officials blame “midcourse policy changes.” For example, the size of multi-product SEZs was reduced by half; the company’s R&R package was approved 18 months after it was submitted; and an amendment to the Land Acquisition Act is still pending in Parliament. Clearly, noble R&R intentions should be a priority for not just promoters but policy makers, too.