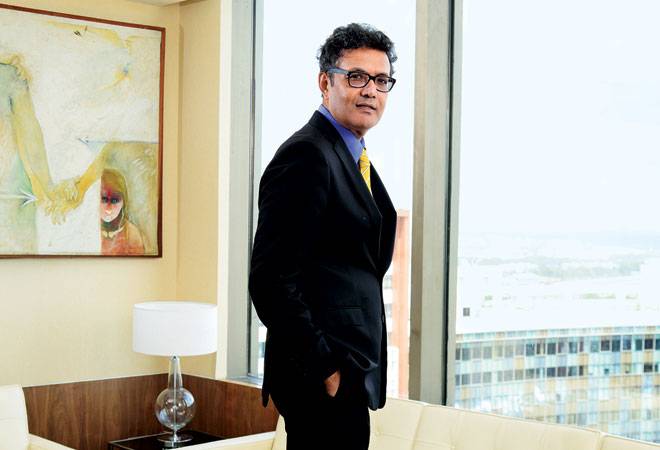 Market cap up 159.7 per cent, top-line growth of 14 per cent and 68 per cent rise in bottom line - it has been a dream run for Britannia Industries, the Rs 7,850-crore (consolidated revenues) biscuit and dairy products manufacturer, in 2014/15. There is an obvious sense of pride and satisfaction in the voice of the 53-year-old Managing Director (MD), Varun Berry, who says a lot of hardwork has gone into taking the company to where it is now.

When Berry stepped into the shoes of Vinita Bali a year-and-a-half ago, Britannia was among the country's leading biscuit makers, but with quite a few missing links. "The company was sitting on past laurels, was laid back, and not really bothered about offering consumers delightful products, the fundamental ingredient for the success of any food company," he says.

Britannia was way behind market leader Parle Products in market share and ITC Foods was clearly the rising star in biscuits. With popular products such as Chocofills and Chocomeltz, ITC was taking the market, especially its top end, by storm. "We had not come up with an innovative product for a long time," says Berry.

In fact, if rumours are to be believed, one of the major reasons Chairman Nusli Wadia preferred Berry was Vinita Bali's inability to expand market share in biscuits, the company's core business. Under Bali, Britannia had also diversified into a lot of new categories such as oats that did not yield the desired returns. In biscuits, too, the focus was too much on health. The company, for instance, launched biscuits for diabetics. These had few takers, as most Indians buy food more for taste than nutrition.

"ITC came up with delightful innovations in biscuits and stole the show," says A. Mahendran, Chairman & MD, Global Consumer Products. He was earlier the MD of Godrej Consumer Products. "Britannia has benefited more from low commodity prices. There is a mismatch between its top line and bottom line growth," he says. Prices of commodities such as sugar and wheat have fallen 25 to 30 per cent in the last one year, which has helped the company register healthy volume growth.

Berry agrees that falling commodity prices have helped volumes but asserts that the company also invested heavily in expanding the distribution network and improving the product pipeline. In March 2015, the company's products were available in one million outlets, as against 7.5 lakh one-and-a-half year ago. The last one year, he says, has been spent in putting together cost-optimisation strategies related to ingredients, packaging and distribution. "Our biscuits travel hundreds of kilometres to reach consumers. So, we asked ourselves if we should open smaller factories across the country? Though we set up a couple of larger factories, we reduced distribution costs by making products that were more in demand in that geography. This increased profitability." 'ITC came up with delightful innovations in biscuits and stole the show,' says A Mahendran, Chairman & MD, Global Consumer Products. (Photo: Rachit Goswami)
He also took tough calls like consolidation of stock-keeping units or SKUs. Britannia had 250 SKUs of biscuits, cakes and rusks, besides 120 SKUs of dairy products. Around 80 biscuit and 65 dairy SKUs were axed. "We feared this could impact volumes, but we also believed that this way we would be able to do justice to the bigger SKUs," says Berry. The company also identified blockbuster brands such as GoodDay, Nutrichoice, Milk Bikis, 50:50 and Tiger and made extra efforts to develop them.

When Berry joined the company in 2012, his foremost concern was that its biscuits were not as delicious as that of competition. But even more worrisome was the lack of urge to innovate. So, instead of product innovation, he first decided to put his team in place and rejig the distribution network.

He got rid of as many as 300 people from the sales team. "We strengthened our team despite this. We did so by empowering people and making them responsible and accountable. In the earlier structure, we had sales coaches, who were not responsible for sales. This to my mind was a no-no."

Berry spent 30 per cent of his early days hand-picking the core team. While it would have been easier to get people from outside, he decided to groom in-house talent to ensure that the team didn't feel alienated. "Today, seven people out of the 10 who report to me are from Britannia itself."

Britannia has been known to be skewed towards urban markets. Its competitor Parle (with Parle G and Monaco) is more associated with rural markets. To change this, Berry decided to strengthen the rural presence. "We set up a hub-and-spoke rural distribution model and within a year increased our rural reach by over 8,000 outlets. Today, rural is growing faster than urban."

Abneesh Roy, Associate Director (Institutional Equities - Research), Edelweiss Securities, in a recent report said that Britannia's rural share, especially in the Hindi belt (where Parle has a distinct edge), is one-fifth of Parle's. Berry says their focus during the next few months will be on rural penetration. He plans to bring the entire range of Britannia's value brands under the Tiger umbrella, targeted at rural markets.

The premium segment, Britannia's stronghold, has seen the launch of a lot of innovative products such as Goodday Chunkies, Nutrichoice Heavens, Chocolush and Rum & Raisin Cakes. Berry believes this segment will bring incremental growth.

To make distribution in urban areas more efficient, Berry built a split route model wherein the 250-odd SKUs were divided between two salespersons. "Earlier, one salesperson used to walk into a store. Now, two people go, each with different SKUs. This has helped us put more SKUs in stores," says Berry.

Analysts feel Britannia still has a lot of work to do before it can match ITC in innovation. According to Peshwa Acharya, former Chief Marketing Officer of Reliance Retail and currently founder of a marketing accelerator firm, thinkaconsumer.com, Britannia's biggest plus is that it is synonymous with biscuits. "Britannia should use this to create more biscuit consumption opportunities. It could focus on the taste-plus-nutrition proposition."

Both Acharya and Mahendran feel that it is crucial for the company to put its innovation pipeline on the treadmill.

Berry's vision is to make Britannia a Rs 20,000 crore company in the next five years. He plans to do this not just by investing in biscuits but also in adjacent categories. He doesn't specify the categories but says chocolates, snacks and breakfast could be some areas of interest.

Berry is also focusing on the Rs 400-crore dairy business. "We will announce our dairy strategy in the next three-four months." The plan, he says, is to look at an integrated strategy, which will include a clear milk collection and processing model. Britannia at present works with contract manufacturers, which he thinks isn't viable.

Berry is hopeful about global operations whose turnover has doubled in the last one year from Rs 300 crore to Rs 600 crore. Britannia exports its products to around 72 countries and has production facilities in the UAE and Oman. "I want our international business to contribute at least 25 per cent to revenues in the next few years."

When asked what is the one big change that has happened in the company in the last one year, he says, "It is much more competitive now. There is absolutely no room for inertia."

India's most valuable companies for 2015