Vivek Chaand Sehgal has driven Motherson Sumi Systems at breakneck speed to the top of the Indian auto components industry. 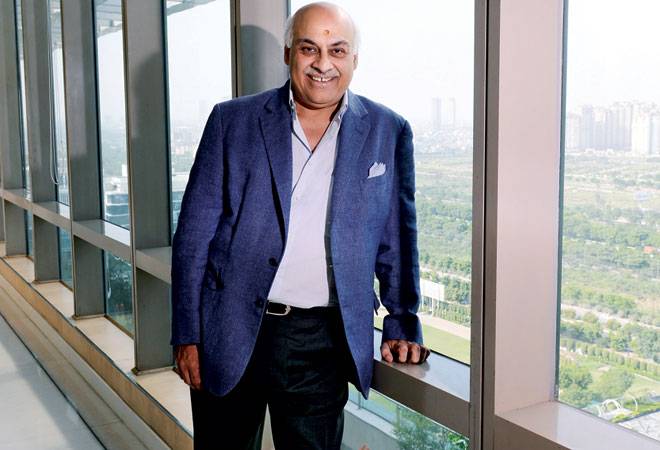 There are few companies that can match the pace of growth of Motherson Sumi Systems (MSSL). Starting from a humble T-Couple maker for the Maruti 800, the quintessential car that changed mobility in India, and Rs 83 crore revenues in 1999, MSSL is now a Rs 35,000-crore ($5.4-billion, consolidated revenues) entity, with profits of Rs 1,291 crore. It all started with a meagre Rs 1,000 'seed capital' that first-generation entrepreneur Vivek Chaand Sehgal took from his mother to make electrical wires. For decades, MSSL remained a small player in the auto component industry. In 2009, as the world reeled from the aftershocks of the Lehman crisis, MSSL hit gold with the acquisition of UK-based Visiocorp's global rear view mirror business. Sehgal bought Visiocorp, a $750-million company, for $32 million in a stock cum cash deal.

MOTHERSON SUMI SYSTEMS
Source: CMIE Prowess, Standalone data
"We saw opportunity in recession and Visiocorp made us truly global," says Sehgal, recalling the calculated risk that changed the course of his business. Following the Visiocorp buy, MSSL's consolidated revenues went from Rs 2,595 crore in March 2009 to Rs 6,702 crore in March 2010. But it wasn't just about the revenues; the deal's implications went much beyond that. Visiocorp came to MSSL along with its subsidiaries, and gave the buyer world leadership in a product MSSL wasn't strong in; access to 16 manufacturing plants in 12 countries, including Hungry, Mexico, Brazil, China and Australia; and marquee customers including the likes of BMW, GM, Ford, Peugeot-Citroen, Hyundai, Renault-Nissan and Volkswagen. Like its peers, MSSL initially grew by supplying core components to Maruti Suzuki. Its specialisation was wiring harnesses
And then, in 2011, came the bigger buy, of distressed German polymer major Peguform. Sehgal bought the company, which had revenues of $1.5 billion in 2010, for $82 million for its 80 per cent stake. That took Motherson's revenues (consolidated) up from Rs 8,175 crore in 2011 to Rs 14,702 crore in March 2012. Peguform gave him a product line-up that included door trims, dashboards and plastic mouldings, manufacturing across seven countries, and world class customers like Porsche and Mercedes-Benz. "We always acquire what our customers suggest," says Sehgal. "It's not a case of acquiring just an overseas asset, but an opportunity to serve our customers better."

Today, MSSL has 145 manufacturing plants in 25 countries across the world, and sees 85 per cent of its revenues coming from overseas.

Faith, and the five-year plan

As a Group, Motherson has acquired 16 companies in the past decade. That is less than the 22 acquired by the Arvind Dham-owned Amtek Group, but MSSL has raced past all its competitors in terms of turnover and valuations. Only a decade ago, MSSL was a fringe player in the domestic circuit, with companies like Bharat Forge, Sundaram Fasteners, Rane Group, Sona Koyo, Shriram Pistons, Asahi India, Subros,and Lumax Industries ruling the roost.

Pune-based Bharat Forge was the poster boy of the Indian component industry, exporting products like axles, crank shafts and connecting rods to Europe and the US. It was billed to strengthen its position as the largest player on the back of huge orders from its overseas clients, but failed to capitalise on the growing sector as it started moving into non-auto areas.

Sources in the component industry say that most of these players' operations were restricted to the domestic market with some exposure to exports, but they avoided the risky inorganic route that catapulted MSSL as well as Amtek Group into multi-billion dollar entities, which others can't match today. Today, Bharat Forge has consolidated revenues of Rs 7,761 crore, and Amtek Auto, Rs 15,700 crore.

His peers say that his strength lies in constructing relationships. Sehgal's first joint-venture with Japanese firm Sumitomo has gone from strength to strength and continues to generate immense wealth for all. "Japanese are great partners if you keep their trust," says a New Delhi-based component maker. "Sumitomo has given MSSL huge support right from initial joint venture when they ignored his liabilities and assessed the company only on its net asset value."

Like its peers, MSSL initially grew by supplying core components to Maruti Suzuki. MSSL's specialisation was wiring harnesses, which is one of the smallest electrical components for any car, but critical for its technical functioning. "Initially, we continued to focus on our primary business of electric harnesses," says Sehgal. "The consistent growth in absolute volumes helped us lay the foundation to move beyond to automotive mirrors and plastics."

And how has MSSL grown so consistently over the years? Sehgal credits that to a simple Excel sheet, where he maps the volumes he expects to produce in five years, based on his customers' growth plans. Unlike the Indian government's five-year plans, MSSL's plans have mostly exceeded targets.

The first five-year plan happened when the company had revenues of just Rs 14 crore, and it set a revenue target of Rs 100 crore for the next five years, much to the bemusement of his team. "Two of my team members quit, saying this man has gone mad," chuckles Sehgal. "We missed it by almost a fifth, purely on external reasons - as Maruti Udyog's (then a different name) sales dipped." But it gave Sehgal the confidence to move ahead. The next five-year target was comfortably achieved. "Later we achieved a handsome 50 per cent gain over our 2010 targets, hitting $1.5-billion turnover for the first time," he says. "Subsequently, the confidence for such high aims helped us to become a Rs 40,000 crore entity." As a group, Samvardhana Motherson has revenues of Rs 43,000 crore.

What's the five-year target now for 2020? It is a rather ambitious $26 billion or Rs 1.6 lakh crore. If achieved, MSSL would comprise almost 50 per cent of the entire component industry's turnover. "We have been called crazy every time we set these five-year targets," Sehgal says, smiling from ear to ear. "Nobody believes us when we start." There are reasons behind Sehgal's confidence. Currently, 14 new plants are coming up overseas and four more are being added in India, enlarging the product portfolio to over 1,100. "The facilities that we are creating would form the foundation of our growth over the coming five years," the company said in an investor presentation.

Expectedly, analysts tracking the component industry remain sceptical on the target, but do not rule out their achievement. "Motherson has been a clear exception across all players," says Gaurav Vangaal, Senior Analyst at IHS Automotive, a global forecasting firm. "Many companies have sold their foreign assets on failure to turn them around or simple management failures. Motherson has not just made its foreign subsidiaries sustainable, but it has a unique ability to strengthen bonds with global carmakers through these acquisitions with strong inflow of orders and technology."

"His model of meeting specific needs of automakers makes him unique and couldn't be emulated by others who largely remain dependent on aftermarket supplies to keep their facilities up and running," says Vinnie Mehta, Director General of Automotive Component Manufacturers' Association of India, the apex body of component makers. For the record, MSSL has no presence in India's automotive aftermarket.

Of course, Sehgal's ride to fame and riches has not been without bumps. He was almost on the verge of bankruptcy with the acquisition of Visiocorp that was much harder to turn around than he expected. The second shock came in 2012, when the IPO of Samvardhana Motherson Finance Ltd., a group holding company, had to be withdrawn on poor investor response. And the latest hit is the alleged emission cheating case of one of his largest European customers, Volkswagen Group, involving over 11 million cars that has tanked MSSL shares on fears of repercussions on his global operations. Sehgal, though, insists the VW scandal will not impact his business.

If there's one thing about Sehgal that you can't miss, it is his broad, unwavering smile. Tricky questions don't faze him. He doesn't plan strategies to meet his targets. And he doesn't see any challenges for his company's growth. Reason? When times are good, business is obviously good. And when times are bad, business is better because he can acquire companies at throwaway prices. He loves to live life well - he has driven almost every luxury car in the world and owns several, he loves golf, loves music, with Kishore Kumar being the favourite. His senior managers all have luxury cars, and also get plum overseas postings with every new acquisition. He doesn't think much of MBAs or IIT grads, preferring to hire people from smaller, relatively unknown institutes.

And, he doesn't take stress; he has tension. "It's like a musical instrument - if the strings are not at the right tension, they won't work," he explains.

That would likely tense up the rest of the auto component fraternity.

How we ranked India's top 500 companies

All the big Indian pharma cos are showing growth