Organic products are those made entirely from natural substances, which in turn have been grown eschewing the use of artificial chemicals, fertilisers and pesticides.
Print Edition: Jan 19, 2014 Little did Karnesh Mahendru expect while launching EcoTokri, an e-commerce site that sells only organic products, last October that the most popular items would be organic lipsticks and organic kajal, followed by organic coconut oil. EcoTokri sells everything from organic tea and flour to organic soaps and accessories and solar nuru lights, but organic cosmetics contribute 60 to 70 per cent to its overall sales.

Among those providing EcoTokri with these organic cosmetics is Soul Tree. Founded in 2008, Soul Tree was primarily into exports, but from last year has also starting selling in the domestic market, through sites such as EcoTokri and Natural Mantra as well as brickand-mortar niche organic stores. Vishal Bhandari, Founder and Director, Soul Tree, says his products are made entirely from herbs, organic ghee, organic almond oil and mineral colours. "My business has seen a growth of 80 per cent year-on-year since it began." Mahendru too is upbeat, maintaining his site is growing at 30 to 40 per cent monthon-month. "More and more people are looking for green and healthy alternatives. Traffic to my site has increased 200 per cent in the last six months. What's still more amazing is that 40 per cent of my orders are coming from Tier II and III towns." 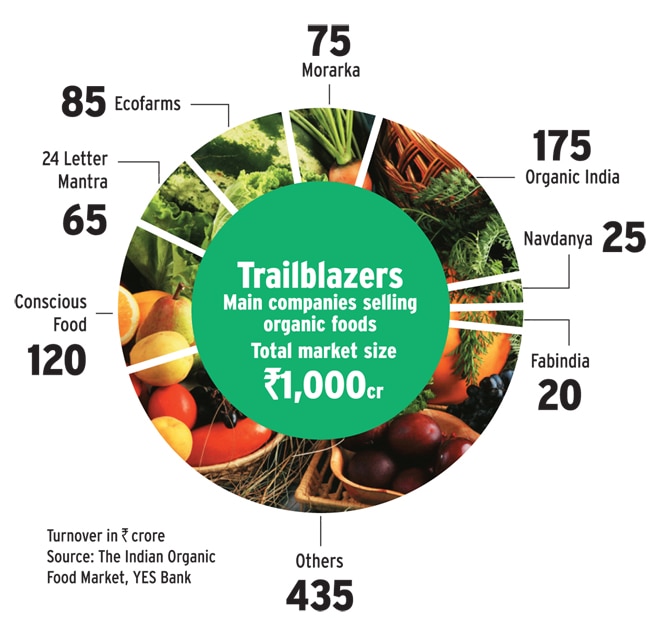 Organic products are those made entirely from natural substances, which in turn have been grown eschewing the use of artificial chemicals, fertilisers and pesticides. Although nascent, the Indian organic food market has begun growing rapidly. According to a YES Bank report in 2012, it was estimated at Rs 1,000 crore ($170 million) - of which Rs700 crore came from exports - and is growing at 30 to 40 per cent annually. The country has 4.43 million hectare under organic cultivation with a total organic certified production of 171,100 tonne. In comparison, the US organic foods market is worth $26 billion, the European, $10 billion.

But a beginning has certainly been made. Organic India, one of the biggest in the business, has seen its revenue rise from Rs 25 crore in 2008 to Rs 175 crore in 2013. Best known for its Tulsi Tea, it makes a range of organic products and has grown so confident of the market's potential that it is setting up its own standalone stores. "We have opened two stores in Lucknow and aim to have 20 stores across the country by the end of 2015," says Krishna Gupta, CEO and Managing Director, Organic India. It has also launched new products such as organic ghee (using milk from cows fed only organic grass and fodder) and organic chyawanprash.

Conscious Food, perhaps the oldest in the business, launched almost 25 years ago by eco-nutritionist Kavita Mukhi, has grown at a compound annual growth rate of nearly 35 per cent in the last four years to reach revenues of Rs120 crore. It sells organic sweeteners - honey, raw sugar, jaggery - along with cereals and pulses. "We never had an active sales organisation," says Kurien Mathew, Director, Conscious Food. "That is now being put in place. We will also promote the benefits of going organic."

Consumers of organic products cut across income groups and regions but they are all people acutely aware of the health hazards of chemicals and pesticides. "With the amount of food adulteration going on in India, we thought we should enter the organic food industry and provide an alternative," says Kriti Mehrotra, who started Organic Tattva in 2012, which sells both imported and locally made organic products. Overseas trips showed her how big organic foods were elsewhere, with entire supermarkets in the US devoted to them. "We visited exhibitions in Germany for organic products and began importing juices, breakfast cereal, pastas, sauces and dry fruit, all made organically, from different countries. For Indian staples, we set up a manufacturing unit where we clean, grade and package grocery items," she adds. 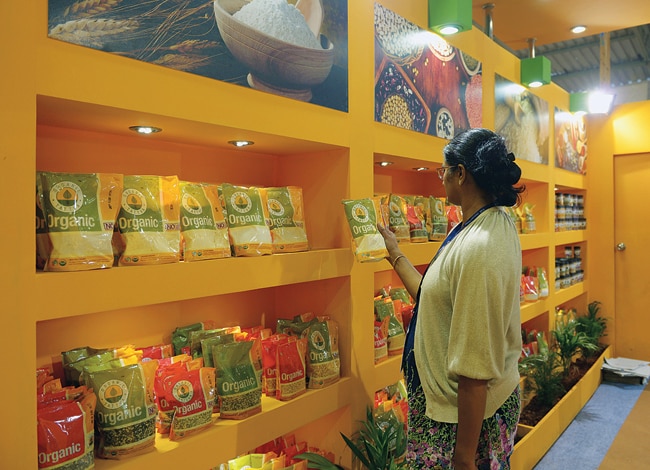 An organic food trade fair in Bangalore Photo: Nilotpal Baruah
Like Soul Tree, many other organic product manufacturers, who earlier were mainly into exports, have woken up to the increasing interest in such products within the country. Bangalore-based Mother India Farms, for instance, used to export the organic fruit pulp, dehydrated fruit and vegetables and a variety of spices it produced to France, Germany and The Netherlands. But now it has a growing Indian market as well. "Sensing the market gap in organic fruit juices in India, we launched a mango-flavoured organic fruit beverage in 2012, under the brand name Organa. We now sell organic guava juice, organic apple juice and organic mango pulp here as well," says Gopinath R. Durairaj, Director of Operations, Mother India Farms.

The segment has even begun to attract private equity and venture capital firms. Organic food manufacturer 24 Letter Mantra, for instance, got $15 million from Peepul Capital in 2011, while rival Suminter India Organics got $3 million from Nexus India Capital in 2008. In March this year, leading retailer Fabindia acquired a 40 per cent stake in Organic India for Rs15 crore.

There are other changes afoot. Conscious Food's Mukhi has since moved on to begin Farmer's Market, an agency that helps people buy chemicalfree vegetables and fruit sold directly by farmers every Sunday at Mumbai's Maharashtra Nature Park. Restaurants that provide only organic fare have also sprouted. Navdanya, an NGO engaged in organic farming and much else, has set up an organic foods café at Dilli Haat, Delhi. "The café has done so well we will be starting another one in the National Capital Region next year," says Rahul Shiva, Marketing Manager, Navdanya.

'Indians should aim for perfection in their endeavours'