Companies have been listed on the basis of market capitalisation, but for a better understanding, they have also been ranked separately on other parameters.
Print Edition: Nov 10, 2013 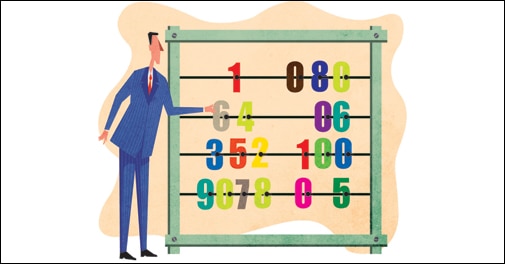 Number crunching the BT 500 data is a fascinating exercise. It reveals not only which are the most valuable companies in India and in what order, but also throws light on how corporate India has been performing across a multitude of parameters. The exercise becomes all the more significant when the economy hits a downturn, as at present. The data pinpoints both the spots where companies are suffering pain, as also how a few of them are effectively managing and mitigating that pain.

The extent of stress this year can be gauged from the fact that the aggregate total income and net profit of the BT 500 companies rose by just 0.1 per cent and the net profit margin remained flat at 7.7 per cent compared to the previous year. The aggregate market capitalisation grew 0.06 per cent.

Our rankings were reached through a rigorous process of evaluation. There has been no change in the methodology this year - the 23rd edition of BT 500 rankings - from previous years. We ranked only listed companies on the basis of their average market capitalisation for a period of six months. We also ranked them separately on other financial parameters and compared their performance this year to last year's.

The Process: We relied on Prowess, the database of the Centre for Monitoring Indian Economy (CMIE). We screened all 5,183 companies listed on the Bombay Stock Exchange and National Stock Exchange. We considered the six months average market capitalisation between April and September 2013 of each of these companies. To avoid including less traded stocks, we excluded illiquid companies that traded for less than 20 per cent - that is 25 days - out of the total number of trading days (126) between April 1 and September 30, 2013. In all 3,146 companies qualified for the ranking and from that list we picked the top 1,000.

Financial Parameters: The market capitalisation of a company captures investors' sentiment towards it, which also takes into account its financial performance. For a better understanding of the corporate scenario, we have also separately ranked companies on parameters such as Total Assets, Total Income, Net Profit, etc and provided additional information such as profit as percentage of total income, return on net worth (RoNW), return on capital employed (RoCE), and earnings per share (EPS) apart from the main ranking. For all the financial parameters used we have considered the financial year ended March 2013; in case of exceptions, we have specified them in footnotes. We have used standalone numbers - not consolidated results - for all companies.

India's Most Valuable Companies - The Top 500

BT500: Market cap of most cable companies has soared