With consistent growth behind it, as well as the merger with Mahindra Satyam in June, Tech Mahindra is trying to enter the top league of Indian IT companies.
E. Kumar Sharma | Print Edition: Nov 10, 2013 The event marked a milestone for scandal-hit Satyam Computer Services, which had been left to fend for itself after its founder, B. Ramalinga Raju, sent out a letter in January 2009 informing them of corporate fraud within the company. Three months later that year, Mahindra Group acquired the company and gave it a new identity: Mahindra Satyam.

Nayyar's mail made it clear that Satyam's firefighting days were over. With one move, it had become part of a huge $2.7-billion (Rs 14,544.2-crore) entity, the fifth-largest IT company in the country by revenue, behind only TCS, Infosys, Wipro and HCL Technologies. (Cognizant is a US-registered company.) Moreover, its stock has leapt more than 45 per cent since the merger, propelling it into BT 500's top 100 for the first time since the ranking was started in 1992. It ranks 64 in the latest survey.

"In the three-four years since Tech Mahindra acquired Satyam, the two companies have accomplished a lot," says Sudin Apte, CEO and Research Director of research company Offshore Insights. "They have got over the initial turbulence from the change of management and have stabilised the business and customer base of Mahindra Satyam."

The company's trajectory has been in line with Mahindra Group Chairman Anand Mahindra's ambitions. Two weeks after Tech Mahindra acquired Satyam Computer Services in April 2009, he had declared: "I don't believe this is a sinking ship. No longer. This may not be a racing craft yet, but it is our task to make it one." Nayyar was equally determined but a bit guarded at the time.  "I do believe that Satyam can be one of the top companies in India not only in competence but also in earning capability. Will it happen tomorrow? Definitely not. Will it happen in the next few years? I hope it will and we are determined to do so," he had said.

So, what next? Tech Mahindra has now set its sights on cracking the big league by growing into a $5-billion company by the end of 2015. How does it plan to get there? Simple, through internal growth as well as acquisitions and joint ventures. "It is not a guidance. It is a mission-to-the-moon kind of a goal," says C.P. Gurnani, Managing Director and CEO of the company. "If you are at $2.7 billion and give yourself 10 quarters, you can at best add over 30 per cent and maybe get to $4 billion or so. The rest will have to come through acquisitions and joint ventures."

A key part of Tech Mahindra's strategy to achieve its target is changing the way it conducts its operations. Gurnani has set up a five-member team to look at performance management and says the aim is to achieve zero defects in delivery and compress delivery timelines. Tech Mahindra is  also looking at acquiring companies in its key areas such as telecom and digital enterprise solutions to meet its growth targets.

With over Rs 3,000 crore in its pocket and the backing of the $16.2-billion Mahindra group, it has already been shopping around. Tech Mahindra has picked up a majority stake in Complex IT, one-of-the largest SAP consulting providers in Brazil, to develop solutions for the rapidly expanding enterprise solutions market in Brazil. The deal gives it a toehold into proprietary solutions for large manufacturing, financial and consumer services companies in the market. "Tech Mahindra today stands between tier one and tier two Indian IT companies," says Thomas Reuner, Principal Analyst, IT services at UK-based analyst house Ovum. "It is a difficult position to be in because they have to reach scale and reach more geographically. It stands out through its strong focus on telecommunications." 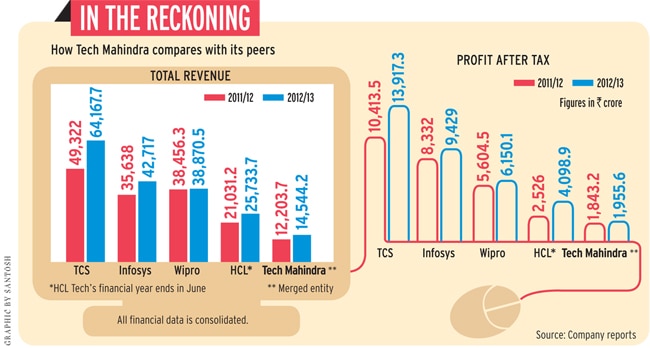 Tech Mahindra has also acquired Hutchison Global Services and a 51 per cent stake in Bharti Enterprises-controlled Comviva Technologies. The Hutchison deal strengthens its telecom domain expertise while the Comviva stake gives it an edge in mobile value-added services. Its other acquisitions were vCustomer in the retail and consumer technology business and Dion Global in the capital markets solutions business. Market watchers say Tech Mahindra was also one of the bidders for the services business of Chennai-based software firm Polaris Financial Technologies. "We would be looking at those that can bridge some gaps in our service offerings, we will look at some platforms, some cloud-based companies and those that get us new markets," says Gurnani. Milind Kulkarni, CFO, Tech Mahindra, adds: "We are looking at PE or EBIDTA multiples that are low, where we can add value."

Despite the push in information technology, telecom remains Tech Mahindra's biggest edge. It accounts for 48 per cent of the company's revenues, with one of its biggest clients, British Telecom, contributing nearly 13 per cent to its coffers. "We want to do more by cross-selling. We want to sell enterprise solutions to telecom; and sell telecom products to the enterprise customer," says Kulkarni. Kiran Karnik, a government-appointed director on the Satyam board after Raju's era until the Mahindras took over, agrees. "They are well-positioned as they have the fundamental things in terms of their skill-sets. It is for them to now  move from being an organisation with an IT-services centric outlook to one with a more domain and skill-based approach and be able to come out with innovative new applications." 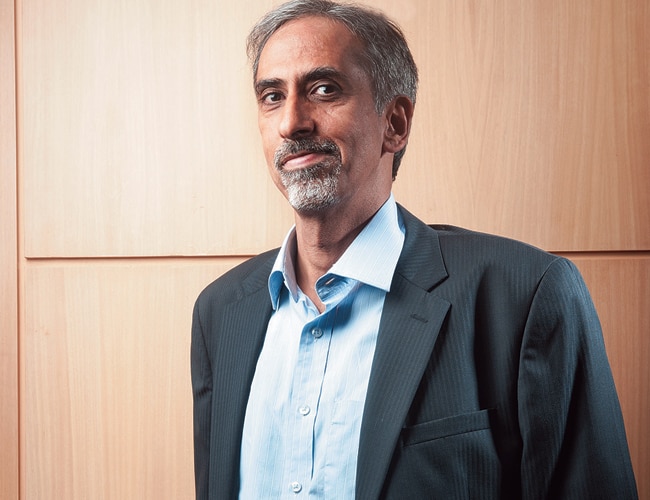 'We want to do more by cross-selling. We want to sell enterprise solutions to telecom, and sell telecom products to the enterprise customer,' says Milind Kulkarni, CFO, Tech Mahindra (PHOTO: DANESH JASSAWALA/www.indiatodayimages.com)
But some analysts are sceptical about Tech Mahindra cracking the big league. They say it is in a new bracket between giants such as TCS with over $10 billion (Rs 64,167.7 crore) revenues and second-tier companies such as iGate with revenues of  over  $1 billion. Offshore Insights believes Tech Mahindra's depth of industry domain capabilities is limited. "They call it industry domain or vertical practices, but primarily focus on technologies or products used there. In contrast, the top three Indian vendors are organised by verticals and have deeper capabilities at micro-segments and the business process level," it says based on its research findings.

Apte of Offshore Insights says Tech Mahindra may continue to lag the top five who will keep their edge because they will continue to grow at a similar pace. "By the time they achieve, if at all, their revenue target of $5 billion, the top five of the offshore industry (including Cognizant) will have marched much further ahead," he says. "However, among the tier-two companies behind the top five, they will probably emerge as a promising, fast-growing, and aggressive leader. In select verticals and service lines, they may even become tough competition to top companies in the offshore industry."

But Gurnani is confident. His bedside reading reflects his attitude. He is currently reading former Microsoft India Chairman Ravi Ventakesan's book, Conquering the Chaos: Win in India, Win Everywhere. Clearly, winning is on the top of his mind.

Just Dial's market valuation has soared after a successful IPO