Okay, so there is a property market correction in the national capital region, but don’t bet your money on it—at least not right now. 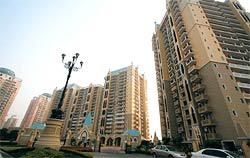 Residential prices are softening in Gurgaon
When Major Sunil Thomas and his wife Rupa, a senior executive with a leading hotel chain, went house hunting a month ago, their first choice was the upmarket south Delhi residential colonies. “We did find a 1,900-sq. ft apartment in South Extension for a rent of Rs 18,000 but the security deposit of Rs 1.5 lakh was too high,” recalls Rupa. Finally, the couple found a place in northwest Delhi’s Rohini—a three-bedroom, 1,700-sq. ft apartment for a rent of Rs 8,000 without a security deposit.

Ten days later, the couple learnt about a friend of theirs who had managed to strike a deal for a flat in South Extension—similar to the one they had checked out earlier— for just Rs 14,000.

If the Thomases felt a little peeved, they are not alone, though for them, being closer to Rupa’s parents, who also reside in Rohini, mattered more.

But what this confirms is what everyone has been suspecting all along—real estate prices in the capital are headed southwards even if only in some select pockets. Says Sanjay Verma, Executive Managing Director (South Asia, Australia and New Zealand), Cushman & Wakefield: “Delhi’s suburban and peripheral areas— Gurgaon and Noida—are seeing a softening in their residential markets. Even in south Delhi, prices appear to have stabilised, although not much new supply is expected.” That might prompt bargainseekers to reach for their chequebooks, but it could be too early for that because builders and brokers prefer to wait it out than to give in to the first signals of a market trend.

In fact, says Sanjay Chandra, Managing Director, Unitech, Delhi’s and NCR’s residential real estate will not decline. “Not just in south Delhi, but prices in other parts of the city will also increase by 10-12 per cent,” says Chandra.

As for commercial real estate, Verma says while rents have stopped rising, they are unlikely to fall, even in the central business district of Connaught Place.

And while commercial rentals could soften in Gurgaon and Noida towards the end of 2008 or the beginning of next year, if there is a correction, most observers say, it will happen in the retail space, particularly in malls where excess supply and sluggish returns for mall tenants could force developers to lower their rental rates.