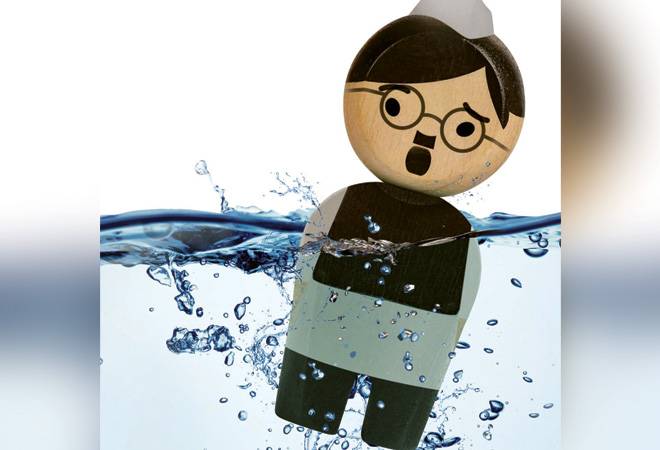 For three decades up to the 2008 global financial crisis, China's gross domestic product (GDP) grew close to double digits. Government debt to GDP remained low at 20-25 per cent. As growth rate slipped to 6-7 per cent after that, government debt started getting out of hand. The debt-to-GDP ratio of the world's second-largest economy has almost doubled to 55 per cent in the last decade. This has been a result of China's massive investment push to create more capacity as the export engine slowed after the global meltdown. Many say even the 55 per cent figure is an understatement. In fact, international rating agencies often look at Chinese debt numbers with a pinch of salt due to heavy off-balance sheet borrowings.

Is India, too, showing signs of running into something similar? The economy is slowing. GDP growth fell to a six-year low of 5 per cent in the first quarter of 2019/20. International rating agency Moody's has cut the 2019 calendar year GDP growth forecast from 6.8 per cent to 6.2 per cent. The parallels are unmistakable. Like China, Indian policy makers have stepped up public spending in the last few years, though to balance the lack of private sector investments (again due to heavy debt).

Government general debt touched 69 per cent of GDP in 2018/19, up from 60.7 per cent six years ago. Given the likely global recession and weakness in the domestic market as consumption - the one growth engine running well for years - also slows due to banking and NBFC liquidity crisis, the government's target of reducing this to 60 per cent in the next five years is challenging (see Rising Levels). The situation is so bad that the Centre spends close to one-fourth of its yearly Budget on interest payments. About 90 per cent yearly borrowings go into paying interest on past debts, leaving little for the more productive capital investments. A sustained higher borrowing means higher inflation, more interest burden will mean lesser resources for public expenditure, higher borrowing costs for companies and fall in value of the rupee against the US dollar - all in all, a perfect storm.

India's combined fiscal deficit, at 6.9 per cent of GDP, is one of the highest among the G-20 countries. Only Argentina, at 7 per cent, is ahead. In fact, Viral Acharya, the former RBI deputy governor, had quoted a former central banker of Argentina to make a strong statement about the likely consequence of interfering with the autonomy of central banks. This was when the government first talked about dipping into the RBI's surplus capital, a move that bore fruit last week when the central bank accepted the recommendations of the Bimal Jalan Committee for transfer of an additional Rs 52,637 crore surplus to the government. Though this will shore up the government's balance sheet, it is likely to be seen by international rating agencies in a negative light, a sign of financial distress. India also seems to be taking a leaf out of the Chinese government's off-balance sheet borrowings, which are attracting the attention of rating agencies. "Off-balance sheet borrowings are over 1.5 per cent of GDP," says Arun Singh, Chief Economist at Dun & Bradstreet. A weak fiscal position is a big reason India's sovereign ratings have not been upgraded for years now.

In the 1990s, too, the government had a large fiscal deficit. India's debt-to-GDP ratio touched 77.4 per cent in 1991/92. The problem got compounded because of rise in oil prices, currency depreciation and trade as well as current account deficit. This led to a huge balance of payments crisis. Similarly, in 2001/02, the economy was in the slow growth mode, and the Kargil war took place. The global economy was also in bad shape after the 9/11 attacks. The debt to GDP ratio rose to a high of 84.2 per cent. Is India hurtling towards a similar crisis?

The Economic Survey this year warned that a slowing economy would impact revenue collections. "GDP slowdown could impact the debt servicing numbers," it warned. Weak growth numbers are a partial cause of government debt build-up, Credit Suisse said in a recent study. The CAG data shows that net tax collections in the first quarter (April-June) of the current financial year rose just 6.3 per cent from the year-ago period. This is way below the yearly target of 11 per cent. In fact, the government barely achieved its net tax collection target of Rs 14.84 lakh crore in 2018/19.

One way of managing fiscal deficit is reducing expenditure. This will worsen the slowdown and lead to a downward spiral as government spending is the only growth engine that has been working in the absence of private sector investments. Plus, it is not easy to cut funds already committed for key schemes such as the PM Kisan, Ayushman Bharat or Fasal Bima Yojana. "If things come to cutting the capital expenditure or breaching the fiscal deficit in case of a revenue shortfall, I would suggest not cutting the capital expenditure. We don't have to worry about inflation as it is very low," says Arun Singh of Dun & Bradstreet. 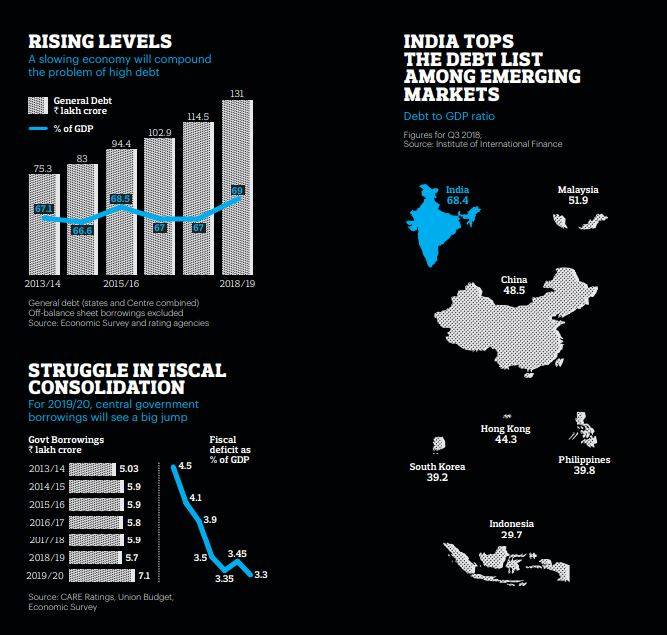 "India is staring at a silent fiscal crisis and the government should release a white paper on its medium-term targets in the backdrop of a shortfall in tax revenues," Rathin Roy, a member of the Economic Advisory Council to the Prime Minister, said recently.

Some relief has come from the RBI, which is giving another Rs 53,000 crore to the government, apart from the surplus of Rs 1.23 lakh crore generated during 2018/19, for 2019/20. Many experts are not convinced that this will help as the government had earlier wasted the oil bonanza - it had failed to lower oil prices or reduce fiscal deficit when international crude oil prices had fallen sharply in the early years of the first Narendra Modi government. In addition, the RBI surplus is a one-time bonanza and cannot be a sustainable source of revenue. Even the strategic sale of PSUs is going to be a challenge due to fall in stock markets.

The government has been resorting more and more to off-balance sheet borrowings by rolling over subsidy payments to next year and encouraging public sector entities to borrow from the market. Take, for instance, the gross revenue shortfall of Rs 1.5 lakh crore in 2018/19. The budgeted figure was Rs 24.5 lakh crore whereas the actual collection was around Rs 23 lakh crore. Then, how did the government manage to meet its fiscal deficit target of 3.4 per cent? There was actually a cut in expenditure. It did not pay a Rs 60-70,000 crore food subsidy to the Food Corporation of India (FCI). The FCI, in turn, borrowed funds to bridge the subsidy gap. "Rolling over of subsidy creates a debt burden for the FCI in the longer run," says a market expert. The CAG has pointed out that government dues to the FCI are rising because of such rollovers.

In government books, which are prepared on a cash basis, the actual paid amount is shown, while in FCI books, it is shown as accrued from government. The government pays it as soon as the next year starts. As a result, the FCI has to take loans on its books for making payments. Similarly, the NHAI debt has ballooned from Rs 40,000 crore six years ago to Rs 1.78 lakh crore. These off-balance sheet borrowings of Rs 1-1.5 lakh crore are not reflected in the general debt of 69 per cent of GDP. Viral Acharya had said at a Monetary Policy Committee meeting that the practice has inflationary implications in the longer run. "The estimates of overall public sector borrowing, which appropriately accounts for extra budgetary resources and other off-balance sheet borrowings of central and state governments, have now reached 8-9 per cent of GDP. This is at a level similar to that in 2013 at the time of the 'taper tantrum' crisis," he said. The rupee had depreciated sharply against the US dollar during taper tantrum due to foreign fund outflows after the Fed said it would end monetary easing.

Government borrowings are expected to be Rs 7.1 lakh crore in 2019/20 from Rs 5.7 lakh crore in the previous year. Pressure points are building up. A desperate government got into a running battle with the RBI for dipping its hands into the central banks surplus capital. Finally, a committee headed by Bimal Jalan pegged excess reserves at Rs 52,637 crore. The government was expecting some Rs 2-3 lakh crore but is getting less as the Jalan Committee ruled out parting with revaluation reserves. India Ratings says the surplus transfer is likely to be used to meet the revenue shortfall. With GDP growth slowing, the shortfall is likely to be high. There are other worrying signs too. "The government's reliance on the National Small Savings Fund (NSSF) has been increasing year after year," says Madan Sabnavis, Chief Economist, CARE Ratings. Borrowings from the NSSF were financing around 2 per cent of fiscal deficit six years ago. This jumped close to 20 per cent in 2019/20. "This kind of reliance on the NSSF puts tremendous pressure on banks. They cannot lower fixed deposits rates further (even though repo rates are coming down) as rates on government savings schemes, which they compete with, are much higher," says a banker.

Rising government borrowings leave little for the private sector. For this, the government had come out with an idea of taking a part of its debt in foreign currency. The plan has been apparently on the backburner after economists raised an alarm over the risks involved.

The expenditure of states now surpasses the central budget expenditure. In 2018/19, the states' budget expenditure was Rs 33.59 lakh crore compared to the Centres round Rs 27 lakh crore. The states' fiscal situation deteriorated in 2015/16 and 2016/17 as they took over the debt of Discoms under the Uday Scheme. Their borrowings are also on the rise. In 2018/19, gross borrowings are budgeted at Rs 5,50,000 crore, 2.9 per cent of GDP. "State governments are coming to raise money in the same market where the Centre is borrowing. States' borrowings have grown gradually over the years. This equation can change if GST collections improve in future," says Arun Singh of Dun & Bradstreet. In fact, borrowing costs of states are steadily rising and are more than the Centre's borrowing costs.

The recent loan waivers by states are going to put more pressure on state finances. The share of states in the combined deficit of Centre and states has been rising since 2015/16. There is also a trend of states raising borrowings from the international market. The Kerala Infrastructure Board recently became the first state government institution in India to raise money abroad. Many economists complain that states' data comes in a haphazard manner. "The data is not standardised. It comes with a lag. There is data with and without the Uday scheme," says Sabnavis.