From a wrestler endorsing a tractor to a chef selling kitchen items, companies are increasingly signing up niche celebrities to promote their brands.

A tall model complains of cramped rear leg space in a car during a photo shoot with fashion photographer Atul Kasbekar. The car is then replaced with multiutility vehicle Mahindra Xylo, and Kasbekar takes a group of gorgeous models for a drive. The models put on their make-up and snack in the vehicle, while Kasbekar stretches out to take a nap during a break. It could be a typical day in the life of India's top fashion photographer, but the photo shoot is actually part of Mahindra & Mahindra's "Happy Legs" advertising campaign for the Xylo. 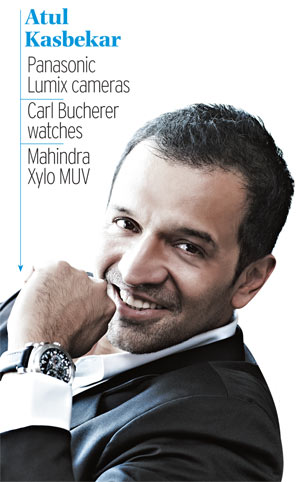 Why did Mahindra choose Kasbekar and not a popular Bollywood star or a top cricketer for this television commercial, launched in 2010? "We wanted a credible celebrity to endorse the brand and not somebody who was over-exposed," says Vivek Nayer, Chief Marketing Officer at Mahindra's automotive division. The automobile company wanted to emphasise Xylo's ample leg space while keeping its glamour quotient intact, and tall models blended well with the brand's positioning. "The script for Xylo demanded a fashion photographer, and Kasbekar was the only credible celebrity who fitted the script," adds Nayer.

Getting a well-known personality is perhaps the easiest short cut to brand-building. Bollywood superstars Amitabh Bachchan and Shah Rukh Khan as well as Indian cricket captain Mahendra Singh Dhoni each endorse more than a dozen brands.

But several companies are now breaking out of the mould. Mahindra is one such company which has signed endorsement deals with people who are very successful in their particular fields but are not necessarily well known to a wider audience.

Another company which has tied up with a niche celebrity is Cadbury. The confectionery maker has roped in film director Anurag Kashyap for an advertising campaign. Kashyap, known for making offbeat films with newcomers, features in a TV commercial for Cadbury chocolates where he is shown looking for female actors for his next movie. 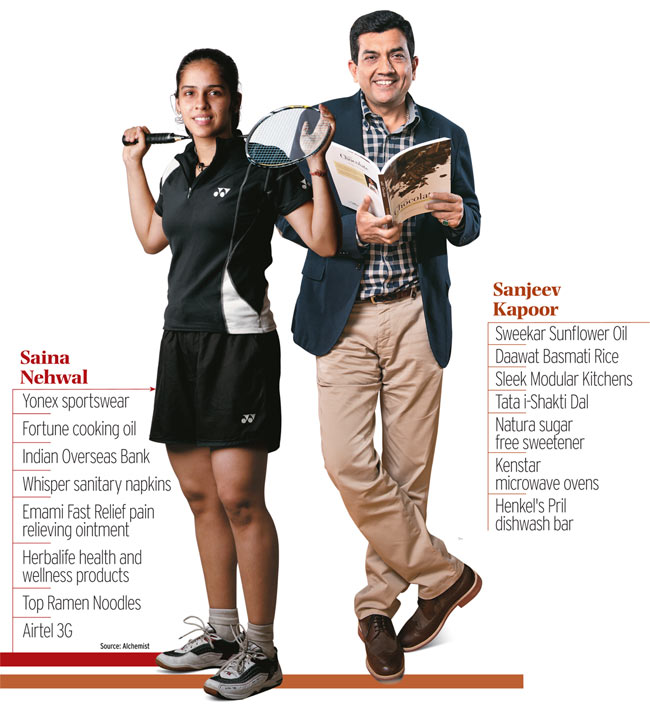 A quarter of ad campaigns in 2000 featured famous people: Manish Porwal
To be sure, the use of niche celebrities to promote a product is not a recent phenomenon. In the mid-1990s, tabla maestro Zakir Hussain endorsed Taj Mahal tea. Famous chef Sanjeev Kapoor has been promoting kitchen products and spices for several years.

But it is only in the past two to three years that brands have been actively roping in more such personalities.

Kapoor says that, of late, he has also been approached by watch makers, apparel brands and even credit card companies.

"It's a different matter that I have turned down these companies since I am more comfortable endorsing products which fit into my domain as a chef, but companies are definitely more open to looking at celebrities outside of Bollywood and cricket." Hitesh Gossain (right), Senior VP, Business Development and Strategy at Percept, says big stars often overpower the brand
Manish Porwal, Managing Director of celebrity brand consultancy Alchemist, says "a quarter of ad campaigns in 2000 featured famous people, mostly big actors and cricketers". Today, with the rise of successful people in several other fields, three in five ads have a known face, he says. According to Alchemist, celebrity endorsement is a Rs 1,000 crore industry and big Bollywood stars make up almost 60 per cent of the market. Cricketers, TV actors and niche celebrities make up the rest.

The obvious reason for a brand signing up a lesser-known celebrity is lower cost. A Bollywood superstar such as Bachchan or Shah Rukh charges between Rs 6 crore and Rs 10 crore per brand. A top cricketer like Virat Kohli would take between Rs 1.5 crore and Rs 3 crore. In contrast, a niche celebrity makes Rs 50 lakh to Rs 1 crore per endorsement.

Marketers insist that other factors are equally important. "While cost is an aspect, brands are looking at niche celebrities more from a perspective of breaking the clutter," says Anirban Das Blah, Managing Director of celebrity management company CAA Kwan. Hitesh Gossain, Senior Vice President, Business Development and Strategy, Percept Talent Management, adds that companies are fast realising big stars often overpower the brand. Krishna Mohan, CEO for sales, supply chain and human capital at Emami, says the decision to rope in non-cricketers reflects the recognition that sports other than cricket are getting in India. "We wanted to associate with youth icons outside of cricket also," he says.

Photographer Kasbekar, who is also the Managing Director of celebrity management company Bling, says many companies do not want to sign big stars unless they fit a particular brand's positioning. He refers to a recent Nescafe campaign featuring actors Deepika Padukone and Purab Kohli and the music director trio Shankar-Ehsaan-Loy (all of them his clients). While Padukone and Kohli have been associated with the coffee brand for quite some time, the company wanted another pan-Indian face to reinforce the Nescafe jingle with a new campaign. "We decided to zero in upon a musician and not another actor," says Kasbekar, referring to Shankar Mahadevan.

Kavita Bhupathi Chadha, Managing Director of celebrity and sports marketing company Globosport, explains how the company got Colgate to sign up offbeat actor Rahul Bose to endorse Colgate Total toothpaste. The company wanted to convey the message that Colgate Total does not just whiten teeth but also prevents cavities and strengthens gums. It was looking for a multi-faceted personality to push the brand.

"We brought in Rahul as he is extremely credible as an actor and is also well-known for what he does outside of films," says Chadha. "It was not about economics but the right fit. Colgate could have surely afforded a bigger star, but they wanted a person who had a 360-degree approach." Celebrity management companies deal with big stars and other clients differently. For one, these companies pocket 15 to 30 per cent of a niche celebrity's earnings from endorsements, much higher than the five to seven per cent they charge big stars. One reason for the differential fee is that most big stars take care of their endorsement deals themselves while these companies just manage their events.

Most big stars also do not sign a written contract with the celebrity management companies. Lesserknown celebrities, on the other hand, sign three- to four-year contracts.

The companies take care of these clients' endorsement deals, manage the events they attend, and even decide what they say at these events. Percept's Gossain claims that the company has even invested in grooming people by providing them styling and diction lessons as well to make them marketable. He adds that he does not see an immediate impact on Vijender Singh's endorsement deals, after the boxer's name cropped up in a narcotics case recently.

Singh has reportedly denied any involvement in the case. Will these celebrities ever surpass the top actors in clinching big-ticket endorsement deals? That is unlikely. Indian companies will continue to hero-worship Bollywood superstars. But niche celebrities now provide a great alternative companies can no longer ignore.
TweetYoutube
Tags: Brand endorsement | Brand marketing | Brand promotion | Celebrity management

'We need to bring in some rationality'

Endorsement world on the hunt for big names