Three auditors reveal to BT, the dubious nexus between auditors and corporate management.

Three auditors reveal to BT, the dubious nexus between auditors and corporate management. 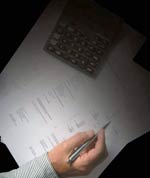 Confession 1
I had always fancied becoming a practising chartered accountant. The enormous responsibility that is bestowed upon an auditor awed me. In fact, no other career ever crossed my mind after I came to admire auditors. After completing my BCom, I joined a well respected audit firm in Chennai which has been in existence for over 40 years with a strong Income Tax and Corporate practice. The first couple of years were fun as I assisted my seniors in auditing various types of companies. Company Law particularly attracted me and soon that became my area of expertise.

It was only after I became senior enough to finalise the audits of major companies and banks on my own did the reality sink in. A few years ago, we (I and a team of 10 junior auditors) had just completed the statutory audit of a large bank. The audit brought up a large quantum of non-performing assets (NPAs) provisioning, which would result in the bank posting a loss. The bank management was terrified and kept providing last-minute documentations to reduce the NPAs which were against the norms. My auditor, to my utter shock, went along with them, knowing fully well the management’s attempts to window dress the accounts.

In the end, the NPAs were suitably diluted so as to enable the bank to post a marginal profit.

In another instance, I was given the responsibility of auditing a diversified group. During the course of the audit, we realised that the related party transactions (between group companies and partnership firms run by the promoters) were not adequately disclosed as per the provisions of the Companies Act. Transactions that were of significant value were not done at market price between the company and group firms. Also, the dues to the company from the group firms remained unpaid. In a way, a company with public shareholding was funding the operations of firms run by the promoters and their family members. This was disclosed in the initial report that I prepared after the audit. But the final report made no mention of it.

I qualified as a CA even as my three-year training came to an end. Every one in the audit firm, including the partners, thought I will join them, but by then I had lost all respect for the profession. I left the firm to take up a corporate job—a role where I have nothing to do with audit or an auditor.

Confession 2
I had taken up a plum position at one of the Big Four accounting firms. They had placed me at their office in a BRIC (Brazil, Russia, India, China) country. It was to be a new world, a new job, a new life. The excitement was hard to contain.

One of the first audits assigned to me was of the accounts of an auto major. Its operations in this country were sizeable. The portfolio of investments ran into thousands of crores of rupees. At some point during the audit, I found that as much as a quarter of the advances this company had been extended were unsecured, meaning no securities backed them. This immediately raised a bright red flag in front of me.

Unsecured advances remain harmless for as long as nothing happens. If there is a mishap, they lose value, causing catastrophes. The minimum stipulated disclosure requirements had not directed the balance sheet or the audit to reveal distinctly, the exposure to unsecured advances. A complete picture of the risk on the balance sheet, however, was required, especially since the amount was huge. As auditors are free to raise the bar on disclosers above the stipulated minimum for the benefit of society at large, I decided to include the break-up in my notes in the audit. The company, however, disagreed. Following lengthy discussions, my boss, who was the partner due to sign the audit report, overruled me.

Unaware of the risk, several investment companies that raise deposits from the public securitized the advances. A meltdown could have completely wiped out their equity bases. The hiding of the information by the company and the auditor, though not illegal, was unethical. I quit the job and returned India where I run my own audit practice.

Confession 3
Businesses today are getting exceedingly complex. People are getting more creative in executing transactions and the nature and complexity of the transactions vary from customer to customer. Often, these are brainstormed by groups of accountants, lawyers and the management before they are implemented. Many a time, an auditor does not possess the knowledge to analyse these transactions to assess their fairness, or if he does have the knowledge, he does not have enough time to come out with his opinion. In the rare circumstance, where he does possess knowledge and time, the management brings in its own team of specialists who try to beat down his opinion. If even this fails, management often falls back on a time-tested policy of bringing in another expert who certifies the veracity of the transaction and force the auditor to rely on his opinion.

There used to be a time, when an auditor was the most feared person. But in today’s competitive environment, the management merely has to express its dissatisfaction about an auditor’s performance to make him change his opinion. This, coupled with the probable loss of fancy fees paid by companies, is enough to make a die-hard independent auditor become dependent.

For an auditor to be effective, it is important that he is up-to-date with the changes happening across the world. Very often, however, the cost and the technological challenges associated with such updating result in the auditor being illequipped to meet the requirements of his clients. Rather than questioning the client, an auditor finds it easier to accept the data provided by the client by taking comfort in the fact that a decision of such a huge magnitude would not have been taken on a whim, but only after detailed analysis.

In the case of listed companies, there is a mad rush to close accounts within 15 -30 days of the close of the financial year. While audits do commence much in advance, this short period after the end of the financial year is rather insufficient to probe into the affairs of the company, especially in the last quarter when most of the decisions regarding annual revenues and expenditure are taken. With companies reporting billion dollars or more in revenues in each of their quarters, the enormity of the task of completing the audit within a span of 15 days before the close of the year can be imagined.