Currently making Rs 4 lakh in revenues per month, TommyJams wants to pull up to an ambitious million dollars per annum in a year or two. It is also shaping up to go global. 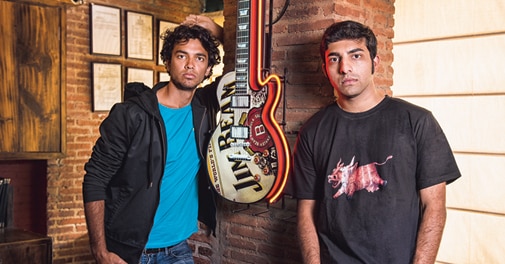 The idea struck Parth Saxena and Nikhil Kapur one evening in 2011 as they watched a band perform while chilling out at a Hard Rock Café outlet in Hyderabad. Impressed, the duo felt the band could do so much better if it had better access to venue managers who book artistes for performances. That is not done easily - in the live entertainment space, those who rake in the moolah are the ones who are the most networked and get booked for performances through contacts and referrals. So, Saxena and Kapur, techies from Delhi College of Engineering who were working with Texas Instruments and Microsoft, respectively, thought like true nerds would - a tech platform could democratise live entertainment for small and big artistes alike - by connecting them directly with pubs, bars, malls or cafes, where performances happen.

Excited enough to pursue their idea, the duo went on to learn the tricks and nuances of entrepreneurship at a Stanford University Programme in 2012 and TommyJams subsequently got incubated at Microsoft Ventures Accelerator in Bangalore in 2013. The decision to start from Bangalore came naturally to Saxena, who had worked part-time as a freelance guitarist and vocalist for different music bands in the city, and had a network of artistes and bands to tap into initially.

Partner Kapur brought in the much needed complementary skill - venue management - as he nurtured an interest in managing venues for employer Microsoft, which hosted several events.

Their first 'wow' moment came when a band called The Indus Valley Project was booked by Huckleberry, a restaurant at Indiranagar, Bangalore, and performed on the New Year eve of 2013. Two years later, their start-up called TommyJams - its name inspired by the thought that every Tom, Dick and Harry should get a chance to perform - has more than 900 music bands registered on the platform. They range from popular ones like Agam, Parvaaz and Agnee to less-known ones like The Indus Valley Project and Until We Last. "Most are run by guys between 17 and 30 years of age, mostly college students and young professionals," says Saxena, Co-founder, TommyJams.

About 300 such bands and artistes have performed at venues booked through TommyJams, translating to 600 events so far across Mumbai, Goa, Bangalore, Delhi and Chennai. One of them is Aman Mahajan, who runs a jazz band with folk music influences called Refuge, along with three other artistes. "In the last five months since I have signed up with TommyJams, we have had eight to 10 bookings across venues," says Mahajan, who would earlier approach venues through his own contacts and referrals. "The platform helped us discover a range of venues, some we didn't have direct connections with earlier."

So, how does the TommyJams platform work? "It's a new-age marketplace," sums up Mukund Mohan, CEO-in-residence at Microsoft Accelerator. Venues like bars or cafes launch their events on the site, while also posting requirements in terms of what kind of artistes they need, amount they are willing to pay, duration of the event, etc. Artistes registered on the site can respond by applying to perform. The venue manager can then take his pick, his decision influenced by past performances and the rating assigned to them by the platform.

Having bootstrapped the venture with both co-founders putting in Rs 9,000 each, the start-up broke even in the fifth month, when they had helped push about 30 to 40 shows. Money comes in through a 20 per cent cut in the fee paid to the artiste by the venue. The fledgling company currently makes Rs 4 lakh in revenues per month, which it wants to pull up to about a million dollars per annum in a year or two.

Now, ambition is a good thing, but has to be backed with intent and purpose. So, to help scale up and increase its reach, TommyJams is looking to raise external funding to grow faster - hire more designers and developers in the current four-people team. "We want to bombard one city after another," says Kapur, Co-founder.

It is also adding new features to add value. Last November, it launched a feature to crowd-fund tours for bands, allowing them to expand their reach across cities by engaging fans. This is done by partnering with multiple venues across multiple cities and creating a tour. TommyJams then launches an online campaign for the tour and gets fans to invite their favourite artiste in their city by buying the tickets in advance, hence funding the tour for the artist. Fans can opt to pay more in order to buy a band's T-shirts or other merchandise or for hanging around with the artistes after the performance. Bands like Kanchan Daniel Band and Until We Last have been funded with about 70 to 100 tickets sold in advance for a tour across Bangalore, Mumbai and Pune.

International artistes are also channelling their tours to India through TommyJams. KarmaFlamenco, a band from Spain that performed at BFlat Bar in Bangalore and at Taj Vivanta, is one. Others are The Bahh Band from Ireland, which performed at CounterCulture in Bangalore, and pop band We hide you seek from Sweden.

While the live entertainment market is growing in India - TommyJams estimates that each big city hosts about 1,200 live music events per month - giving ample opportunity to expand, Mohan at Microsoft Accelerator says one of the biggest things that the start-up needs to worry about at this stage is the stickiness of the product. "After an artiste has been booked by a venue through the site, he should keep coming back for further engagements with the venue, rather than approaching the venue directly the next time." Mohan further adds that while TommyJams should prefer looking at venues that are open to hosting a variety of artistes and audiences, what will be critical is keeping a strict control on the quality of artistes and venues on the platform.

There's competition to counter, too. The start-up will directly compete with big and small agencies that are well networked with venues, and who manage artistes and help them with bookings. These are the likes of Mumbai-based Krunk and Only Much Louder or Delhi-based Wild City. "The TommyJams platform can add value if, instead of merely serving as a database of artistes and venues, it can match the right artiste with the right venue or audiences," says Mahajan of Refuge. "Often small agents and artiste managers go wrong on that."

TommyJams now nurtures global ambitions. Its first such effort is being funded by the Startup Chile programme, which selects and funds about 100 start-ups across the globe. The programme will pump in about $40,000 in the start-up without taking any equity. Two days after we spoke to the duo, they left for Santiago, Chile - a growing start-up hub that can help them tap the live entertainment market in Latin America. "Brazil ranks among top seven live entertainment economies after the US, UK and a couple of European economies," says an excited Saxena.

Insieve predicts preferences based on searches, app use